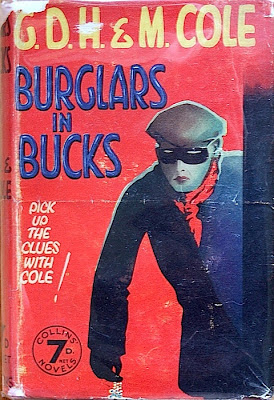 Burglars in Bucks (1930) is something of a threefold literary experiment. It is a detective novel without a murder, it has multiple points of view, and it attempts to tell a story in real time. I would also add that it reminded me more than anything of a P.G. Wodehouse novel even to the very Wodehousian title. Superintendent Wilson is on the case again in a raucous adventure subtitled "The Crime and the Poltergeist".

Essentially, the novel is presented as a chronological dossier of the written evidence gathered in the case of a burglary that occurred on Halloween night following a party in Peter Gurney's home. We are given the story through multiple accounts (both first and second hand) in a series of letters, telegrams, newspaper clippings, police memos and reports, plus a few fanciful recreations of phone calls and private conversations. In discussing writing up one of his cases with Wilson Dr. Michael Prendergast proposes the chronology idea. The case would have been solved sooner had Wilson been privy to some information not handed over until after the conclusion of the investigation. Wilson believes that any reader would be bored with a straightforward telling of a police case with only written evidence presented to him as it was received. He also thinks any reader would be able to outguess the police detective long before the solution is discovered. The doctor strongly disagrees.

This mystery without a murder proves to be intriguing. It's not just a simple story of a stolen emerald necklace. The plot will evolve into a multi-layered richness that includes con artists, false identities, black market antique trading, drug addiction, spiritualist trickery, and the looming threat of a murder charge when one of the characters is violently beaten and clings to life in a hospital for most of the book. There is even a message in code that amateur cryptographers might easily be able to break before the police do. 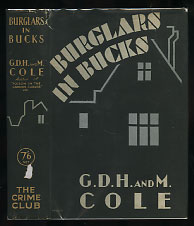 The Cole's surprising sense of humor is the real highlight of the book largely due to the inclusion of the amusing letters from Everard Blatchington, a recurring roguish character in the early Cole detective novels who might have stepped out of the halls of Blandings or Brinkley Manor. Detective novel fans who are also partial to the kind of waggish British wit and antics found in the works of P. G. Wodehouse are sure to get much enjoyment from Burglars in Bucks.

In the US the book was released as The Berkshire Mystery, but it is much scarcer than the UK edition. Though there are few copies of the UK edition I did find one reading copy for $20. It may not be there for long after this review. Better hop to it if you want it! The rest range from $40 to $100, though judging by the descriptions their condition doesn't merit those prices. Burglars in Bucks can also be found in the first Collins Crime Club Omnibus which also includes The Noose by Philip MacDonald, Q. E. D. by Lynn Brock, and Sir John Magill's Last Journey by Freeman Wills Crofts.
Posted by J F Norris at 9:54 AM