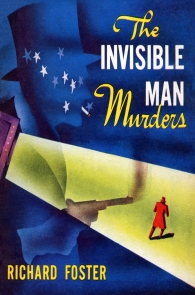 While making a movie about a murderous invisible man called The Man from Nowhere, one of the actors is shot. With the camera still rolling cast and crew stand around trying to figure out from where the gun was fired. They all watch in horror as ghostly bloody footprints materialize on the carpet making it appear that an invisible man is leaving the scene of the crime. The filmed scenes will provide a major clue to the solution. Later another actor is shot on a deserted beach. Again footprints magically appear in the sand leading to the ocean then disappear. Is there really an invisible man killing all these people?

The killer leaves taunting letters signing himself "The Man from Nowhere" and sarcastically adds the parenthetical comment "Title by courtesy of Magna Pictures, Inc". The police uncover a blackmailer who called himself the Hollywood Ghost who had been extorting percentages of movie people's salaries as a kind of "Death Insurance." The police think that the blackmailer has adopted for himself a new nickname and is killing his targeted victims when they refuse to pay up. A private detective is hired by Magna Pictures' producer to find the killer and put a stop to the killings though he seems more worried about the money he is losing with all the delays in the production schedule.

Perhaps the most notable aspect of this 1945 book apart from the unusual impossible crime gimmick is the detective himself -- Chin Kwang Kham, mysterydom's only Tibetan-American private detective. He is clearly a rip-off of Charlie Chan, though he speaks perfect English having been born and raised in the US he has the strange habit of "becoming Oriental" and talking in broken English and spouting forth fortune cookie style proverbs. At least Biggers made his aphorisms clever and witty. A cumbersome proverb like this one "The hunter who would trap the tiger must have more patience than the tiger" doesn’t compare to a genuine Chan aphorism: "Alas, mouse cannot cast shadow like elephant." Why bother, right? Foster doesn't have the gift. He comes close sometimes: "A man who continues to murder is like a man walking down a narrow mountain trail. Sooner or later he must dislodge a pebble." But he's too verbose when composing them.

The story is typical of pulp magazine fare – action oriented, heavy on dialogue, lightweight on prose. Just to separate Chin from the typical genteel and sagacious Asian detectives of the 20s and 30s Foster allows some roughhousing. In a gratuitous torture sequence Chin beats a suspect with the handle of a gun and when that doesn't get results he performs the "Death of Thousand Cuts" with a ritual Asian knife. Mike Hammer by way of Sax Rohmer. This all happens in a chapter titled "A Tibetan Warpath."

The mystery is routine. Only the impossibility of the invisible footprints offers any interest. But there is no fair play. The solution comes out of left field and is done through experiments Chin performed offstage without the reader's knowledge. There is also lots of guesswork. The method of making the footprints appear on the beach seemed extremely baroque to me and most likely would never work. Only one clue is given to the reader involving the filmed scene during which the first victim met his fate. Chin made an intelligent observation about how the camera paid close attention to the victim's death when in fact it should have been focused on another actor who was being fired at by a prop machine gun. Spotting this subtlety allowed Chin to ferret out the murderer's accomplice. It is the only piece of real fair play detection in the whole book.

"Richard Foster" is the pseudonym of Kendell Foster Crossen, a prolific pulp writer who used multiple pseudonyms under which he wrote crime and adventure fiction and dabbled in science fiction as well. Among his most notable creation is the Green Lama, a pulp hero who acquires secret powers from having studied in Tibet. His best detective novels are under the pen name "M. E. Chaber" and feature his series detective Milo March. 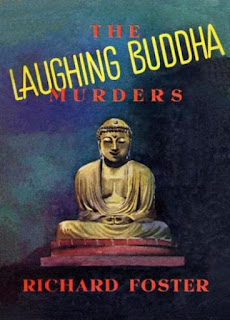 Magic and magicians are featured in The Invisible Man Murders. Crossen even includes himself (under his real name) and his magician writer friend, Bruce Elliott, in cameo appearances on the magic program that is discussed early in the book. Because of all the talk about magicians and the fact that Chin and another character are magicians and sleight of hand artists, I expected the solution to the mysterious footprints to involve stage illusions. It does not. Disappointing.

There is one other book featuring Chin Kham, The Laughing Buddha Murders (1944), also classified as an impossible crime (if I recall correctly it was about disappearing jewels), but it's really not worth reading either. Just more of the same minus the torture scenes. Both books are very scarce and as such usually offered at high prices when they turn up for sale. To my great surprise I learned that both books are available in digital formats. UPDATE April 2018: Both eBooks have since been discontinued by their makers and are permanently removed from sale.
Posted by J F Norris at 9:24 AM