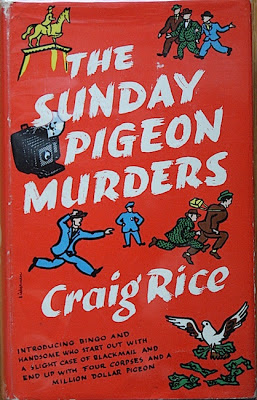 According to an ad from Simon & Schuster I found in a Saturday Review issue from 1942 Craig Rice "spent a hectic six days in New York" where she "accumulated more information about that town than we had learned in a lifetime of living in it." A bit of advertising hyperbole to be sure, but her activities included hanging out with the men of the Central Park chess clubs, discovering a newsagent who also had a sideline business of placing dime bets on horse races, and most inspiring of all she invited a street photographer home for dinner and got the lowdown on the photo racket.  He must have been a colorful fellow for it led to the creation of her little known duo of Bingo Riggs and Handsome Kusak who make their debut in The Sunday Pigeon Murders (1942).

Rice also seems to be doing a good impression of Damon Runyon in this book. Bingo and Handsome speak, act, and dress like any of those small time hoods and grifters so well known from Guys and Dolls, Bloodhounds of Broadway and The Lemon Drop Kid. Bingo is the brains of their fly-by-night street photography operation with the grandiose title of The International Foto, Motion Picture and Television Corporation of America. They aren't doing too well with only $7.49 as their operating budget, one camera in a pawnshop, and a developing room in the bathtub, but they do their best with their meager set-up. An added bonus to the business is Handsome's special gift. He has an amazing eidetic memory and can instantly recall any newspaper layout of the past ten years when he worked as a news photographer and quote verbatim from those articles.

When Handsome spots a famous missing man ("The Sunday Pigeon" of the title) thought to have disappeared over seven years ago Bingo's scheming brain goes into overdrive. Thanks, of course, to Handsome's incredible memory Bingo learns of the $500,000 insurance policy Mr. Pigeon took out on himself and is soon to be claimed by his business partner in only few days when Pigeon will be declared legally dead. Bingo will put an end to that. He is going to kidnap Mr. Pigeon and blackmail the partner into handing over half of the $500,000 when they con the insurance company into thinking Pigeon is dead. 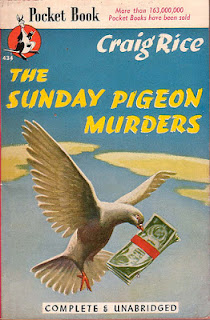 Kidnapping is not exactly accurate, though because this is a Craig Rice book. Pigeon is all too obliging as the kidnap victim. He moves in to Handsome & Bingo's tiny apartment and basically becomes a third roommate. Cooking up miracle dishes with the few scraps of food in their one room apartment, cleaning house, and not caring one iota about the fact he is involved in what amounts to insurance fraud. Does he have some ulterior motive for hiding out?

When the two photographers make their way to Pigeon's partner's apartment and find a dead body they think someone must've already caught onto their scheme. Someone who also is after the insurance money. Bingo thinks fast, jumping to many conclusions in the process. He decides to do what nearly everyone in a Craig Rice novel does when they find a corpse. He hides it choosing the refrigerator as the least likely place to look for a body. But soon they have a surprise visitor in the person of a shapely dame and the hide-the-body business turns into all out farce. They will be more people looking for Pigeon, more people turning up dead, more bodies being hidden before Pigeon reveals his secret and everything is resolved in the usual madcap Rice way.

Probably because it is Rice's first book set in New York rather than Chicago she spends a lot of time showing off her newfound knowledge and doing her best to emulate Damon Runyon. The result is a book with more endearing characters, a plot that is more cohesive than usual, and a solution that actually makes sense for a change. I'm looking forward to reading more of Bingo and Handsome in the second book The Thursday Turkey Murders.
Posted by J F Norris at 9:37 AM