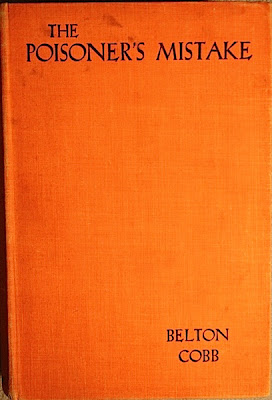 I'm not sure there are many vintage detective novels set on New Years' Eve but I serendipitously found one in The Poisoner's Mistake. I thought it would be perfect for this week's Forgotten Book as 2011 draws to a close. Belton Cobb will not be a familiar name among many of you. I only purchased the book due to its inclusion on a "Best of" list posted by Curt Evans at Mystery*File back in October 2010. With this one book, a startling shake-up of the old English manor murder mystery, Belton Cobb won me over. So impressive is this second novel of his I broke my rule of splurging on new books by obscure writers and purchased three more Cobb mysteries from UK online dealers and am eagerly awaiting my post-Christmas gifts to arrive in the mail.

The Poisoner's Mistake (1936) is Cobb's second detective novel with his wily police detective Inspector Cheviot Burmann in the lead role. He is called to the home of Rupert Bole on New Year's Day following the sudden death of one of Bole's party guests who was hospitalized for stomach pains. Turns out he was poisoned but just how that poison was administered is only the first of several puzzling incidents in this twisting and deviously told story.

The New Year's Eve dinner is followed by an elaborate game of anagrams and was to end with a traditional midnight toast with "Auld Lang Syne" playing on the gramophone while all guests joined hands around a table singing along. But a sudden fire in the garage adjoining the mansion interrupts the festivities. All the men run out to extinguish the blaze while the women stay indoors and call for the firemen. No one drank any of the cocktails intended for the midnight toast and Mary asks for them all to be cleared away when the fire puts a damper on the party atmosphere. 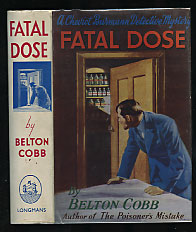 Young Bobby Letchworth complains of stomach pains and a doctor is called to care for him. It appears Bobby is suffering from food poisoning. The doctor orders Bobby to be taken to the hospital to have his stomach pumped. But all efforts are futile. In the morning Letchworth is discovered dead in his hospital bed. The diagnosis is now changed to arsenic poisoning.

The intricately told murder investigation is fascinating but perhaps a tad overly methodical. The events of the party are dissected and examined minutely. Every detail is paid close attention -- from where the cocktail glasses were placed before the fire occurred to who picked them up and where the glasses were later found. The roles of the servants and their activity, usually a routine entry in similar stories of this period, are just as crucial as the main suspects' behavior during the party. For instance, we learn that one cocktail glass was broken from the set of ten that was intended for use at the midnight toast. One of the maids secretly substituted another glass from a cheaper set and did her best to make sure her finicky and temperamental boss Mr. Bole did not receive the odd glass. But of course things do not work out as she planned. That odd glass also was placed in a ring of books arranged to hide the anagram answers and supposedly was not touched for the entire evening. But somehow it ended up across the room hidden in a recess by the fireplace. Who moved it? Was that the glass that contained the poison? If so, it must have been Rupert Bole who was the intended victim posits Inspector Burmann. And so an elaborate plan is laid out that will both protect Rupert from a poisoner who is most likely hiding among the members of his household and flush out Bobby's murderer.

The book is not only dazzling in its presentation of the minutiae of the night of the poisoning but lays out several clues cleverly hidden in seemingly mundane snippets of dialog. The motive for the crime is mentioned in an odd exchange between two characters, for example, that is so jarring I knew it had to have something to do with the crime. In the final chapter in which Burmann explains all there are footnotes with page numbers directing the reader back to these cleverly planted hints recalling Mrs. Bradley's Notebook Pages in the addenda of Gladys Mitchell's early novels as well as C. Daly King's "Clue Finder" at the end of his Obelist books. 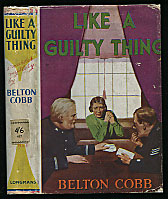 I find it very difficult to come up with "Best of the Year" lists.  Were I to make up my own list of exciting discoveries and the best books among my vintage crime reading this year I think that I would place The Poisoners' Mistake at the top of the list. The structure of the story is an enviable display of misdirection that almost outdoes the overall narrative of Rebecca. There is a sardonic humor on display and the plot is constantly shifting with neat twists and surprises. When the titular fatal error of the culprit was pointed out and the villain was unmasked I was more than satisfied and should have seen it all along.

This is an impressive work by a little known writer who somehow fell though the cracks. Of his more than forty detective novels and thrillers published in England only two were published in the US during his lifetime and few received paperback reprints in his own country. But copies of his books are out there in the used book market and (for now) remain very affordable.  Though Cobb had a long career in crime fiction lasting well into the early 1970s it is his early work from the 1930s through the mid 1940s that is worth your attention and The Poisoner's Mistake certainly serves as solid proof.
Posted by J F Norris at 6:00 AM