The Shadow on the Glass - Charles J Dutton 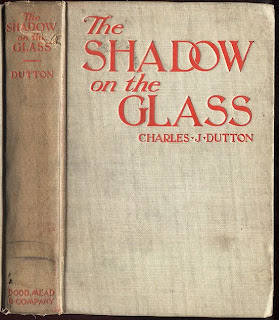 This is the third book featuring John Bartley as detective and narrated by a Watson character named Pelt (no first name) who makes Captain Arthur Hastings look like a candidate for Mensa. The story is slight and seems to have been written with Carolyn Wells' The Technique of the Mystery Story within easy reach. Filled with reiterative "tabulation scenes" the book could easily have been of novella length had all those portions been omitted making the story streamlined and the action unimpeded.

On the eve of his daughter's wedding Frank Rich, a millionaire book collector is found battered to death in his locked library, accessible only by private elevator and that elevator is guarded by two private detectives hired to watch over the wedding gifts. In addition to the murder it is discovered that a valuable rare book of Italian sonnets worth $30,000 and a box containing $5000 in gold coins (one of the many wedding gifts) are both missing. Donald Maxon, a spiteful cousin, who disapproved of the wedding goes missing the next day and is thought to have drowned in the ocean. For some reason the bulk of the novel is spent looking for this supposedly drowned character rather than trying to find out who killed Rich. Numerous "tabulation scenes," (a Dutton staple) an unnecessary inquest scene, and other extraneous action set pieces were surely inserted for the pulp magazine audience but serve only as padding and do not propel the story forward.

To be honest nothing much really happens in this very slight story except the endless repetition of the events of the crimes and the continual pronouncements of how puzzling it all is. The detection is negligible. Every three chapters something missing will be found in an obvious place. The "drowned" man turns out to be very much alive though this too is hardly surprising. Even with its tantalizing locked room problem the mystery is sadly routine with familiar tropes and more than a handful of "hackneyed devices." The only interesting piece comes at the end when the locked room is finally explained. But it turns out to be a faked locked room -- a definite anticlimax.

I have read several of Dutton's books but mostly those with his second detective, Harley Manners, in the lead. Manners is younger and more of an action hero than John Bartley who belongs to the old scientific detection school. This is pretty thin stuff even for Dutton whose early work first appeared in serial format in the pages of pulp magazines like Detective Story Magazine and Star Novels Magazine. Elsewhere on the internet I have written up plot summaries of some much better books by Dutton and talked about why I think he is worth reading for his insights into the early form of criminal profiling used in hunting down a multiple murderer. But I have yet to read one of his books that does not suffer from the reiteration scenes so necessary to the serial format with all those variations on how to convey "our story thus far." Sad to say that this is perhaps Dutton's poorest effort.
Posted by J F Norris at 9:24 PM