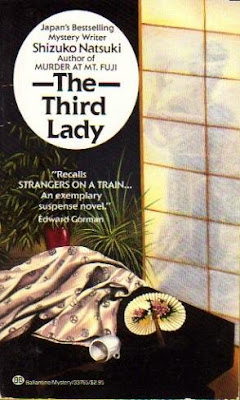 The paperback cover of this excellent crime novel from the "Agatha Christie of Japan" proclaims that it "recalls Stranger on a Train." That quote comes from none other than Edward Gorman, who goes by a less formal moniker these days. And while there is a slight similarity to Highsmith's novel in this very different murder by proxy tale I would say that if you were going to look for a better analogy in the Hitchcock vein it would be in the obsessive romance of the private eye in Vertigo. For in the end The Third Lady is not so much a thrilling suspense novel about murder as revenge, but rather a subtle and haunting study of the illusions of love and the folly of pursuing the fantasy of an ideal lover.

Kohei Daigo is waiting in a salon of a Parisian hotel when he is drawn to a woman. He does not see her face but hears only her hypnotically entrancing voice. He is also intoxicated by her unique perfume. They have an enigmatic conversational exchange and suddenly the lights go out throughout the entire hotel. The two are told by a passing hotel employee to remain in the room until the lights can be turned back on. And so Daigo talks with the strange woman who reveals that she is longing to revenge herself on an evil woman she knows to have murdered a dear friend.

Daigo finds himself ever more attracted to the woman – the darkness of the room, her voice and her sincerity all allow him to become far too intimate all too quickly. He also confesses to know an evil man– a professor in a chemical research lab who inadvertently used a poisonous ingredient in the manufacture of a popular brand of cookie then covered up the mistake with forged documents released to authorities. The ingredient caused cancer in several hundred children and their families. Many of the children died. Daigo admits that he would like to murder the man. The woman tells him her name and a few details about her work as a translator and after a brief moment of shared intimacy makes a quick exit. He has never seen her face throughout their brief meeting, but he is certain he has fallen deeply in love with her. What he does not realize is that he has also created a fatal bond between them that will lead to murder.

A few days later the professor is found dead in his home. He has been poisoned and a mysterious woman was seen in the vicinity of the dead man's' house. Several clues and coincidences eventually lead Daigo to believe that Fumiko, the woman he met in the hotel, is most likely responsible for the man's death. He starts to receive strange phone messages from a woman, a post card from a hotel is sent to his house and it dawns on him that all these things are related to the "evil woman" alluded to in Fumiko's conversation with him weeks ago at the hotel. Is he to track down the woman and kill her as well? He is devoted to Fumiko and vows to prove his love for her by doing just that. His life becomes increasingly complex as he adopts a variety of assumed identities, tells exaggerated lies to gather information about his intended victim, and stalks her like a predatory animal. Simultaneously he tries to locate Fumiko using clever detective work and an arsenal of alter egos.

The novel is mostly told from the point of view of Kohei Daigo. An alternating narrative is added by the halfway mark when the reader is allowed to follow a police investigation by two teams of detectives from two different cities. They begin to make amazing connections between the poisoning of the professor and a crime in the past. Slowly the police begin to suspect a conspiracy involving murder by proxy and are soon hot on the trail of Kohei Daigo.

It is not often that a crime novel packs so powerful a punch as this one does. The finale includes a gasp inducing twist that is poignant, sorrowful, and tragically inevitable. In the end this story of a frenzied obsessive love based on the slightest of contact but mostly the tortured imaginings of Daigo becomes a tale of remorse and shame that is deeply tied to the cultural mores of Japan. It is hard to imagine that this could have been written by a Westerner and turn out as believable and as moving as it is told here. If you have never read a Japanese crime novel here is the quintessential work. Cleverly plotted, imaginatively realized, beguiling and intriguing on so many levels The Third Lady transcends the genre to reveal the complexities of not only Japanese culture and Japanese philosophy but the intoxicating and mysterious power of love.
Posted by J F Norris at 12:45 AM