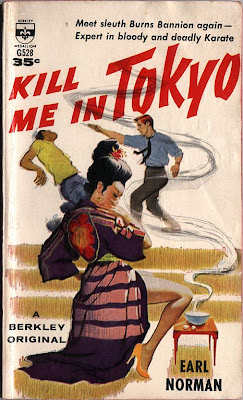 By the time I finished Earl Norman's Kill Me in Tokyo I realized I had inadvertently chosen one of the many books mentioned in Bill Pronzini's two volume homage to the "alternative classic mystery." As I was reading I had an inkling that I was going to have a lot of fun pulling out examples of ridiculous Michael Avallone style prose and Richard Prather-like quirky humor. By the final page I thought to myself, "Bill must have used this book in one of his Gun in Cheek books." I grabbed both off my shelf and flipped through the index of each one. There he was: "Norman, Earl" with two page citations in the second volume, Son of Gun in Cheek. But, believe me, Norman deserves an entire chapter for this book alone.

Burns Bannion is slumming his way through life on the GI bill and cleverly managed to get a student visa by claiming he was going to study at Shopia University. It was a con. He does become a student, but it's not books he's cracking. It's his knuckles and the cartilage in his hands and feet. He becomes a student of Professor Mizutani, the local karate master. The incorporation of karate into the plot is what makes these somewhat noteworthy among the private eye paperback originals of the time. Aside from judo which was popular in many pulp stories and novels in the 1920s and 1930s they are the first fictional treatments of a character using a martial art in the context of a crime novel.

But that term "crime novel" is really a misnomer. This is really a travelogue and sexcapade book disguised as a private eye novel. Bannion isn't a real private eye at all. He's mistaken for one by his first client, the drunken American businessman Charles Echardt, who is pining for his missing love. In one of the few clever lines the drunk admits why he knows that Bannion is a private eye. "You look just like this guy with the short white hair and the broken nose that kids around in L.A." A reference no doubt to Shell Scott. That made me smile.

Echardt wants Bannion to find his missing girlfriend known only by her first name, Mitsuko. A wad of Japanese yen the equivalent of US$270 helps Bannion to decide very fast.  After he buys the most important item any private eye needs - a trench coat - he starts on his search for Mitsuko. The alternative title for this book might very well be Too Many Mitsukos for not only is Mitsuko the equivalent in Japan to the ubiquitous Mary or Susan of 1950s America it is the name of nearly every woman Bannion meets throughout the course of the lusty, soft core porn episodes that litter the pages. Stripper, waitress, prostitute, shop girl - they all seem to be named Mitsuko. A last name or even a decent photo would be extremely helpful. Bannion doesn't get either.

Bannion's first interview is with Echardt who he believes will give better info when he is sober. So he visits his client the following day at his hotel. There he finds the man dead. His neck has been broken and Bannion recognizes the bruises as the work of someone far more adept at karate than he is. Now he has a murderer to contend with. Bannion's investigations, however loosely you might term them, however are interrupted by his unrestrained libido. 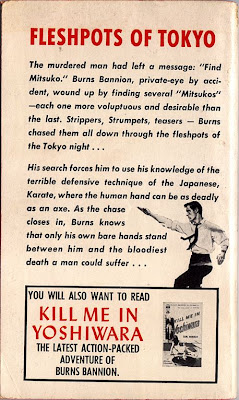 In the course of the story Bannion finds time to jump into bed or slide across a tatami mat or cavort in a hot spring bath with three of the four Mitsukos he meets. He also has a few bedroom tangles with a stripper he dubs Princess Jade (who turns out to be yet another Mitsuko) while at the same time avidly chasing after and trying to undress a department store worker named (thankfully) Sachiko. There's lots of sex. It seems to be the primary reason the book exists. The rear cover helps promote this with the lurid headline FLESHPOTS OF TOKYO. The crime story that occurs seems almost an afterthought. Bannion stumbles upon a smuggling operation and accidentally witnesses a heist from a sabotaged airplane. It's all chance and coincidence and secondary to the pursuit of women and the explicitly detailed karate fights.

Almost as much space is devoted to describing the history and techniques of karate as the description of the nubile female bodies that populate the book. The reader learns that karate came from China and was invented by a group of radical monks who were planning to lead a revolt against the emperor. As their weapons had been confiscated by the Chinese army they devised a way to fight without weapons turning their hands and feet into lethal weapons. They were later forced out of the country and fled to Okinawa where karate flourished and became mistakenly thought of as a Japanese martial art. Bannion also talks about his own painful study of karate. Professor Mizutani inspects Bannion's hands and smiles as he notes the bruises. He tells his student that soon the normal flexibility of the cartilage will harden over time making it easier for him to deliver deadly blows and chop boards in two. Like they say: No pain, no gain.

Kill Me in Tokyo is perhaps worth a cursory reading of select passages for Norman's views of post-WW2 era Japan as seen through the eyes of an ex-GI. There are numerous sections written with skill and care (Norman can write well when he wants to) that describe aspects of Japanese life and culture. This is what kept me involved. Not the sex and certainly not the haphazardly constructed crime story. The scenes in the geisha houses, a section about samisen musicians, the detailed preparation of a Japanese delicacy called sazae, the way the train stations operate with officiousness and meticulous precision, all of this made for interesting and sometimes enlightening reading.

On the other hand, there are the encounters with a group of transvestite prostitutes that Bannion cruelly calls "herms." This I am guessing is short for hermaphrodites. When talking about them he uses the pronoun it and often refers to the less attractive "herms" as beasts. Had he been as careful as he was in his talk of other aspects of Japanese culture I might have been more forgiving.  He might, for example, made an observation about the Asian fascination with men dressed as women or the influence of kabuki in the dressing and make-up of these characters. But Norman in the persona of Bannion only wants to use them for the "freak factor" and as objects of revulsion earning him a place in the Pretty Sinister Hall of Infamy -- a place I reserve for, among other things, the long list of crime writers who scribble callously and without compassion about the marginalized LGBT community so often dismissed as deviants. The transvestites, by the way, will play an instrumental part in helping Bannion find the killer in the "shocking" finale. But by the time I had arrived there I no longer cared who the karate chopping killer was.

I also have Norman's second book in the series Kill Me in Shimbashi, but I cannot see myself rushing to find out if Burns Bannion ever improves (or even develops) his detective skills or how many more Japanese women he can screw in unusual places. The books that come later in the series are fairly scarce and, of course, are priced exorbitantly in the paperback collector market. They may have attractive artwork on the outside but I wouldn't spend more than five bucks on any of them for what is between the covers. For those of you who need to know below is the complete list of the Burns Bannion "private eye" books. All were published by Berkeley Medallion. The first three remarkably had two separate editions. So they must have been popular with some audience at the time of their original publication. 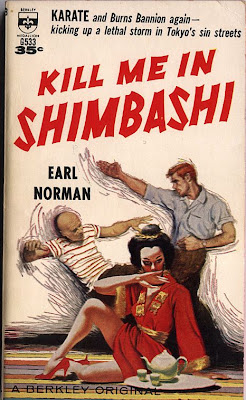 Four years later two more were published (along with reissues of the previous five books) by an English language publisher based in Japan. They were not released in the US. These two are almost impossible to find unless you have a source in Japan or are willing to pay between $60 to $140 for a collectible paperback.