Originally published in England in 1922. The US edition was published in 1936 no doubt with intent to capitalize on the monster movie mania of the early 1930s. 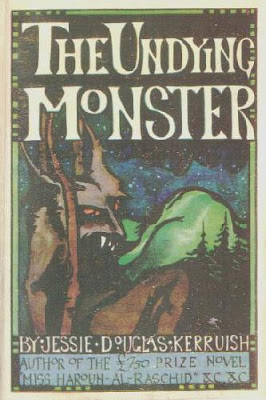 Utterly fascinating from start to finish. Perhaps the best of the earliest attempts at combining a detective novel with a genuinely supernatural mystery. Most supernatural detective novels start with a bizarre murder that seems to have no earthly explanation, but this one starts with a curse that is firmly believed in and accepted by the family members. Features Luna Bartendale (the literature's first female occult detective) who puts John Silence, Carnacki and Miles Pennoyer to shame with her extensive knowledge of occult rites and practices and beats them all with her "super-sensitive" gift of being able to psychically connect with troubled souls and hypnotize them. She is far more colorful and interesting than Jules De Grandin who required Dr. Trowbridge's ignorance as a foil.

There are all kinds of amazing set pieces – the descent into the Hammand mansion cellars that house a 16th century alchemist's workroom, the discovery of the gruesome Hand of Glory buried in the wall, Luna's use of a divining rod to help her distinguish between benign and malevolent forces. In addition to all the supernatural lore and techniques, Luna is an excellent physical evidence detective. Her discovery and subsequent withholding of crucial evidence leads her to the identity of the murderer very early.

So much of this book served as the basis for the numerous werewolf stories that followed throughout the 30s and 40s. Most notably the doggerel curse used as a frontispiece in the US edition seems to have inspired that other well known rhyming curse that crops up in all the Universal werewolf movies ("Even a man who is pure in heart/And says his prayers at night..."). 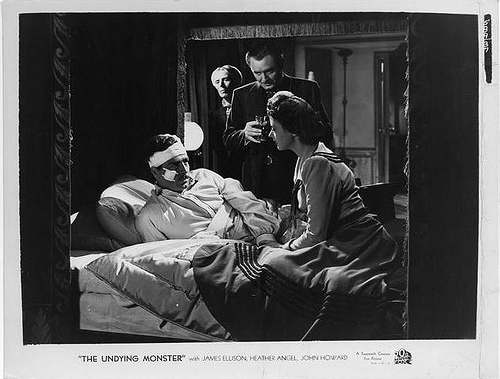 A movie version made nearly a decade after this was published in the US dispenses with Luna and instead gives us a CSI type doctor, circa 1940s, as the central detective figure. Swanhild is renamed Helga (thankfully!) but is no longer a believer in the supernatural and instead scoffs at all the legends and curses hanging over the family. Oliver is still a twit but toned down a bit. The story also eliminates all the Norse legends and the hypnosis. It's beautifully filmed and atmospherically designed. The sets inside the home and the exteriors of the moors are some of the best in a Hollywood monster movie. But the movie fails to thrill. It could've been far more interesting and original and might have been a real cult classic had it stuck to Kerruish's original story.
Posted by J F Norris at 9:40 AM