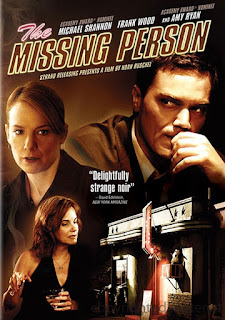 It was bound to be written. A private eye story that uses the events of 9/11 as a backdrop. The Missing Person is story that begins as yet another clever riff on the standard private eye story and slowly unfurls into a multiply layered tale of identity, loss, redemption and second chances. I was completely taken aback by how subtly profound this movie turned out.

John Rosow (commandingly portrayed by Michael Shannon) is an ex-cop who fled New York for personal reasons. He's living in squalor, adding whiskey in his morning coffee, and eking out a miserable living as a private investigator in Chicago. He's a sad sack who covers up his depression and troubles with the private eye's favorite defense mechanism - wise cracks. A mysterious lawyer, Drexler Hewitt, hires him to follow a man headed for Los Angeles on the California Zephyr, Amtrak's express train from Chicago to L.A.

The first half of the movie is more of a road trip flick than a private eye movie. We get to meet a variety of colorful characters from the surly waiter on the train to a barfly with a hidden agenda (Margaret Colin) to a motley crew of taxi cab drivers. One cabbie in particular, Hero Furillo (a very funny John Ventimiglia) has one of the most memorable scenes in the movie. In trying to find out where Furillo is taking his passenger (Rosow's target man) the two of them discuss being New Yorkers, their old neighborhood of Hell's Kitchen, and the real life cop Serpico who inspired the book and movie that sport his name. This New York bond with Furillo helps Rosow more than he expected. Having broken the ice he persuades (with a bit of cash) to let Furillo stow him in the cab's trunk and let him out when he arrives at his fare's final destination.

It turns out to be a remote farmhouse over the Mexican border. He's caught spying on his tail, is beaten and dragged to the farmhouse owner, Don Edgar (Yul Vazquez). There he is told that the man he is following, Harold Fullmer, is affiliated with an orphanage on the grounds.  Don Edgar stresses that Harold is saving children from their hellish lives and brought to Mexico to the orphanage where there are given clean clothes, food, shelter and educated in Catholic schools. Rosow finds it all a little hard to swallow, but gives in, and is allowed to leave relatively unharmed.

He reports all of this to his employer Drexler Hewitt and Hewitt's associate Miss Charley. Hewitt then has to let slip some information. Harold is wanted by his wife back in New York City. Rosow's job is to pick up Harold's trail again, find him and convince him to return to New York to his wife or take him back forcibly.

After a few more adventures Rosow finds Harold who reveals he is a survivor of the 9/11 disaster. A few other secrets get aired as well. It is here that the story takes on a new dimension with Rosow's new job of taking Harold home to see his long abandoned wife. He must convince Harold to live up to his responsibility as a husband, to give up his new found freedom even if it means sacrificing a life that finally gave him purpose.

There's a lot going on in the story at this point. The movie ceases to be just another homage to noir classics and private eyes of days gone by. There's a poignancy that slowly rises to the surface. Rosow's hard edge gives way to a tender side, and we start to see the reason for his despondency. It links him to Harold in a way that shocks him.

In my estimation, here lies the true beginning of the real story of The Missing Person. Rosow, we already know, is haunted by a someone from his past. He dreams of a woman constantly. The dreams he has are vividly colorful and underscored by romantic soft jazz music. It's quite a contrast to the rest of the film which has a murky drab palette in wardrobe, setting, and lighting all accompanied by a soundtrack dominated by wailing saxophones. Rosow and Harold will discover they have quite a bit in common as the film progresses towards its satisfying, somewhat surprising ending.

The﻿ Missing Person
Written & Directed by Noah Buschel
starring Michael Shannon, Amy Ryan, Frank Wood, Linda Emond, Paul Sparks, Margaret Colin, John Ventimiglia, Yul Vazquez, and others.
The movie is available on DVD from the usual movie outlets on the internet, Netflix, and hopefully your local video store.  It's highly recommended for a very different take on the private eye in film.
Posted by J F Norris at 1:37 PM