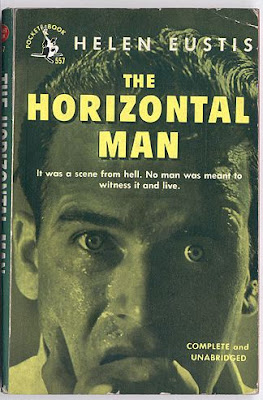 There is a mystery attached to The Horizontal Man far and above the mystery in the book. Sophisticated and well read devotees of crime fiction will catch on to the twist fairly early on. It doesn't help much that Reader's Digest, in their "Best Mysteries of All Time" uniform reissue library, includes a little pamphlet that ties the book to a well known work by Robert Louis Stevenson. But even for those can't see through the obvious the surprise is telegraphed at least four different times before the true denouement. At the end of Chapter 26, for example, the surprise is given away in a melodramatic confrontation between two of the main suspects. The culprit will be officially unmasked eight chapters later in a prescient scene that foreshadows the remarkably similar ending of a classic thriller whose author and title I dare not mention.

The mystery then is why a book so clumsily plotted with a tendency towards overwrought writing won the Edgar Award for "Best First Mystery" and continues to make "Best Mystery" lists over and over. I offer up a couple of ideas. Although Eustis has a heavy hand at metaphor and lays on the poetic prose a little thick, however much she tries to conceal the ace up her sleeve while letting it fall several times throughout the story, her debut novel is noteworthy for its exploration into the realm of dark psychology. It should be recognized as a landmark suspense thriller for its time.

Only Dorothy B. Hughes and Margaret Millar, two similar writers, had entered the terror territory earlier than Eustis' 1946 debut. Hughes created quite a few horrifying psychopaths in her books. Millar was expert at unveiling the terrors hidden in a superficially mundane life.  Eustis takes both those aspects of the psychological crime novel and then adds her own personal ingredients in this story of the aftermath of a crime passionnel. There is an abundance of melodrama and numerous characters who easily might be at home in a Grand Guignol piece.

I suspect that this book is probably the first instance in crime fiction of employing a now overused, nearly cliche writer's trick. In the hands of more clever and polished writers that trick has fooled many a reader. One book in particular, though, has in effect stolen Eustis' thunder and overshadowed her early effort. But it should be pointed out the book I am cryptically referencing came fifteen years after The Horizontal Man was originally published. 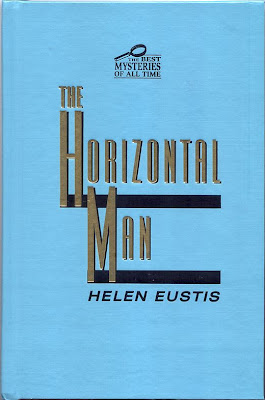 The story is set in a women's college in Connecticut and the victim is Kevin Boyle, English professor, poet and a self-professed sexual Lothario on campus. He is found in his apartment bludgeoned with a fireplace poker and left to die in front of his still blazing fireplace. The immediate suspect is Molly Morrison, a deeply troubled, half mad, freshman whose puppy love crush on the teacher sent her over the deep end into a crazed obsession. When she learns of his death she completely falls apart and is sent to the college infirmary where she spends the bulk of the book ruminating over the emotional baggage of her screwed up family life, dwelling on her behavior that she believes led to Boyle's death, and ultimately undergoing analysis at the hands of Dr. Julian Forstmann, a psychiatrist brought in by the college president. She is only one of many pathetic portraits.

The cast includes Leonard Marks, college librarian and Boyle's confidante. He's painted as your typical Casper Milquetoast, an ineffectual loner "with no personality" who craves friends and friendship, but is clueless as to how to interact with anyone. He gets the worst treatment of any of the characters in the book. You can't help but feel sorry for the poor sap. I was rooting for him to get even with someone, but he's truly a pathetic case. When he writes poetry that attempts to express his passionate feelings it only sounds ridiculously anachronistic, like something from the 18th century. As the story progresses there are hints that he may have been sexually attracted to Boyle.

There's also George Hungerford, the Shakespeare professor, who on the surface appears to be just another crusty dig of an academic, but who the reader discovers is longing for death. His failed suicide still haunts him. His "nervous breakdown," so euphemistically mentioned throughout the story, is like the albatross hanging from the Ancient Mariner's neck. He needs sleeping pills to relieve his tortured anxiety and dreams of alternate methods of suicide that will end successfully.

The women do not escape Eustis' cruel writer's paintbrush either. Freda Cramm (there's a perfect name for a hateful character) is a two-faced temptress. The original 1940s audience would probably call her Jezebel. A modern reader would call her a cock tease. Others still might simply apply that catch all insult – bitch. She comes across as a hypocritical, self-absorbed, disingenuous woman remembered as a lazy student by the senior faculty. One of the older women at the college recalls that Cramm pursued the male staff as often as a student as she does now that she's on faculty herself. She and Marks have a war of the wills each seeing the other as an enemy. Cramm is wily and devious in the way she plays with Marks' trust and emotions, but Marks when he finally recognizes Cramm for what she is goes so far as to call her evil.

The book is told in the omniscient voice allowing Eustis to reveal each character's personal thoughts. It makes for an uncomfortable, practically claustrophobic, atmosphere as each chapter shows these people to be selfish, secretive, lonely, disturbed, haunted and tortured. There doesn't seem to be one, well-balanced,  trouble free soul on campus. With such extreme emotions at play they seem to have no other recourse than to act in the most extreme manner. Spying on one another, breaking into apartments, taunting and insulting each other with relish. Can there be no relief?

Thankfully, there are two characters who breathe a little fresh air into the proceedings. Kate Innes, a tomboyish intelligent student, and Jack Donnelly, a young tabloid reporter, meet, hit it off and turn amateur sleuths. Donnelly is the only character in the book who treats sad sack Leonard Marks with any decency. Innes seems to be the only female character in the book with common sense. She is willing to go out on a limb and try to save the reputation of Molly Morrison, reviled and ridiculed by the rest of her fellow students. Together Kate and Jack (with the college president's approval, of course) are allowed to interrogate the staff and student body in order to find something that will give Molly an alibi, saving her from jail and further humiliation, as she attempts to recover her mental health and well being.

While working together closely Kate and Jack develop an interest in each other. Their banter makes for a kind of Beatrice and Benedict love/hate relationship that is the only trace of humor is a book so dark it might as well be called an ebony suspense thriller. That they succeed in helping save Molly Morrison is a bright spot in the story for which the reader is truly grateful. 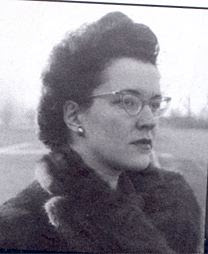 Why a crime plot set in the academic world with hardly one redeemable character in the story? I'd expect something of this nature to be a satire, but it's not the route Eustis chose. Reading the book made me squirm and raise my eyebrows more than a couple of times. Apart from the surprise revelation of the killer's identity I couldn’t see why all the characters had to be such messes - especially for a book written in the 1940s. I did a little research and came up with a bit of biographical information on Eustis that reveals all.


Eustis' first husband, Albert Fisher, was a philandering English professor and sometime poet just like the fictional Kevin Boyle. According to the autobiography of Daniel Aaron, a professor at Smith College and founder of American Studies, Fisher was known to "have charmed a number of Smith women into his bed." A valid point has been raised that The Horizontal Man is Eustis' savage revenge on her adulterous first husband's extramarital exploits. Perhaps this is why the book tends to be blacker than a moonless night.
*  *  *
Patti Abbot is taking a break this week.  For the rest of Friday's Forgotten Books please go to our guest host's blog Todd Mason's Sweet Freedom.﻿
Posted by J F Norris at 6:00 AM