Faces in the Dark - Boileau & Narcejac 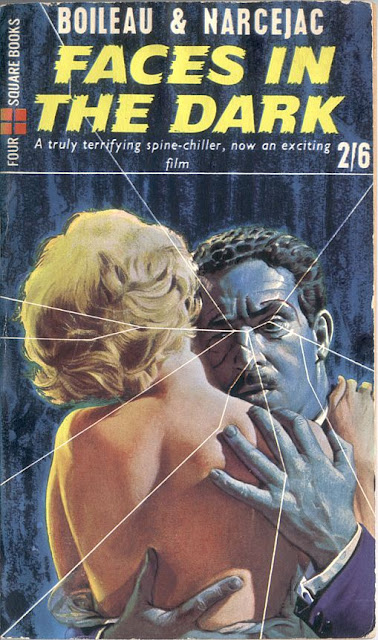 For decades it seems (only about eleven years though) I have been trying to get a hold of the extremely scarce novels of Pierre Boileau and Thomas Narcejac. Only a handful of them have been translated into English and although they were published in mass market paperbacks in the 1950s and 1960s finding an affordable copy these days is like trying to locate the Holy Grail. I was thunderstruck when I found not one, not two, but three all at once hidden in a glass enclosed cabinet in one of my favorite bookstores here in Chicago. I had to ask special permission from the curmudgeon of an owner to open the cabinet so that I could see them and check out what I thought would be the astronomical prices he was charging for them. Considering their condition I thought the prices (amazingly lower than what I expected) were not only fair, but practically a steal. I took them all. And in the coming weeks I will be reviewing all three. Here is the first in the series.

Knowledgeable readers of crime fiction may know why I was so eager to read these books. Boileau and Narcejac are the authors of two novels which have been immortalized on screen as two iconic crime movies. The first novel Celle qui n'était plus became the hauntingly original thriller Les Diaboliques. The other book, D'entre les morts(translated as The Living and the Dead in the English book version), became Hitchcock's classic tale of murder and obsessive love Vertigo. I was hopeful that the first book I selected - in fact the second the two men wrote together - would be just as chilling and twisty as those two films I count as two of my favorites in the cinema of crime.

The first paragraph promised much. A man is struggling with his first book in Braille and gives up in utter frustration. He explodes in a fit of uncontrolled temper practically destroying his bedroom in the process. He is Richard Hermantier, a inventor and owner of a lamp manufacturing company, who is recovering from a freak accident involving a hand grenade left undiscovered from WW2 that he accidentally exploded while doing yardwork. (The book takes place in 1948.) The accident left him blinded and he is being helped slowly back into the real world by his wife, Christiane, and his business partner, Hubert. Richard is visited by a friend Bleche just prior to a convalescent stay at his villa in Vendee where the accident took place. Their discussion provides us with all the background on the accident and Hermantier's past life. Prior to leaving for Vendee, however, strange events are already taking place in the Hermantier household.

Christiane has let go their long time servant Blanche and hired a younger girl named Marceline. Clement, the family chauffeur, has become surly and disrespectful. Richard suspects that he and Marceline have become lovers and care more for each other than they do their employer. Richard also has become less of a commanding presence in his own household now that he has lost his sight and finds that the servants are patronizing to him, that they reluctantly take his orders deferring instead to his wife who apparently has taken control of everything. Left only with his remaining senses of smell, hearing and touch his perceptions are governed more by his imagination than reality. The loss of his sight has trapped him in a world of his own paranoid imaginings. Or are they something more sinister?

A true businessman whose life was his work Richard feels useless and impotent not being back at work. Christiane undermines his every attempt to gain control of his company and return to work. Hubert also seems to be a threat - even a menace - to Richard's plans to get a new-fangled lamp into production at his plant. Left alone in his bedroom he hears rustling and thinks that someone is in the room with him. The authors do an impressive job of conveying the terror Richard is experiencing.

When his black sheep brother Maxime shows up unexpectedly for a visit the story shifts gears. Maxime is something of a libertine.  He borrows money that he never repays, drinks to excess and seduces women with abandon. Marceline becomes his latest conquest leading to domestic complications in the Hermantier household. Maxime is also suffering from a respiratory ailment due to his smoking habit and his indulgent lifestyle. When he disappears in the night without a word Richard's imagination kicks into high gear and the book finally becomes the terror filled story it promised at the start. Two of the best scenes are when Richard is alone in his bedroom yet he is certain someone is there watching him and, towards the end of the book, in a graveyard using only his fingertips as his guide Richard discovers something horrifying.

And yet in the end it's all too familiar. Everything that follows Maxime's disappearance can be guessed at by any well read devotee of crime fiction. Even the requisite final twist in the the last pages fails to deliver the kind of gasp that one would expect from the creators of something as powerful as Les Diaboliques. I am hoping for something better in the other books I have yet to read.  Stay tuned for more on Boileau and Narcejac later this summer.
Posted by J F Norris at 7:00 AM