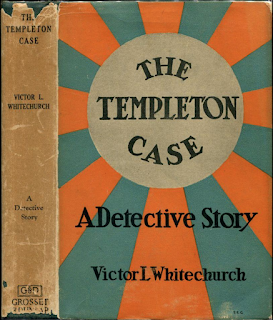 Victor Whitechurch is best known for his short story collection Thrilling Stories of the Railway with his vegetarian detective Thorpe Hazell and for being one of the founding members of the Detection Club.  He wrote a mere five detective novels and one comic crime novel (which is not very funny at all) as well as penning the first chapter of the seminal round robin detective novel The Floating Admiral.  I was thinking a lot about that round robin novel while reading The Templeton Case (1924), his first foray into detective fiction. Reginald Templeton is found stabbed in his yacht while moored off the coast of Marsh Quay, a tiny village situated near an estuary. Sailing and boating feature prominently in the story and there are myriad suspects who were in and around the yacht before and after the murder.  Several intriguing puzzles surrounding the murder crop up leading to some excellent examples of early 20th century detection in a murder mystery.

Our persistent and clever detective is Det-Sgt. Colson ably assisted by a lawyer and inadvertent detective of sorts in the person of Canon Fittleworth.  To be truthful the Canon is an accidental obstructor of justice because he finds and pockets a distinctive cigar label rather than handing it over to the police.  For a while I thought perhaps Whitechurch meant us to think this absentminded member of the clergy was involved in a cover-up. Whitechurch, being a canon himself, would never stoop to such a sacrilege. Eventually the Canon hands over the cigar label at the inquest which leads to an intriguing sort of shell game that I immediately picked up on though I was incorrect in my assuming who did the switcheroo.

I also liked many of the supporting characters including Mrs Yayes, the owner of the local pub; a young mystery man who claims to be a painter and seems very suspicious; a handful of hired boating men; and Colson's very perceptive and imaginative wife with whom he discusses the case. She gives her husband several ideas about the murder mystery. Unfortunately towards the end of the book we meet an ugly portrayal of a Jewish man and the book descends into the typical kind of "Jew talk" that pollutes so much of early 20th century British fiction. It didn't ruin the book for me but I can imagine it would make for a "skipping it" deal-breaker for lots of readers these days.

In addition to the puzzle of the cigar label there is a clever bit of code breaking of sorts when Colson and his crew discover a blotting pad with a string of words missing some letters. We are courteously given that string of letterless words in the text and can return to it repeatedly as the story unfolds.  Colson's lawyer friend keen on puzzle solving mulls it over and using a combination of intuition, logic, and a lot of luck remarkably comes up with the actual sentence and identifies the name of a key player in the mystery.

Templeton was an explorer and his past life in South Africa coupled with the discovery of a single raw diamond on the yacht will lead Colson to a dark motive and a web of past criminal activity.  I thought the reveal of the murderer was a delightful surprise.  Never saw it coming and it seems to be something of an original rule breaking coup. I've never encountered this twist in any detective novel I've read to date.  So hats off to Canon Whitechurch for this clever and engaging debut.

THINGS I LEARNED:  The geography was so specific in describing an estuary that Templeton's man navigated that I thought perhaps all the towns mentioned were real.  They weren't.  But I looked up those I knew were real and followed the course of the yacht as described by Whitechurch.  It lead me to the small town of Dell Quay not far form Chichester which just happens to have a famous cathedral.  I think that this is exactly the area that Whitechurch set his story. It certainly fits in with all the descriptions and definitely follows the sailing route of Templeton's hired yacht, Firefly. 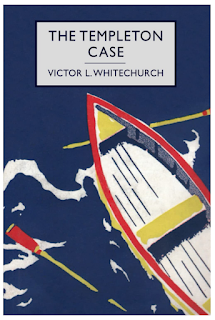 As this is out of copyright I was planning to reprint The Templeton Case but someone beat me to it earlier this year.  I guess that's from whom I bought my truly cheap copy of the US first edition a few months ago.  The Templeton Case is now available in paperback and digital format from an outfit called Spitfire Publishing.  They sell their books on that giant internet source of nearly everything under the sun.  If intrigued by this review you can get a cheap eBook or modestly priced paperback.  Despite the depiction of the Jewish man at the end I thought this was rather good.  Even Jacques Barzun in his Catalog of Crime thought it was a notable effort for a first try at writing a detective novel.