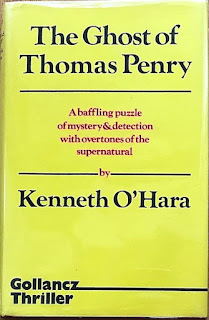 Howard Stavey is tasked with creating a treatment for a TV program the subject of which will be Thomas Penry, a Welsh man known for his research into the occult and psychic phenomenon. If it meets with director and production team approval he may be allowed to write the script.

After meeting with one of the Penry’s sole living acquaintances Howard uncovers some intriguing info on Penry’s wife Madeleine who froze to death with her child one winter decades ago. Her death was always thought to be a tragic accident, but Howard’s research reveals she may have been killed and that the child may not have been Penry’s. Madeleine claimed to have psychic abilities her husband was envious of coupled with the fact that letters reveals she most likely was apparently in love with another man who could be the child’s father. Prime motive that signals Penry killed his wife. This murder mystery angle decides the director that the story is worth filming and he orders the script be written and he starts to gather up a production team.

O'Hara does an excellent job in displaying the conflict between writers, actors, director and crew members. We also get unusual insight into dealing with actor’s egos, especially since they are planning to portray real people. Initially reluctant to do a movie about a man who played with spooks Tom, one of the actors, changes his mind when he starts to believe he has psychic ability. He begins to not only believe in The Ghost of Thomas Penry (1977) but that he is the reincarnation of the man he has been hired to play on film.

Gwenillen, owner of the house and distant relative to Penry, after much dilly dallying finally takes the production crew and actors into the basement and reveals the chapel. It’s vast and apparently untouched since the scandalous ritual that ended with the death of Ruthven Douglas back in the WWI era. Chests contain silver, medieval tapestries and ritual wardrobe. Ros who has an eye for lavish clothing is drawn to the purple and gold cloak. Natalya, the production designer, has a fit. “Don’t touch it!” The fabric is of course fragile and it may fall apart in the hands of the careless actress. Tom & Ros go up to a balcony and fight. An enormous vase comes crashing down barely missing Adrian the director. Is it an accident? Or an angry ghost?

Eliphas, a former professional magician, is the production’s magic and occult consultant. He finally speaks on p. 104 with a lengthy discussion of the house, Penry and the group of amateur psychics who gathered in the underground chapel. Howard replies, “I’d like to believe” in a long monologue. Eliphas laughs then offers his opinion of Penry and the chapel. A disagreement of ceremonial magic follows. Howard says there is no proof. Eliphas points out the care given to the chapel and its contents proves otherwise. Harriet (researcher and co-writer) prefers to come straight to the point. “He tried to summon demons.” But Eliphas says there is no proof of any of that. Penry was too evasive in his diaries and notebooks. He thinks Penry had psychic power and was ashamed of it.

Eliphas tells Howard that Tom had a vision of what the interior of the house looks like just before he entered the building. Tom described to Eliphas in great detail the furniture, the architecture, the layout, and when he enters it is almost exactly what he uttered. Does he have genuine psychic ability? A vase levitates when he mutters some mumbo jumbo near the art object and he is convinced that he has “the gift.” 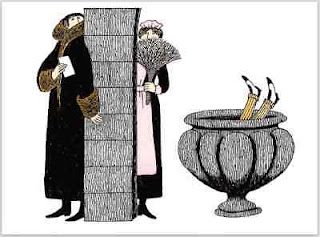 During a second visit to the chapel another vase falls – or is shoved – and someone is killed. Everyone thinks it’s Ros because the corpse is wearing the purple and gold cloak. But when the body is turned over they discover it is someone else.

Joe, the crew's cameraman and electrician, Howard and Harriet piece together all the accidents and chicanery. The trio turn sleuths to find out who among them is a murderer and why. A major clue in the victim's wallet leads Harriet to uncovering the dead person’s true identity and why he got himself hired onto the crew. The ultimate reveal is a gobsmacking surprise and explains all of the serious psychic moments and mysterious phenomenon in the supposedly haunted chapel.

This is a highly recommended read for those like me who can't get enough of detective novels that feature supernatural phenomenon -- be it genuine or faked.  There is plenty to admire here, especially the completely unexpected manner in which all events unfold, the identity of the victims, and the unmasking of a devious killer. The background of a TV film crew is 100% authentic, too.  Read on to learn of the author's real name and various professions.

THE AUTHOR: Margaret Jean Morris (1924 - 1996) began her writing career with the mainstream novel Man and Two Gods (1953).  She also penned a handful of plays and several detective and crime novels using the pseudonym Kenneth O'Hara.  Her first mystery novel, A View to a Death (1958), features Dr. Alun Barry, a director of research at an engineering firm, who accidentally becomes a detective while on a vacation.  She is probably best known under her other pen name, "Jean Morris",  as the author of several juvenile fantasy novels starting with A Path of Dragons (1980).   Her young adult books have been compared favorably to Ursula Le Guin's.  Morris also spent much of her life as a TV scriptwriter and notably wrote episode four ("Anne of Cleves") for the BAFTA and Emmy award-winning series The Six Wives of Henry VIII  shown on both BBC and American TV on PBS in the early 1970s.