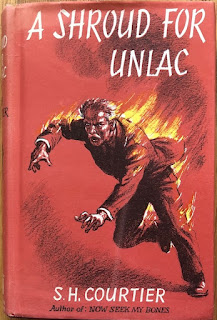 In Courtier's fourth detective novel once again this Australian writer explores an aspect of the culture in the land Down Under.  This time it's sheep ranchers, and specifically sheep ranchers who are involved in selling wool to textile companies.  But as Courtier is also one of the finest practitioners of bizarre crime novels he adds an extra twist that borders on science fiction. A Shroud for Unlac (1958) opens just prior the the opening of a textile exhibition on the grounds of Robert Unlac's vast sheep ranch  A secret area cordoned and fenced off contains his greatest invention, or rather cultivation, that will be unveiled at the exhibition.  Before the exhibit can officially open Unlac dies in a tragic fire that destroys most of this cultivated product and the storage of valuable seeds. Autopsy reveals that Unlac, though burned so dreadfully, actually died of a heart attack.  And oddly his clothing was apparently drenched in gasoline. Was it an accident or diabolically arranged sabotage and murder?  Superintendent Ambrose Mahon is on the scene to uncover a horrible plot and unmask the killer.

So what exactly is this cultivation?  What's going on at Lirra Down Sheep Station that has all the ranchers of merino wool sheep on edge, some truly frightened?  It's the acres and acres of a new cotton hybrid that Unlac has developed.  Fibers of this miracle cotton he calls ininja yield an equally miraculously durable textile impervious to ripping and tearing and nearly all staining. It's no wonder that someone tried to destroy the fields where thousands of the plants were growing behind heavily secured fencing. And no wonder why Unlac was killed. A miracle fabric would not only put sheep wool ranchers out of business but make possible millions for the owner of the plant seeds  and the secret hybridization process.

Courtier in his usual manner weaves a complex plot that involves jealous business men, deep dark family secrets, and a cultural war between aboriginal people and modern Australians interested only in making money. The cast of characters is once again a varied group of Aussies and "abos". I learned a new word (as I always do reading Courtier's books).  Myall is obsolete Australian slang derived from aboriginal languages that means "stranger" or "ignorant person."  Like most local dialects it was appropriated by white men and turned around to a mean "wild" or "uncivilized" or used in a negative connotation as a synonym for any aboriginal person. No matter what meaning the reader chooses for this odd term there is a nearly anonymous man, described only as a myall, who early in the book is found strangled outside the grounds of Lirra Down. This crime almost dismissed by the police (almost forgotten by this reader, as well) has later repercussions as the story unfolds.

The murder of Unlac is presented as something of an impossible crime for it is unknown how the killer managed to get to the odd storage area where the body was found burned to an unrecognizable corpse. Nor is it known how the killer could have escaped such a conflagration. Having read many of Courtier's books I should have known how this would be explained as the solution uses a detective novel convention repeatedly employed in his books even if it is a cliche device. However, in the story's context this cliche is pulled off with ingenuity.  Some diabolical wizardry utilized in the arson recalls John Rhode's gadget-ridden detective novels.

A Shroud for Unlac is fairly scarce these days. Luckily, exactly two copies are available for sale online.  Act now! as they used to say in old 70s American TV commercials. This book comes highly recommended as do most of the mysteries by Sidney H. Courtier, an undeservedly forgotten writer who continually surprises with his originality and invention. A review of one of his best novels -- almost topping The Glass Spear, his incomparable debut mystery novel  -- is coming next week.  It's a retro Golden Age mystery with a corker of an ending worthy of the intricate plotting of the much lauded Crime Queens who flourished in the 30s and 40s.