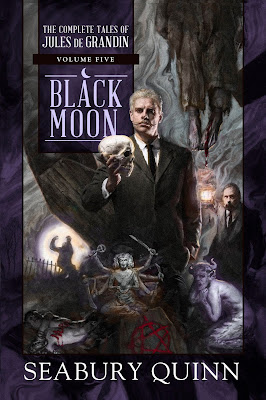 Jules de Grandin may not have been the first occult detective in weird and supernatural fiction but he will always be the original Night Stalker to me.  Around the time that cult TV show Kolchak: The Night Stalker was airing in the 1970s a series of paperback books appeared in my local Woolworth's on the paperback racks I used to regularly pore over. The garishly colorful covers with bizarre creatures and titles like The Horror Chamber of Jules de Grandin and The Hellfire Files of Jules de Grandin were perfect lures for my teenage eyes.  I eagerly bought them all over a period of three or four months that summer.  In them I was introduced to the small but fierce French physician who battled every possible evil creature imaginable and did it all almost entirely in a fictional town in New Jersey.  Of all places - New Jersey!  The only state in the USA that was the butt of jokes of every stand-up comic and episode of Laugh-In during the 1970s.  But from the pen of Seabury Quinn Harrisonville, New Jersey was one of the most terrifying places you would ever want to visit.  A town overrun with vampires, werewolves, reincarnated Egyptian mummies, worshippers of Satan, and myriad evildoers obsessed with immortality and willing to make bargains with any demonic being they could summon and not unwilling to kidnap, steal or murder in the process. Not all the tales took place in New Jersey, but the bulk of the stories that appeared in Weird Tales form 1925 through 1951 did.  I devoured these stories in the six paperback volumes thinking that that was all I could get my hands on.  Now all 92 Jules de Grandin supernatural stories as well as the single novel featuring the occult detective, The Devil's Bride, are available to devotees of pulpy horror in a five volume set. Each volume runs close to 500 pages and there are dozens of tales I'd never heard of or read before. 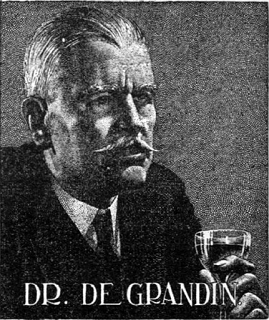 As George Vanderburgh, owner of the indie press Battered Silicon Dispatch and a Sherlockian of some note, and Robert Weinberg, that renowned collector of mystery and supernatural books and Weird Tales maven extraordinaire, remind us in the detail rich introduction to each volume Seabury Quinn is not the most famous of Weird Tales writers.  But Jules de Grandin, his engaging intelligent and extremely knowledgeable occult detective, was definitely one of the most popular characters among the readers of the magazine. From de Grandin's first appearance in "The Horror on the Links" in 1925 the Frenchman known for his frequent bizarre exclamations like "Barbe d'un chameau!" or "Larmes d'un poisson!" was an instant hit.  Readers demanded more stories from Quinn and the publisher. Every year de Grandin tales made the "best of " lists and were frequently reprinted in later issues.  It's not hard to see why for Jules and his physician sidekick Dr. Samuel Trowbridge are truly likeable and heroic in the manner that the best of pulp fiction characters always are. 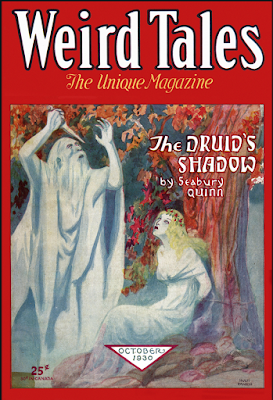 Short in stature, athletic in build, blond, bearded, a speaker of several languages de Grandin is like a mix of Sherlock Holmes, Hercule Poirot and John Silence, all characters he must have been modeled on.  Well, perhaps not so much Poirot for he was only five years old when the first of the de Grandin adventures was published.  But surely Holmes, Silence and perhaps Carnacki, William Hope Hodgson's other well known occult detective might have been Quinn's source as Weinberg and Vanderburgh tell us in their introduction. Letters pored in from readers analyzing the stories, praising and critiquing Quinn's imagination. A cult grew around the character.  As the two men describe the popularity and the phenomenon of de Grandin he began to take on a life and legend similar to Holmes. They write in their intro: "Readers smitten by how believable de Grandin seemed as a character wrote to Weird Tales asked if he was a person in real life."

There is not enough room here to describe all of the stories and I have no way near finished even the first tow volumes. I selected stories that I haven't read at random based merely on length (avoiding those over 25 pages in order to read as many as I could in two weeks) and the oddity of the titles. Vanderburgh and Weinberg's intro also whetted my appetite by pointing out the more grisly and horrific of the stories.  I was drawn mostly to Quinn's fascination with Eastern mythology and religions and his penchant for pitting de Grandin against creatures less well known in the lore of the supernatural. Here is a modest sampling of the strange and fantastic adventures of the French physician turned occult detective. Each tale's first appearance in is in parentheses.

"The Horror on the Links" - The life of the idle rich at a golf country club is no party when an ape-like creature kills a woman and pursues another. Shades of Poe's Rue Morgue and Well's Dr. Moreau meld in a story of revenge and diabolical experiments. (Oct 1925) 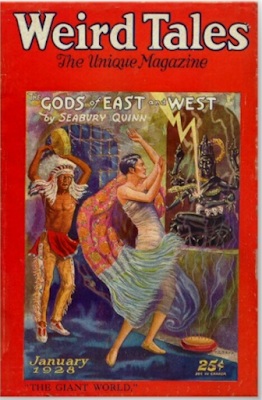 "The Isle of Missing Ships" - More of a pirate adventure than an occult detective story. Shades of Indiana Jones' derring do and Jules Verne set pieces crop up in this story of a self-proclaimed god who calls himself Goonong Besar and rules an island in the South Pacific populated with the usual cannibalistic inhabitants armed with poison arrows. Seemed filled with silent movie cliches from its maze-like underground fortress to the scenes of captives tied to stakes being cooked for dinner. Tiresome, not thrilling nor original in the least. My least favorite story of those I selected. (Feb 1926)"Ancient Fires" - Haunted house, ghost of an Indian princess and reincarnation. Nicely done, but very familiar to anyone who has read a lot of these types of tales. Margery Lawrence handles reincarnation and lost love in her Miles Pennoyer stories better than Quinn. (Sept 1926)

"The Grinning Mummy" - What's an occult detective series without a smattering of Egyptology and a vengeful mummy? Incomplete, that's what. Here's the requisite angry mummified corpse on the rampage.  De Grandin is in fine form acting as a true detective in this outing. It's genuinely thrilling. Jules' habit of bizarre French exclamations adds "Nom d'un porc!" and "Dieu et le diable!" to his ever growing list. (Dec 1926)

"The Gods of East and West" - Jules enlists the help of a medicine man of the Dakotahs to help save Idoline Chetwynde (love that name!) from the grip of a spell cast by the malevolent goddess Kali. Only one bizarre French expression ("Nom d'une anguille!") but the action filled tale, the spells and rites and originality more than make up for the lack of odd vocabulary. A good one! (Jan 1928) 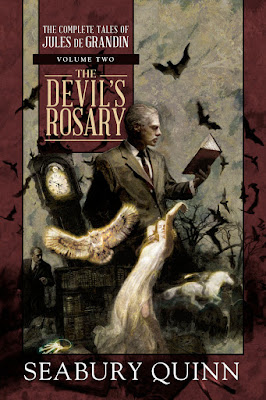 "The Serpent Woman"  - Jules and Dr. Trowbridge prevent a woman 's suicide then hear her story of being accused of her child's murder.  She claims he was not killed but stolen in the night. However, there is no sign of anyone having entered her home.  An impossible kidnapping!  This is one of the rare genuine detective stories in the de Grandin canon. The title of course reveals the culprit, but the discovery of who she is, how she accomplishes her misdeeds and why makes for gripping and entertaining reading. It even makes use of a genuinely surprising reveal. Added bonus: Quinn incorporates the Jersey Devil legend, probably its earliest fictional appearance. (June 1928)

"The Devil's Rosary" - A curse has befallen the Arkwright family. Nearly every one of them has died a violent death and at the site of each death a small red bead is found.  Haroldine Arkwright has found a red bead in her purse and is terrified she will be the next to die. Jules and Dr Trowbridge investigate and uncover another supernaturally enforced vendetta this time at the hands of victimized Tibetan monks. One of the more original stories making use of Quinn's fascination with Eastern religion and mysticism. (Apr 1929)

The five volumes that make up The Complete Tales of Jules De Grandin are published by Night Shade Books.  Each hefty tome is available through the usual bookselling websites in both new and used copies.  The most recent volume, Black Moon (vol 5), was released in March 2019. I still have three more volumes to acquire and with all the other books I have in my mountainous TBR piles I may never finish reading the entire collection.

Seabury Quin wrote pulp fiction in its purest form. It's text book pulp, a quintessential example of the early 20th century American popular storytelling and genre fiction. As such these are far from great literature but that doesn't make them any less entertaining. You need to enter the world of Jules de Grandin prepared for not only over-the-top action and melodrama, but xenophobic comments and a generous supply of ultra un-PC descriptions of "foreigners".  But I am never one to be repelled by these sins of the past.  Horror stories and movies from every era are replete with similar embarrassing and shameful depictions. It's the imaginative storytelling that will get me all the time. And I'm a sucker for learning new mythology, superstition and ancient rites. The de Grandin stories are chock full of that too and to me that's what makes them worth reading.