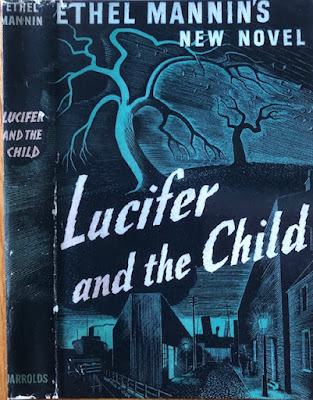 From its first sentence (“On the 18th March, 1618, Margaret and Philippa Flower were burnt at the stake…for witchcraft.”) Lucifer and the Child (1945) sets up what ostensibly will be a novel of witchcraft, black magic and the evolution of a child cursed by her afflicted past. The title is deceptive. True there is a man with horns, there is a child, there is even a bona fide witch, but it is so much more than bubbling cauldrons, sinister incantations, a mysterious and seductive man and the child entranced with his charismatic personality and all things forbidden to her by conservative often indifferent foster parents.

Ethel Mannin explores ethics, morality, faith, love, the inherent magic of the natural world and the ultimate mystery of devotion -- both earthly and spiritual -- and does so with stark frankness, uncensored sexuality and near mockery of convention. Jenny Flower meets the man she will come to nickname Lucifer – for he is so much like the Angel of Light fallen from grace – when she is seven years old in 1930. We follow her first meeting of the mysterious man and subsequent meetings, each taking place on one of the four witch’s sabbaths over the next seven years. Her introduction takes place in a forest and like Adam and Eve after eating the forbidden fruit Jenny has hers eyes opened to a natural world of splendor and mystery. Her first act of daring, her first lesson of this new world, involves intently staring at a toad in attempt to strike it dead. Much to her surprise she is entranced by the toad, an animal she never actually looked at before. While staring supposedly with true hate she cannot bring herself to kill it and she spares its life. But the more time she spends with Lucifer the less kind she will be with her experiments.

Later she is drawn to the hovel of Mrs. Beadle, the town crone often shunned for being a witch herself. Mrs. Beadle sees in Jenny her younger self and nonchalantly begins to impart some of her arcane knowledge to the girl. They start with astrology, the names of the fallen angels, Lucifer and his followers whose names have become synonymous with demonology, and the Chart of the Characters of Evil Spirits. It is an education in complete reversal of her school and church learning. Soon Jenny and Mrs. Beadle are practicing spells together. The crone is always standing over her bubbling pot stirring up ingredients for unctions, philtres and potions, while simultaneously feeding Jenny’s insatiable curiosity for forgotten magic and unnameable rites.

Marian Drew, a schoolteacher, begins to notice a change in Jenny. She is concerned about her desire to run off to Mrs. Beadle’s, her derision of other schoolchildren. Jenny's constant talk of the man with the horns is alarming and her eager anticipation of his return on Candlemas or Lammas or Halloween, which fatefully happens to be Jenny’s birthday, inspire Miss Drew on a mission to save Jenny from both Mrs. Beadle's baleful influence and the friendship of the mysterious man -- if indeed he even exists.

Along the way we also meet Jenny's only real friend who she thinks is her aunt. Actually Nell Flower is Jenny's real mother who gave her up to her sister to raise. Nell is a free spirit, glamorous, unconventional who can't be bothered with the responsibility of being a mother. She doesn't even know the identity of Jenny's father nor does she care. She lives for her freedom, her life as a barmaid, her elaborate head-turning wardrobe, her cosmetics. Jenny loves her. Despite Nell's surface friendship and her referring to Jenny as a brat she is devoted and protective of her daughter. However, she never wants Jenny to know that she is her real mother. In an interesting twist of the plot Nell will also try to save Jenny from Mrs. Beadle and sever what the crone and the mysterious man assure is Jenny's cursed past.

Finally there are Jenny's foster parents -- aunt Ivy and her husband Joe. Jenny has two brothers, too, in this sadly loveless household. Ivy loses her patience with her willful but friendless child and never seems able to keep her disciplined. She resorts to screaming, yelling threats, and on occasion beating. Joe, the indifferent father, is also violent. Jenny, however, is immune to punishment of any sort. She seems to be a child of the devil himself. Yet Ivy doesn't seem too worried for Jenny or her slow transformation from a misbehaving yet innocent girl to a worldly, cynical and vengeful teen.

Mannin’s novel is a wondrous book that raises intriguing questions about faith and love. Miss Drew acts the voice of reason and common sense who argues with Lucifer, a literal Devil’s advocate. She and Jenny are forced to reckon with the inextricably connected dichotomies of good and evil. One cannot believe in God without also believing in the devil, Lucifer constantly reminds the woman and the girl. Are not miracles the scared version of black magic? If you believe in Jesus raising the dead, changing water into wine and walking on water how can you easily dismiss the ability to communicate with dead spirits, making love potions, and flying through the air at midnight? Angels cannot exist without devils. Light is the forever companion of dark. What you truly believe in, your faith, shapes who you are for life. And that faith ultimately makes what you believe in exist.

The writing often transcends a deceptively straightforward didactic style to achieve true poetry, especially in the sequences when Mannin celebrates the creatures of the forest, the flowers of a spring afternoon, the wild fury of the ocean where Lucifer who says he is a merchant seaman spends much of his life. The words carry a rhythm like beautifully constructed verses, and her frequent repetition of phrases like “the ice-green, ice-cold waters of the Gulf of Finland’ are like the chanting of Mrs. Beadle over her pot of mystery potions. Mannin calls on myth and legend when describing “the bells of lost Atlantis ringing under the sea.” She resorts to ancient archaic spelling like magicke and is compelled to quote Marlowe’s Faustus. Miss Drew cannot help but recall the line “Tis magic, a magic that hath ravished me” when she discovers that she has been willfully seduced by Lucifer despite all her attempts to resist him and draw him away from Jenny. In uttering that line Marian comes to realize that she welcomed the seduction and longs to see him again with a fervor almost as powerful as Jenny’s rabid devotion.

The conflict comes in the fight for Lucifer's attention. Jenny grows ever jealous of his closeness to Marian Drew. Marian slowly realizes she cannot save Jenny and must resort to bargaining. When she asks Lucifer to promise to leave Jenny alone for seven years she cannot foresee that promise will set in motion a fateful plot that will be the undoing for the trio.

Lucifer and the Child uses a supernatural motif that makes one recognize that magic is ever present in the world. That the wonders of the natural world are as hypnotic as any spell or incantation chanted in a candlelit kitchen. And yet there is danger in that attractiveness and seduction of the unknown. In the hands of Mannin's contemporary writers of supernatural and horror this novel might have become a lurid piece filled with gruesome scenes and nightmarish apparitions. But as Mannin would have it the horror is more subtle, heartwrenching rather than blood spilling. We watch the irrevocable destruction of a soul, the dissolution of friendships, and a fulfillment of what amounts to a fatalistic worldview.

After being out of print for decades Lucifer and the Child has been reissued.  The adventurous Swan River Press based in Dublin, mostly devoted to reprinting forgotten works by Irish writers of supernatural and fantasy fiction, has published a gorgeous new volume of Ethel Mannin's cult masterpiece. Only available for purchase directly from the publisher ordering info can be found on their website here. The book includes a well researched foreword by scholar Rosanne Rabinowitz which sheds light on the novel's re-discovery and Ethel Mannin's fascinating life as an iconoclast and counterculture figure.