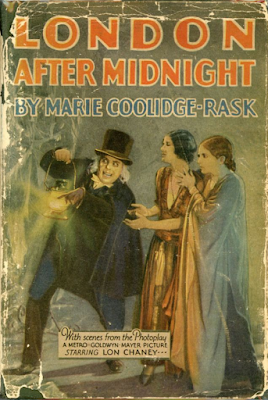 London After Midnight – the stuff of legends. For those of you not in the know let me fill you in. It’s one of those “lost films” from the silent era, meaning that no known prints exist today. The negative was destroyed in a warehouse fire back in the 1960s. The hunt continues for anyone on the planet who might have a copy of the movie. Interest in this supposed horror movie – one of many from Tod Browning, the child of the night who gave us macabre silent movies like The Unholy Three (1925) and The Unknown (1927), the notorious circus thriller Freaks (1932), and the first movie version of Dracula (1930) – was so obsessive that back in 2002 a movie maven “reconstructed” the film using photo stills and a copy of the screenplay. I’ve never seen it, it’s been called everything from "a brilliant video evocation" to "a huge waste of time and energy." All this leads me to my own fascination with the movie. I had hoped one day I would see it after learning about it in a book on movie monsters I read when I was about 13 years old. But later around my college years when I discovered its legendary status as a lost film I all but gave up hope. Then sometime around 1999 or 2000 I stumbled upon a copy of the Photoplay Edition of London After Midnight through sheer serendipity at an antique mall. And when I discovered it was only $8 I could barely contain my excitement. As I paid that ludicrously cheap price I felt as if I were stealing it. 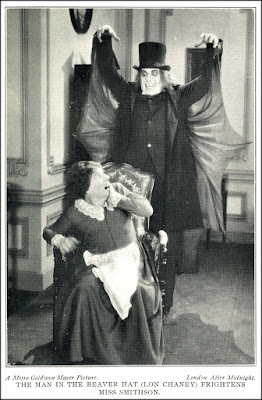 All this brings me to the actual book and story of London After Midnight. Marie Coolidge Rask, working from Tod Browning’s screen story and the scenario of Browning's frequent co-collaborator Waldemar Young, penned the novelization of the movie. This is all we have to go by as to the film’s story and content. That and, of course, the myriad movie stills that have been reproduced for decades. Some of the eight stills from the Photoplay Edition are featured as illustrations for this post. I was hoping for an eerie tale of madness, murder and vampires and a few good frights. After all Lon Chaney, the Man of 1000 Faces, was the star of the movie. He was terrifying as the first screen Phantom of the Opera and still, IMO, the best non-singing performer in that role. Based on photos in the book he played two roles in the movie. But as is the case with many of these longed for reading experiences that finally come to fruition reading the story was a huge let down. London After Midnight – at least the novelized version of the story – is a messy and transparent murder mystery couched in Gothic excesses and weird or supernatural incidents that all turn out to be rationalized.

Ingredients: one haunted house, a suspicious suicide, a murder made to look like the work of a vampire, two creepy and kooky neighbors who put on a spook show for the police investigating the murder, a plethora of mysterious incidents and a ridiculous number of characters in disguise or using alter egos. It all reminded me of early 20th century French detective novels with their fascination with policemen in disguise and fantastical plot elements. Browning who concocted the story may well have been a fan of not only Bram Stoker and Edgar Allan Poe but Maurice LeBlanc, Gaston Leroux and Marcel Allain, creator of master criminal Fantomas, the English translations of those books were still selling well in the US in the late 1920s. 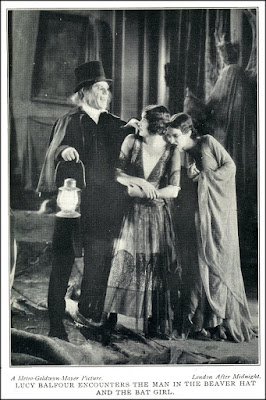 And what of the mysterious appearance of Colonel Yates, straight from India, who claims to be a former military comrade of Sir James Hamlin, whose ward is Lucy Balfour, Roger’s beautiful daughter? Why did the Colonel show up so conveniently just as Balfour House was leased by the Man in the Beaver Hat? Why does Yates know so much about the occult, and vampires in particular?

Rask's storytelling is modeled on a cumbersome Edwardian prose style infused with stilted dialogue, overly complex sentence structure, antiquated vocabulary, and an abundance of histrionics and melodrama. She gives away the fact that the suicide is a murder almost immediately and is clumsy in trying to create suspense and surprise revelations. It is very obvious from the start who killed Roger Balfour and his son Harry. Even the motive is obvious. And that perhaps is the creepiest part of the book. In the book’s denouement the killer has been hypnotized into recreating Roger Balfour's murder. Reading the killer’s pronouncement of his love for a 15 year-old girl and his “covetousness of her since she was an infant" was nauseating and gave me chills in a manner completely unintended by the writer. Not exactly the kind of thing that reads well at all in the 21st century. 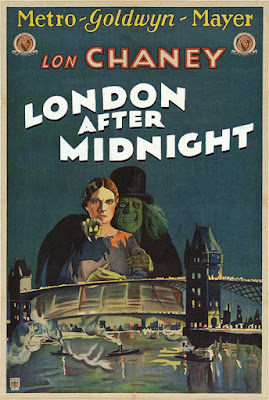 For those readers who absolutely must read London After Midnight to have their curiosity satisfied you are in luck. Couch Pumpkin Classics, a POD outfit, released a reprint of this Photoplay Edition in both paperback and Kindle digital versions. A hardcover is also available in the used book market for a hefty price. I know nothing about Couch Pumpkin's other works (if there are any), but this reprint does contain an informative introduction outlining the history of the movie’s legendary status as a lost film and goes into greater detail about the “reconstruction” of the movie done in 2002 for Turner Movie Classics. But be warned: the story is less than thrilling, a tepid variation of a Scooby-Doo cartoon plot, and I guarantee major disappointment. Better to look at the stills and let your own imagination conjure up your own private version of a fine example of macabre moviemaking with genuine frights and thrills.

Next week’s Friday Fright Night episode will be a vast improvement on this offering.