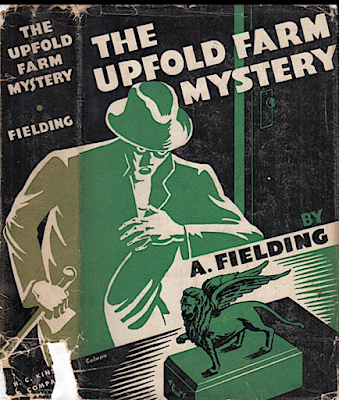 THE STORY: A group of artists staying at Upfold Farm are forced to abandon their creative pursuits and deal with the harsh realities of the life when one of them is found horrible murdered. Playwright Eugene Matlass assists the local detective with the investigation mostly because the policeman is an admirer of Matlass's detective hero Michael Hare who appears in a series of radio plays. Adding intrigue is a strange brass box with a "St. Mark's lion" that seems to be at the heart of a series of mysteries surrounding the death of painter Herbert Walsh. Inspector Pointer makes a last minute appearance and tidies up a complicated and fascinating murder case.

THE CHARACTERS: As usual with A. Fielding the opening chapters of The Upfold Farm Mystery (1931) are crammed full of exposition, character introductions and relationships, and all sorts of minutiae, some of it extraneous but some extremely important to the solution. The story is all the more interesting because all of the suspects are creative types. There are three painters, a pianist and a playwright as well as two friends staying at the local rectory who make up the motley group. Hillock, is the farmer landlord for four of the men and his daughters Lily and Verbena round out this large cast. Remarkably, every single person figures into the complex plot and there are more than a couple of miscreants among them in addition to a clever killer who manages to complicate the case with machinations and exploitation.

I usually talk about the story along with the characters but this is one that practically defies any type of summary. Just as with my experience with Tragedy at Beechcroft I kept reading at a rapid pace eager to know what else would happen, who else would mess about with evidence, and how much the killer would get away with. In lieu of the usual character sketches and highlighting key scenes I'll give you one of those Dell Mapback summaries and tell you this mystery is about: a brass box with a winged lion atop, a missing clothesline, several well done landscape paintings, a cord with two stones attached at either end, a dying message, a blind eyewitness, and a llama ranch in Peru. The detection here is top notch and the surprises in the final wrapping up are the kind that make me smile with admiration and have me shaking my head at the outrageous manipulation in the storytelling. 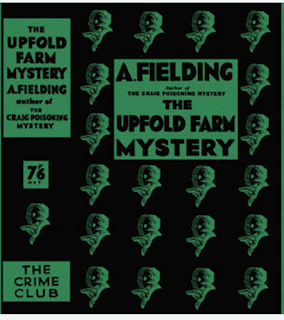 INNOVATIONS: Fielding is one of the unsung masters of misdirection in the early part of the Golden Age of Detective Fiction. His plots can, as in the case of this excellent novel, be labyrinthine in their intricate construction and teeming with clever red herrings and clues that lead you down the garden path. Among the clues and red herrings in The Upfold Farm Mystery there is one feature in this story that is absolutely mindblowing. Reminiscent of a convention that Christie used repeatedly and expertly I wish I wouldn't fall for this one nearly every time I encounter it. Largely my gullibility is due to giving myself over to an expert teller of tales who, like a good magician, knows where to draw your attention when in fact you should be looking at something else altogether.

Verbena Hillock, the younger daughter, is blind and Fielding inventively uses her as a highly unusual witness. Like many blind characters (especially blind detectives) Verbena is equipped with nearly superhuman senses to make up for her loss of sight. Her hearing is so acute she can tell who is approaching by the sound of footsteps. Changes in the usual rhythm of someone's gait give her hints about their state of mind. If the steps are more rapid, the person is in a rush and preoccupied, for example. She also has refined sense of smell that tells her who is near -- smoke trapped in a woolen coat, perfume and even the dampness of rain on clothing all play a part in the story. This is clueing that most reader's will overlook as colorful detail, just part of her personality. Not so in a Fielding detective novel. One of my favorite parts reminded me of The Moonstone when Verbena pulls off a Rachel Verinder style bit of evidence tinkering that took me by surprise and made me smile a bit too knowingly.

Early in the book the characters bring up of rural superstitions that I thought were going to play a big part in the story, but this talk only serves as atmosphere setting up a tone of ominous menace and hinting at Nature working its uncontrollable way on the lives of the characters. Someone burns elderwood and sends Hillock into a nervous fit as he knows it's unlucky and brings bad luck. A brown owl hoots several times in the daytime also causing uneasiness and worry as an omen of future ill events. 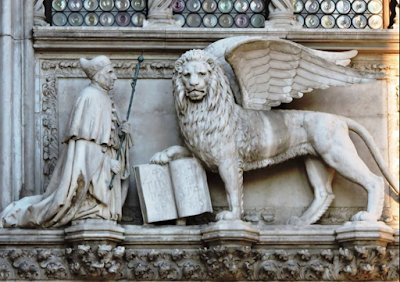 THINGS I LEARNED:  The winged lion on the brass box is referred to as a St Mark's Lion. The lion's raised paw (see DJ illustration above) is supposed to be holding a small book symbolic of Mark's gospel. In the novel the small book has broken off and is lost. The lion seems to be raising its paw as if it were a dog commended to "Shake!" I went looking for images of a St Mark's lion and found a zillion of them! St Mark is, of course, the patron saint of Venice. Why did I not remember that? He and his famous lion can be seen everywhere throughout that Italian city. Several of the most often photographed winged lions, like the one pictured here, are found in and around the Doge's Palace in Venice.
Posted by J F Norris at 8:28 AM