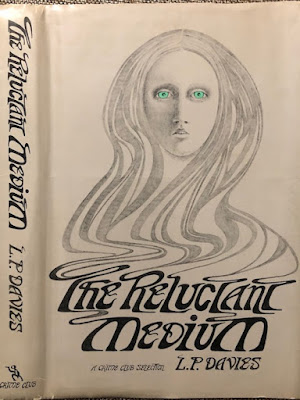 THE STORY:  A self-described "business consultant" is recruited into becoming a ghostbuster when strange apparitions manifest themselves at Butchart House. Either a ghost is seeking retribution or a very clever and cruel human is serving up a nasty bit of revenge. David Conway, with the help of his policeman friend Clifford Pearson, digs up the past and unearths secrets spookier than a mere ghostly visitor.

THE CHARACTERS: Jennifer Rawson, ward of the ancient invalid Matthew Rawson, turns to her friend David Conway to help root out the truth of the ghostly visitor who scared the daylights out of her houseguest Sheila Brand.  The apparition complete with lemony scent and wailing and moaning seems to be the ghost of Walter Hudd, a former business associate of her "uncle" who was framed for a crime he never committed.  He committed suicide several years ago vowing shortly before his death to get his revenge on those who wronged him.  When a sample of Hudd's handwriting delivered in person by a woman spiritualist who claims the message was part of an seance and automatic writing she composed while under a trance even Matthew Rawson, Jennifer's foster father and guardian can be convinced that something supernatural is happening.  David Conway is however not so gullible.

This is a fine example of the ghostbusting occult detective subgenre wherein an amateur detective is determined to prove ostensibly supernatural events are nothing more than the work of clever frauds and con artists.  Fictional accounts of these types of detective novels were very popular in the days following World War 1 when spiritualism had a resurgence and fraudulent mediums were quick to capitalize on the overwhelming number of people grieving for loved ones lost to the carnage of war.  The Ghost Girl (1913) by Henry Kitchell Webster, is one of the best examples of crooked mediums preying on the grief-stricken and draining their bank accounts with the promises of communication form the Great Beyond.  In The Reluctant Medium (1967) we find two questionable spiritualists in a mother and son team, Mrs. Proudfoot and Sidney. David Conway visits their very freeform operation run out of the Proudfoot home hoping to see some of the usual tricks and gimmicks of fraudsters. A surprise is in store for David when, while in an attempt to communicate with one of the regular client's dead relatives, Mrs. Proudfoot in a weird trance begins to utter words and phrases that have meaning only to David.  He is spooked and shaken and leaves the Proudfoot home thinking that the old woman may in fact have a supernatural gift.

Later he hears a confession from Sheila Brand, the witness to the ghostly manifestation at Butchart House. She too feels that she has some sort of talent. To her it is a curse, not a gift.  Eerie things happen wherever she goes: strange visions appear, odd smells manifest and other worldly voices cry out to her.  She is convinced the ghost is all her fault and begins to behave increasingly neurotic with paranoid imaginings. Everyone around her fears she is headed for a nervous breakdown. David listens attentively, leaves Sheila in the care of the women, but treats all he hears and sees with suspicion. He is sure that Simon Proudfoot is colluding with Walter Hudd's son Leslie in a sort of combined blackmail and psychological revenge scheme.  The bulk of the story is spent in some complex detective work as David looks into the past lives of Walter and Rose Hudd and the bizarre trail of foster families where Leslie ended up after his father committed suicide and his mother refused to raise her own child.

Then tragedy strikes. Just as David is about to visit Mrs. Hudd for a second time and get the full details on Leslie's past history and some connections to the Rawson family she has a fatal accident. It seems all too convenient to David, ever quick to suspect bad deeds and devious characters at work behind the scenes. He convinces Det.-Sgt. Pearson to treat the accidental fall as a possible murder. Together the two conduct a covert investigation combining the ghost activity at Butchart House with Mrs. Hudd’s death. What they uncover will prove to be more astonishing than the possibility of a real ghost or genuine psychic ability. 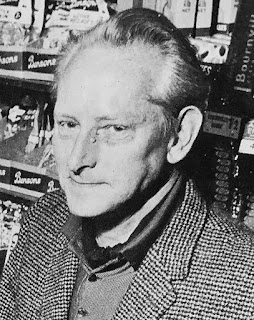 INNOVATIONS:  Of all the books I have read by L. P. Davies this one comes closest to a traditional detective novel. That is also an occult detective novel is an added bonus. There are well planted clues, lots of genuine detective work, surprises galore, several shocking deaths beside Mrs. Hudd's, and a final twist right out of the pages of an Agatha Christie novel. Yes, literally out of the pages of a Christie novel. I dare not tell you the book that has the exact twist, but that Davies managed to fool me is the highest praise I can give both the writer and this book.  Once again, I found myself gasping aloud on the bus when I read a single sentence in the penultimate chapter.  "Just like in UNMENTIONABLE TITLE by Agatha!" I said to myself. I challenge any Christie fan to read this mystery novel and pick up on the trick Davies uses. The story is so well told that never once did I ever suspect anything off in the narrative and still he easily pulled the wool over my eyes. It was masterfully accomplished and yet should have been all too obvious!

OTHER EDITIONS:  The Reluctant Medium was originally published in England under the title Tell It to the Dead (see cover of that edition above). It is this edition that is most easy to find in the used book market.  The US edition, a copy of which I found only few weeks ago as a cheap ex-library book in surprisingly excellent condition, is very scarce. The book was released under one of Davies' many pseudonyms. He wrote two novels as "Leslie Vardre" and apparently wrote several short stories using that pen name, too.  I have yet to see any of his short stories under any name, let alone his own.