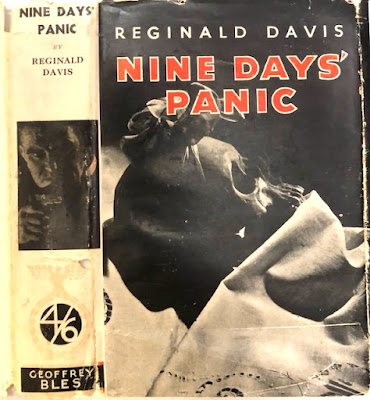 THE STORY: Nine Days’ Panic (1937) is an absurdist black comedy that is also a send-up of all manner of detective novel conventions. The madcap plot incorporates mysterious disappearances, vanishing corpses, the impossible substitution of people for skeletons, disguises and impersonation, Celtic legends and cult rituals, and ribald and farcical humor.

THE CHARACTERS: Littleford in the Vale is at the mercy of a madman with a bizarre sense of humor. We begin with the theft of a prize winning vegetable marrow and village idiot “Mazed Thomas” playing detective and accusing the Mr. Stiggins, mayor of the village, as the culprit. Shortly thereafter, Thomas' body is found bludgeoned and surrounded by the smashed remnants of the formerly impressive giant squash. On the same day Bessie Luscombe, daughter of the owner of the local pub The Prodigal Son, disappears from her bedroom and a red skeleton is found in her place. Also, a man dressed in obnoxious mustard yellow plus-fours is found hanging from a tree. However, when the police go to look for the body they find only the rope freshly cut and no corpse in sight. Are the events of the night over yet? No! 95 year-old Rowland Pye has also disappeared from his home and yet no one saw him leave through the front door.

What to make of all this madness? Despite the talk of ominous death rattles and the presence of a legendary fetch the police will have none of the local's superstitious nonsense. They know a real human is behind all these shenanigans and they are determined to ferret out the miscreants, pranksters and kidnappers – and a possible murderer.

Over the course of nine days more young women will disappear and more skeletons will pop up in the strangest places. Local P.C. Wilks is relieved when Major Tinmouth, the Chief Constable of Littleford on the Vale, decides to call in Scotland Yard. Inspector Ipswich and his resourceful cohort Sgt. Pike (with a very unusual talent) take over the investigation and soon turn up the corpse of the hanged man, but are baffled by the near daily vanishings of young women. They still haven’t a clue where the women have gone. 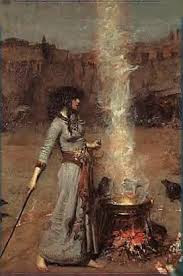 Amateur sleuths only complicate matters. After receiving an anonymous note informing him of his impending death Rev. Timity joins forces with Dr. Appleby and Dr. Smyth-Crowcombe, the director of Barrow House, a nearby sanitarium and mental institution. Together the three men examine the clues and try to learn the whereabouts of the missing girls. A note left at the scene of one of the disappearances takes the form of a cryptic rhyme: “I do go with my sisters to search for the way./We go to seek in the valley./Light in the dark. Life in the grave./Karedwan—Karedwan—Karedwan!” Eventually this will lead the physicians to research village folklore and ancient Celtic rituals meant to summon the goddess mentioned in the rhyme’s final line. Davis once again finds ample opportunity to explore his fascination with superstition, this time delving into arcane Celtic legends and the forgotten works of the 6th century poet Taliesin.

The village is thrown into chaos with crimes bordering on the absurd. At one point Dr. Smyth-Crowcombe exclaims, “This is becoming ridiculous!” And of course it is. Yet on reflection it is also terrifying. Fear is exactly what the mysterious force behind all the confusion is after. He (or is it they?) needs the village to be so frightened that they won’t set foot outside their homes. For there is of course an ulterior motive to all the insanity of skeletons in beds, missing girls, and corpses that suddenly turn out to be very much alive. All will be discovered in the intricate underground labyrinth of tunnels that lead to a cavern of secrets and untold horror.

INNOVATIONS: The book is replete with all sorts of amusing literary allusions and folkloric discussions. There is a lengthy section on the existence of ghosts led by Dr. Appleby talking about the “cutting short of a normal span of life by violence” and expanding on the concept of the restless spirit and hauntings so common in ghost stories. Rev. Timity then takes up the discussion adding his opinions on the metaphysical and spiritual sides of the argument. 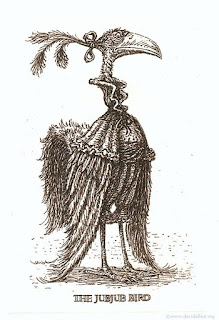 Daniel Biggs (aka Happy Dandy) is an eccentric young man who as far as the villagers are concerned is the new “Mazed Thomas”, and even battier than the former village idiot. He has a remarkable way of talking leading the reader to suspect Dandy may not at all be as “mazed” or stupid as he seems to be. In one amusing scene he spars humorously with the police by quoting Lewis Carroll. He talks about galumphing back from Moping Copse, the aptly named Gothic scene of the hanging. Inspector Denman then asks, “What’s all this beamish boy stuff?” Dandy tells him he found a bit of rope. “You were going to say you found it on a Tumtum tree, weren’t you? But if you tell me that you’ve been snaring Jubjub birds or slaying Jabberwocks—I’ll slay you!

THINGS I LEARNED: I learned all about Taliesin who is credited with writing a poem called “The Spoils of Annwn” which serves as the inspiration for one of the villain’s bizarre plans. Annwn is the name of the Otherworld in Celtic mythology. In that poem I also learned all about Karedwan – or Cerridwen – an enchantress found in Welsh mythology sometimes referred to as a patron goddess of witches and wizards (according to a mythology website I uncovered). The spelling variations of her name -- from Davis’ Anglo phonetic rendering to Cereduin – made it a bit difficult to find out exactly what Davis meant by Karedwan. Only when Taliesin and his poem were mentioned late in the novel did all my Googling pay off.

QUOTES: The amateur sleuths pore over a hand delivered letter and Rev. Timity says: “Very neatly printed. That eliminates about seventy –five percent of my parishioners, I think.”
“Seventy-five percent? Why Good Lord, Timity, it eliminates ninety-nine point nine percent of the population of Littleford in the Vale!”

One day, a man shuts and locks the door on an empty room in his house and pockets the key. The next, he produces the key, unlocks and opens the door. And what does he see? White rabbits? Pigeons fluttering out of top hats? A magician’s nymph still smiling happily after being tied up in a box and spitted through and through by many swords before your very eyes? No, ladies and gentlemen. This trick has been performed before none of the crowned heads left in Europe. Now – on with the light. Off with the sheet. Hey presto! 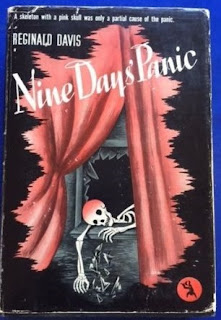 One dead man, ladies and gentlemen, with puffy swollen face, and the end of a rope knotted round his throat. No deception whatever.

EASY TO FIND? Of the three mystery novels Reginald Davis wrote this one is the easiest to find. However, very few copies are currently for sale and most of them are in the Doubleday Crime Club US edition. The UK edition is not too surprisingly rather scarce. Finding one in a DJ as I did last month was a rather coup. My copy is a later edition based on its cheaper price 4/6 (rather than the standard 7/6 for a first edition) as well as a complete listing of all three books mentioned on the front flap of the DJ.
Posted by J F Norris at 12:07 PM