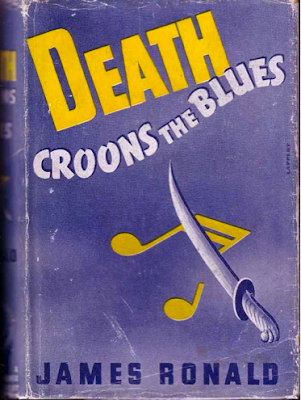 THE STORY: Ex-con burglar Bill Cuffy cannot resist what he thinks is an easy theft. He'll break in and steal as much as he can from night club singer Adele Valée while she is out performing. In the midst of his gathering jewelry and cash he discovers her dead body in a gruesomely bloody bathroom. Cuffy flees the murder scene and foolishly (yet unknowingly) takes with him the bizarre murder weapon, an exotic knife from Asia. He ends up in the home of Julian Mendoza who finds Cuffy's story hard to believe but is willing to take a chance on the crook. Mendoza tells Cuffy to turn himself in for the burglary and he will back him up. He promises that he will find the real culprit and get Bill out of jail before the police can formerly charge him with Adele Valée's murder.

THE CHARACTERS: Death Croons the Blues (1934) is the second novel to feature James Ronald's only series detective, crime reporter Julian Mendoza. We learn a lot about Mendoza in a few paragraphs. That he has lived a life of adventure as a journalist. Among his many souvenirs he can count a disabling injury he sustained after a run-in with a lion in Africa when he was 33 years old. The injury left him with a partially paralyzed right leg and he now walks with a limp and often must use a cane. He is one of the many reporter detectives who were popular with writers during the heyday of crime reporting. Like Robin Bishop (in the early novels of Gregory Homes) he outsmarts the police at their own game often beating them to the crime scenes, finding evidence that he withholds until it suits his purpose to hand it over. Late in this outing he also recruits a small band of journalist colleagues as watchmen and spies who fool suspects into thinking that they are being watched and guarded by plainclothes detectives. His disability does not prevent him from acting out and defending himself from dangerous criminals. More than a few times his cane comes in handy in disarming gun toting aggressors.

This is a straightforward detective novel with a lot of action sequences. We get some unusual point of view scenes too from the primary suspect Honorable Timothy Brett who was being blackmailed by Adele and who owns the twin to the Ghurka knife that Cuffy took from the murder scene. The two knives are prominently displayed in Brett's home and anyone who knows him would immediately recognize the weapon used to kill Adele. Mendoza is sure that such a blatant use of a unique weapon is sure sign of Brett's innocence and that someone is framing him for the murder. It doesn't help that Adele's nosy neighbor Miss Purdy saw a man knock three times on Adele's front door and enter her apartment the very night she was killed. She also has a eidetic memory and gives an intricately detailed description of the man matching Timothy Brett's likeness perfectly. 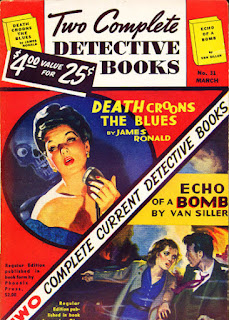 Mendoza would like to find Brett and get the truth from him. But Brett is terrified because he also stumbled upon Adele's dead body, got blood on his coat which he left at the scene, and fled to beg for help from one of his friends. He goes into hiding with Mendoza hot on his trail. So is his girlfriend Lady Constance, a formidable aristocrat who wields a revolver, threatens Mendoza twice, and has a violent confrontation with a nasty bigoted landlady that ends with slaps to the harridan's face and a shove into the hallway.

Speaking of formidable let me not overlook Mrs. MacDougall, Mendoza's landlady who becomes his right hand man in couple scenes. You don't want to mess with her either. And she doesn't need a pistol to make her frightening. She manages to subdue Cuffy in the opening chapter in an unexpected way that made me laugh. Later we see her wise and compassionate side when she and Mendoza help rescue the ailing Mrs. Cuffy from that nasty cow of a landlady. They stow her safely in a nursing home retreat to prevent her from becoming the next victim of a murderer who will do anything to cover his tracks.

INNOVATIONS:  Death Croons the Blues is the closest to a traditional detective novel of the books I've read by James Ronald. The story still has its "thrillerish" elements, but the detection is sound, clever and often adheres to fair play techniques.  Mendoza reminds me of Perry Mason in his earliest adventures, when he would infiltrate crime scenes, monkey with evidence, switch guns and do anything to protect his client.  Mendoza resorts to exactly the same shenanigans but does it all for himself in his thirst to scoop a news story that will sell lots of papers. He finds Brett's overcoat at Adele's place, goes through the pockets and finds papers that he keeps for himself. He only turns over evidence to the police when he's good and ready. Thanks to these leads Mendoza also manages to question suspects long before the police even know a person is linked to the murder case. His actions infuriate Inspector Howells who would prefer that Mendoza either cooperate or just go away. Of course there are also consequences to Mendoza's brazen flaunting of the rules and he endangers the lives of several people in his desire to uncover the truth.

QUOTES:  Rooms. No beds. No board. Just "rooms." Four walls and a door. It was one of those houses in which every corner lodges an individual, or a whole family; in which every tenant has his own sticks of furniture and rags of bedding, his own greasy sink and grease spotted stove, his own domestic troubles. In which one bathes standing up with a sponge and a basin of water. In which before gassing oneself to extinction one must insert a pocketful of coppers in the voracious mouth of a slot-meter. In which no one cares if the occupant of the neat room lives in sin or dies in misery. In which one can hide...

"Sorry if I hurt you... But a woman with a gun always makes me nervous."

"He denies it, of course. But, then, he wouldn't be the figure of finance he is if he weren't a facile liar." 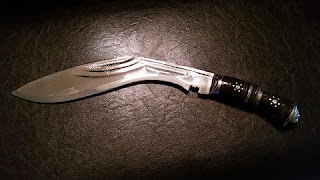 THINGS I LEARNED: The murder weapon is described as a Ghurka knife. This is a misspelling of Gurkha, the name given to a group of Nepali speaking soldiers who served in India. A drawing of the knife appears on the dust jacket illustration of the US first edition above, but is inaccurate.  That sword looks more like a saber to me rather than the knife used in the murder. The Gurkha knife or kukri, as it is known in its native Nepal, has a blade that looks bent rather than subtly curved (see photo above).  It was developed and used by the Nepalese army centuries ago and has been adopted for use by contemporary Indian and Pakistani military. 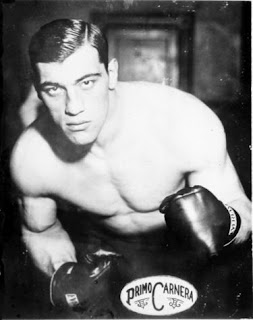 On page 58 a policeman quotes a witness who lives in Adele's apartment building: "She told me she'd seen a man running down the fire-escape. A big, beefy man with matted hair and ferocious expression -- Carnera or King Kong by her description." He is referring to Italian boxer Primo Carnera (1906-1967) who was 6' 6" tall and 275 lbs. at his heaviest, one of the most massive and imposing boxers of the pre-World War 2 era. From June 1933 to June 1934 he was the World Heavyweight Champion. In addition to his boxing career he appeared in a handful of movies in the USA, England and Italy between 1931 and 1959.

In the 1930s in England members of the Automobile Association were given their own personal keys to open the A.A. call boxes which had emergency phones inside. Apparently you could call anyone, not just emergency services or the police. Mendoza uses an A.A. box to call his newspaper offices and dictates his solution of the crimes to his editors and copy staff so that he can scoop everyone in the next edition of Morning World. 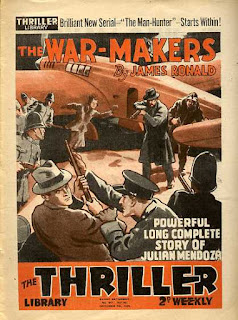 THE AUTHOR: There is little information about James Ronald on the internet. In the back of one of my US editions of his novels there is a lengthy biographical blurb. I'm not sure how truthful it is but it makes him seem to be a colorful and humorous man, and it made me smile. Ronald writes that he voluntarily left the UK, but another source I found says that he was deported. For what reason I have no idea. He lived in Fairfield, Connecticut for most of his adult life.  Here's the blurb that Ronald no doubt wrote himself:

“At the age of fourteen James Ronald, a native of Glasgow, came home from school and announced that he would never return. His mother was distressed, insisting that she would not have an idler in the family, so from then until he was seventeen he was in and out of a series of jobs, about thirty in all. He even ventured as far as Chicago where his experience included everything from a job paying four hundred a month to a job as dishwasher when he slept on cold park benches. At twenty-one he inherited $10,000 but it took him only nine months to spend it. Back in England again floating from job to job he was seriously injured in an automobile collision and for three months was in the hospital with a broken hip. Crippled for a year he spent his time writing short stories and his success at the job of writing has kept him at it ever since. He is the author of eight highly successful mystery novels. During the fall of 1939 he was an air raid warden in England. He is in the United States now for an indefinite period being ineligible for military service because of the motor accident injury.” 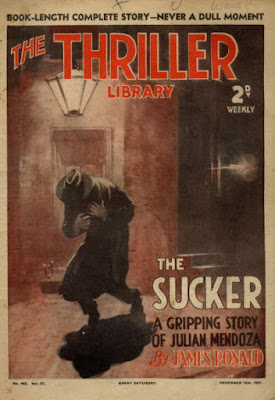