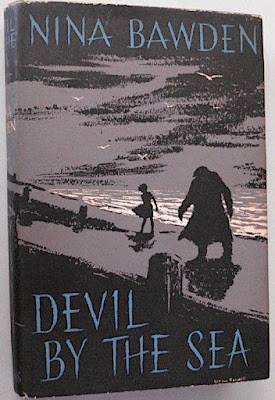 THE STORY:  Shortly after she wins a children's talent contest Poppet is paid attention to by a lonely misfit man. Nine year-old Hilary Bray watches both of them jealously and sees the man take Poppet by the hand and lead her away far from the pier and down the beach.  Hilary wonders where they are going and figures the man must be her father or uncle or some other relative.  But her good natured brother Peregrine who never tells lies says, "No he isn't. He's the devil. I saw his cloven hoof." Unknowingly Hilary has just become an eyewitness to what will turn out to be a horrible crime. She becomes obsessed with the man, wants to know him as well as Poppet did, and is determined to find him despite the fact that she truly believes he is the Devil by the Sea (1957).

THE CHARACTERS: Hilary Bray may be the focus of the story but we also get to know the entire Bray family, a collection of disconnected people in a discontented family. What little love they have for each other is buried by petty jealousies, bitterness, and longing for the unattainable. Alice is the mother no longer really in love with her husband Charlie who is wasting away from an unnamed illness. Janet, the eldest daughter, has met a posh young university student who she thinks she is in love with and would rather spend all her time with him.  Peregrine, the good child and youngest in the family, is at the mercy of his two sisters who taunt and tease him for being the innocent favorite. The loneliest member of the family is protagonist Hilary who retreats into a world of wild imaginings. She uses Peregrine's story of seeing the Devil as an opportunity to have a real adventure and make a real friend no matter how dangerous it all may turn out.

But disconnection is everywhere and is voiced by Charlie Bray in a key scene where he attempts to find closeness to his wife by explaining how far away he feels from everyone and everything.  "Alice, do you ever feel cut off?" he ask his wife. "From other people I mean. It's as if we were each enclosed in a bubble."  He is concerned that he doesn't know anyone or care about anyone.  He sees his life as a malingering illness like the time he had pneumonia and he worries about loneliness. Alice's blunt response? "Pull yourself together and be sensible."

Loneliness is omnipresent in the novel. Hilary's seeks to rectify her solitary nature in her desire for friendship with Dotty Jim, the misfit loner who lives in a caravan up on a hill far from the seaside amusement pier. She manages to visit him and watch him play with his pet bird and longs to preserve a secret friendship with him. But she also suspects that he may have been responsible for the disappearance of Poppet. When the little girl is found dead it may be that Dotty Jim is a murderous devil after all.

INNOVATIONS: Devil by the Sea is a dark and brooding story accented by religious beliefs that act as an insidious influence on all of the characters. The only music and songs that appear in the book are hymns or lugubrious folk tunes. Hilary decides to sing a baroque song by Georg Händel ("See Where Golden-Hearted Spring") at the talent contest, entirely inappropriate and a choice that earns her more embarrassment than recognition. Characters chide and taunt each other with sermon-like warnings: "God doesn't like liars" and "God does not like little boys who are greedy."  The children remind each other that consequences of sinful wicked behavior is an eternal afterlife in Hell.

Hilary is convinced that her brother is innately good and virtuous, that because he has never told lies his witnessing the Devil must be true. She is constantly comparing herself with her angelic brother and she casts herself in the role of ignominious sinner, too wicked and base to be deserving of love or friendship or anything of worth. The Devil then must be perfectly suited for her and she pursues Dotty Jim throughout the story ending in a confrontation in the surreal finale that takes place at the Fun Fair. After a delirious time spent on the merry-go-round, the Ghost Train, Helter Skelter and Big Laugh Hilary is pursued through a mirror maze by Dotty Jim. Exhausted and spent Hilary relents and is literally carried off to his caravan. Young Wally Peacock is the only person to notice Hilary is missing from the grounds of the Fun Fair and must convince the adults to help him find Hilary before she too ends up like Poppet.

CHILDREN'S EDITION:  After Bawden became well known for her children's books she was asked to rewrite Devil by the Sea for a juvenile audience. It is this 1976 rewritten version that is much easier to find than the original 1957 novel. I imagine much of the story about Alice and Charlie and the other adults was completely removed for the children's edition.

QUOTES: She remained quite still, her hands gripping the cold edge of the pipe. She was not surprised. She even gave a small nod of satisfaction as if to say: This is what I expected, after all. If he really were the Devil, they had not been chance encounters. They had been written in her stars. A spring of gladness rose within her. There was no more need to be afraid.

The content of her lie upset [Charlie] more than the lie itself. As a child, he had been taught to believe in the Devil as he had been taught to believe in God. Both the Deity and His counterpart had been invested, for him, with a mastery so awful that to pretend he had actually seen one or the other would have been a dreadful sin. He would have been expected to be struck dead on the spot.

She was absorbed in a world of new discoveries: that other people are not to be relied upon; that promises can be broken; loyalty abandoned; the world that is also childhood's end. 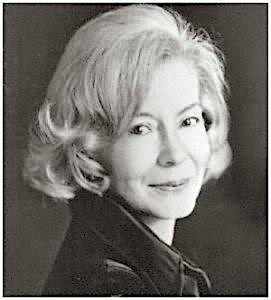 THE AUTHOR: Nina Mabey Bawden (1925-2013) spent most of her childhood in Essex and during the war was evacuated to Wales.  She won a scholarship to Somerville College, Oxford where she studied French then switched to PPE (Philosophy, Politics & Economics). While married to her first husband Harry Bawden she worked on her first novel, the thriller Who Calls the Tune? (1954) and following this with three other crime novels. She soon abandoned thriller format for mainstream novels that often examined the suburban middle-class family. She wrote her first children's novel in 1963 and thereafter alternated between adult and children's novels every other year. Her fiction has been recognized with wins for the Yorkshire Post Novel of the Year and the Guardian Award as well as nominations for both the Booker Prize (Circles of Deceit, 1987) and Carnegie Medal (Granny the Pag, 1996).  Of all her works she is perhaps best known for her children's book Carrie's War (1973), a story in part based on her own years as a war evacuee, which was adapted twice for TV in 1974 and 2004. In addition to her long writing a career she was also a Justice of the Peace serving as a magistrate in London from 1967 until 1976.

EASY TO FIND?  Because the book was reprinted in 1976 as a children's book it is crucial that you look for editions published between 1957 and 1967 if you are interested in reading the original novel.  All editions published afterward tend to be the children's version. The original was published in 1957 in the UK and 1959 (Lippincott) in the US.  The first paperback editions of the adult version of the novel are published by Sphere (1967) in the UK and Lancer (1966) in the US. The children's version is from Gollancz (UK) or Lippincott (US), each dated 1976. There are hundreds of copies of the book for sale in the used book market, but do be careful about entering publication dates depending on which one you are interested in reading.
Posted by J F Norris at 11:33 AM