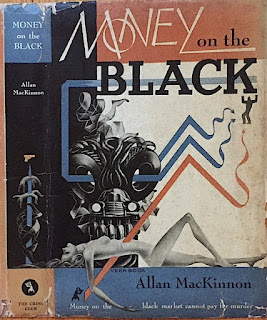 THE STORY: David Stanners, recently on leave from the army, is asked to help crackdown on black market thieves who have committed murder during their recent burglary of a fur warehouse. Money on the Black (1946) is rich with wartime details and its action packed, incident filled story is chock full of unexpected plot turns and shocks.

INNOVATIONS: MacKinnon has a sharp eye for character and action. The story is highly cinematic in its descriptions and many of the scenes are dramatically constructed as if intended for a movie or the stage. Mackinnon was in fact a screenwriter and wrote scripts for numerous movies, some of which were based on his stories.


Take, for example, the young elevator operator with a memory like a camera. He was a former page at a hotel until he literally outgrew the position. Now as a too tall elevator operator in an apartment complex he is training himself to remember the features and clothing of five people he meets everyday hoping this skill will help him land his dream job of being a reception desk concierge in at the same hotel where he worked as a page. His remarkable description of a man who leaves the scene of a murder helps the police track down a crucial witness.

THINGS I LEARNED: Really what made this one of the most fascinating reads so far this year was the exceptional attention to detail and the casual references to wartime that I was forced to research since all of it was foreign to me.

A passage mentioning "the Valor was burning low" led me to look up what exactly Valor referred to. I guessed that it was a kind of stove and some internet searching tells me its a brand name of a portable oil burning stove popular during wartime. I found a for Valor British Made Oil Stoves ad on a WW2 history blog that used the tagline "No smoke...No smell....No trouble." 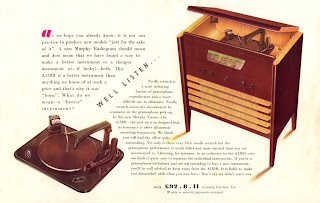 Radiogram confused me a bit. From the context I figured maybe it was a record player, but why the radio part? Turns out it's a fancy piece of cabinet furniture that combined a radio with a record player. This is exclusively a British & Australian term. In the US a similar item would be called a hi-fi (short for high fidelity).

One of the characters goes strolling down the street and turns into an alley "where an illuminated S offered safety". Just an offhand way to tell the reader that he went in search of an air raid shelter. Of course I had no idea until I looked it up.

Anyone would know that "a Wren emerged from a kiosk" does not mean an actual bird. I figured it was a female officer in some military unit since the scene where this passage occurs takes place in a military club. Didn't know that it was the slangy way to pronounce WRN for Women's Royal Navy. Related to this was a passing reference to an A.T.S. Girl who was also among the many soldiers and officers at the King George Club. The Auxiliary Territorial Service was the women's branch of the British army. It was formed in 1938 after 17,000 woman volunteered. By the end of 1943 there were close to 200,000 women in the A.T.S. I found this on the "Women at War" website: "Women were not allowed to go into action with the men or to use firearms, but apart from that they did the same work as the men and were paid the same wages. Jobs in the [A.T.S.] army varied from cooks, clerks, telephonists and translators to lorry drivers, motorbike messengers and engineers. Women did most of the driving in the army. They drove everything from staff cars to trucks and had to be able to maintain and repair the vehicles. The ATS anti-aircraft crews watched out for enemy aircraft. They could track them with radar, pick them out with searchlights and aim the large anti-aircraft guns onto them, but only the men were allowed to fire the guns!" 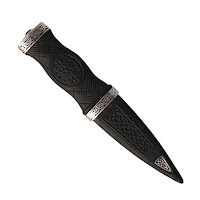 Stanners' superior is a Scot who throws in a Gaelic phrase every now and then. He describes a murder weapon found plunged into the back of the first corpse as "a very ordinary sgian dubh". That sent me off to the internet again. Gaelic for "black knife" the term specifically refers to the kilt knife a Scotsman wears in a sock or tucked into his boot.

"four day flitter" is a person who moved from hotel to hotel before five days were up. In wartime if you stayed in a hotel five days or longer you had to turn over your ration book to the front desk. This is not a casual mention but is tied into the plot. The explanation of a four day flitter (someone who refuses to give up their ration card and leaves to find another room for another four days at a different hotel) leads into a lengthy discussion about ID theft and ID card forgery. The head of the black market operations in the novel, Michael Hanley, is a "four day flitter" and is also thought to have forged an ID card with this fake Hanley alias. 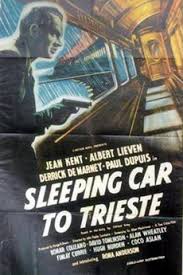 THE AUTHOR: Allan MacKinnon was a Scottish novelist and screenwriter who like his countryman John Buchan was a specialist in the pursuit thriller and espionage adventure novel. Money on the Black, his first novel, reveals his trademarks of an intricate plot and fast pace. While he incorporates elements of the traditional detective novel I'd say it travels heavily into thriller territory. Most of Mackinnon's writing was for the movies. In addition to his many original scripts he adapted numerous novels, stories and radio plays for the screen during his career that lasted from 1939 to 1957. Among his scripts are Sleeping Car to Trieste, She Shall Have Murder (based on the Delano Ames novel), The Saint's Girl Friday (based on Leslie Charteris' Simon Templar story), Circumstantial Evidence, House of Blackmail and The Hornet's Nest.

EASY TO FIND? This one is pretty scarce, but that should come as no surprise. Originally published in the UK as Nine Days' Murder (1945), in France as Le dernier whisky, and under the title reviewed here in the US only a handful of each edition are currently offered for sale at various bookselling sites. My copy is the US Doubleday Crime Club edition, apparently the most common, with the striking surrealistic dust jacket by artist Vera Bock, a frequent Crime Club DJ illustrator. There was also a reprint for the US based Unicorn Mystery Book Club, a four-in-one volume with three other mysteries by Patricia Wentworth, H.R. Hays and Don Cameron. Checking with libraries may be helpful with this title.
Posted by J F Norris at 10:32 AM