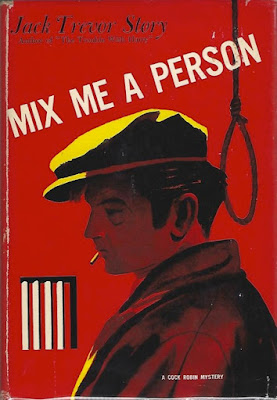 THE STORY: Wannabe musician Harry Jukes is desperate to impress shallow Mona who is too easily impressed by expensive sports cars and movie star glamor. She dares him to steal a Bentley Continental for her. So he does. Little does he know he has stolen a Bentley that belongs to an IRA terrorist. On the same road Harry is driving the owner of that car is sitting next to another IRA member who is driving a truck filled with stolen guns. Harry has an accident in the Bentley, tries to fix a flat tire with the assistance of a passing cop. When they discover they are lacking the right kind of wrench to remove the unusual wheel the cop flags down the first truck he sees. Guess who’s in the truck? Mayhem follows, the cop is shot and Harry manages to run off with the gun that killed the policeman. Soon he’s on trial for the cop’s murder and no one seems to believe his outrageous story filled with alarming coincidences. No one but Dr. Ann Dyson, a psychiatrist of great insight, deep empathy and sheer guts. Dr. Dyson is determined to clear Harry’s name, find all the evidence to prove Harry’s story true and save him from the executioner’s rope.

THE CHARACTERS: Mix Me A Person (1959) is a blend of the inverted detective novel, a juvenile delinquent novel, and a gangster thriller. The odd title is an allusion to a passing slight about the profession of psychiatry, in particular Dr. Dyson’s personal approach of listening intently to her client’s life stories and gleaning from their anecdotes telling behaviors and reactions that help her understand them. She builds a close bond to Harry rather quickly but is more successful with his small circle of friends who hang out a local cafe/jukebox joint. They all sport odd nicknames like Socko, Gravy, and Dirty Neck, which she uses familiarly to help build up camaraderie. Only later when they've helped her out of scrape with the IRA ruffians does she bother to ask about their real names and how their got their unusual monikers. Story does a good job of making these young people extremely likeable in their refusal to believe in a generation gap. That Dr. Dyson is in her early thirties, very attractive and given to wearing close fitting, eye catching outfits might also have a lot to do with her getting Harry's male friends to act as her cohorts in crime solving. But it's mostly due to Anne's being the only adult who believes in Harry's innocence that gains her such a loyal group of allies among the cafe crowd. Their hip lingo and British teen slang add a nice touch of retro verisimilitude to the plot. 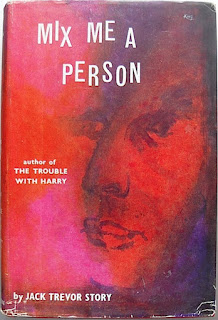 In one of the more strikingly poignant moments Mona joins the gang of do-gooders in a way only she would think suitable. Mona is starstruck, living in a daydream world of idolizing screen stars and the fantasy lives they portray in the countless movies she is always talking about. She's also completely delusional in thinking that she will someday have a career in movies and does everything she can imagine in order to fulfill her dream as soon as possible. Through a combination of feminine wile and luck she uncovers a crucial piece of evidence -- a gun Harry once owned then traded away -- by seducing the young man who got the gun from Harry. Once she has the gun in her possession Mona dreams up a ludicrously melodramatic scene right out of the kinds of movies she is obsessed with. She plans to call the police, tell them she has the gun all the time staging a fake suicide attempt involving the coin operated gas heater in her bedsit apartment, figuring the suicide attempt will speed the police to her home and they can get the gun promptly. She spends half the day making herself up, positioning herself in a suitable dramatic pose, just before inserting the few shillings into the gas meter. Never once thinking that extra touches of reality may lead to a fatal accident rather than an act of heroism.

The IRA baddies are a nasty lot, quick to catch on to Anne's questionable interest in Mr. Taplow, the owner of the stolen Bentley, who runs a fruit distribution company. Anne pries into his business operation alarming the hot tempered Irish who think nothing of imprisoning Anne in a walk-in freezer and setting up other death traps. Taplow may not be fully cooperating but he recognizes that to endanger Dr. Dyson's life or foolishly kill her would be tantamount to admitting guilt in the policeman's death. This disagreement in how to deal with Dr. Dyson's prying questions leads to the nail-bitingly suspenseful final chapters with Taplow turning the tables on his IRA associates in an last ditch attempt to do good. 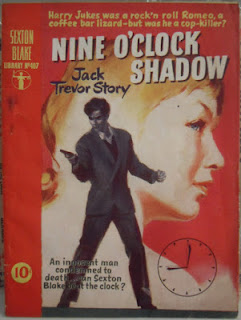 THE PREVIOUS VERSION: In addition to his own novels Jack Trevor Story was one of the many writers contributing thrillers to the Sexton Blake series. His sixth novel for Amalgamated Press (he wrote about twenty books for the series) was Nine O'Clock Shadow about young Harry Jukes who "borrows a flash car to impress a girl. Unfortunately, the car belongs to an IRA arms smuggler and Harry is implicated in the murder of a policeman." Yes, indeed! It's the very same story as Mix Me A Person. When Story rewrote that plot he substituted pulp hero Sexton Blake for the attractive Dr. Anne Dyson, psychiatrist turned detective. The title of the first version of this story refers to the "shadow of the gallows" figuratively looming ominously in the background as Blake races against the clock to prove Jukes' innocence in the same time constrained manner as Dr. Dyson. 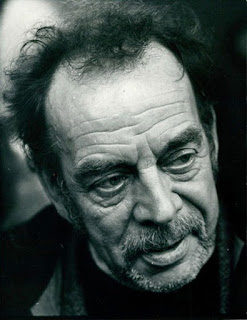 THE AUTHOR: Jack Trevor Story is perhaps best known in the US as the author of The Trouble with Harry (1949) which was adapted for the movies and became Alfred Hitchcock's comic thriller about a dead body that won't stay hidden or buried. In his native England Story is better known for a trilogy of semi-autobiographical comic novels featuring Alfred Argyle and another trio of books about Horace Spurgeon. How he came to write for the Sexton Blake series is one of those "sheer luck" stories that often literally save a writer from a life of poverty. Story wrote about meeting Bill Baker, a former editor at Panther Books, who was going to take over the Sexton Blake series in an essay called "Sexton Blake Saved My Turkey." Great memoir! I suggest you all click on the link and read all about it. In the essay Story says the only Blake novel he and Baker could use as their model was one by Rex Stout. But that's an error of memory. He means Rex Hardinge. Stout never wrote a Sexton Blake novel as all us Yanks know he was strictly about Wolfe and Goodwin. 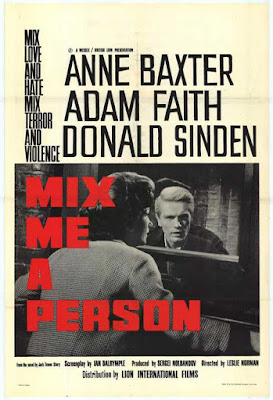 THE MOVIE: In 1962 Mix Me a Person was adapted for the screen by writer Ian Dalrymple and director Leslie Norman. American actress Anne Baxter played Dr. Dyson and pop star and sometime actor Adam Faith co-starred as Harry Jukes. In the novel Harry is a mediocre guitar player, but he's changed to a singer allowing Faith to sing at least two songs based on YouTube clips I found. The strangely sunny title track "Mix Me A Person" was released as the B side to Faith's quasi country record "Don't That Beat All?" Faith also performs -- bizarrely -- a cover of "La Bamba" in one of the many cafe scenes. Check it out here if you want to. He was actually perfectly cast as the naive, pretty boy Harry though his acting is not very memorable. You can watch Faith and Baxter in a prison interview scene at YouTube. Baxter is too old for Dyson as she is described in the book and way past her glamor years, too, to be suitably alluring to Harry's friends. The film is available on DVD from Rare Movies, who impressively will code your copy for the proper region as well as the putting it in correct DVD format.

THE RECORD: I listened to Adam Faith's song "Mix Me a Person." Pleasant and innocuous, but with sentimental lyrics and an upbeat melody completely unfitting for a movie about a young man facing execution. To me it sounds like something Pat Boone would have recorded with an arrangement that oddly reminds me of Gene Pitney's "24 Hours from Tulsa".

EASY TO FIND? There were a couple of reprints of this title, including a movie tie-in paperback edition (Corgi, 1962). The US first edition shown at the top of this post is the most common these days and easy to find (as well as reasonably priced) in the used book market. And I'm sure you might stumble across one of the many UK editions, hardcover or paperback, in any of the bookstalls and shops on the other side of the pond. The book hasn't been reprinted since the 1960s.
Posted by J F Norris at 8:25 PM