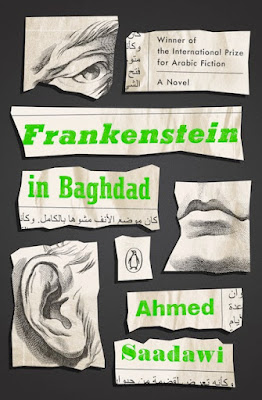 For the first post in my year long salute to "Frankenstein @ 200" I've chosen a brand new book first published in Iran and winner of the International Prize for Arabic Fiction. Saadawi's novel is a phantasmagorical work that incorporates fantasy, Arabic folklore, and wartime horror in a unique retelling of the Frankenstein story. The novel is Saadawi's reaction to the inescapable violence and endless killing of a wartorn city. He envisioned a sort of Nemesis who would haunt the streets of Baghdad seeking out murderers, terrorists and soldiers responsible for innocent victims of war and bombings. In place of Victor Frankenstein we have the junk dealer Hadi who inadvertently creates a Frankenstein monster of sorts when he tries to find missing body parts for a friend's blown-up corpse. When Hadi travels to the Baghdad morgue he discovers that no attempt has been made to separate or identify any stray limbs and that they have been dumped together according to body part. The morgue attendant tells Hadi, "Just take any arm. What does it matter?" In wartime Baghdad corpses and severed limbs have become so commonplace they are just like so much junk to be piled into a bin and disposed of as quickly as possible.

Saadawi has found a way to take the basic concept of Frankenstein's thirst for god-like power and subvert it. The Creature in his novel is not as soulless as Shelley's monster. It is not without identity nor is it without purpose. Just the opposite, in fact, as Saadawi makes the perceptive point that being composed of so many body parts it is a collective of multiple identities. As for the soul there is an entire chapter devoted to the bodyless soul of a hotel guard who is the victim of a terrorist's suicide bombing attack. For the length of the chapter he travels looking for his body while Saadawi reminds us of the Muslim religious belief that without a body the soul will never be able to enter Heaven.

The guard discovers the body Hadi has created and settles there thus reanimating the corpse and simultaneously reawakening the many "memories" of the violent ends each separate body part endured. The soul of the hotel guard acts as a spirit of vengeance and the body sets out to find those responsible for its various destructions. As each "memory" succeeds in its act of retribution the body part dissolves making it necessary to find a replacement. What more perfect metaphor could be imagined for the relentless cycle of pointless death during wartime?

Sounds utterly gruesome, right? Why read something so truly horrifying and gut wrenching? And yet it's a masterful satire, tinged with biting humor and powerfully moving sequences, never once is there the temptation to sentimentalize the story with grief stricken longing for the horribly butchered victims of war. One character combats her grief for her missing soldier son with an untold capacity for the hope of his return. It is this missing son's  nose that Hadi finds and attaches to the creature Saadawi has dubbed the Whatsitsname (or perhaps the term is translator Jonathan Wright's invention). Each chapter focusses on one of the many characters in the novel with a trio of them -- Mahmoud, one of several journalists, Hadi, and the Whatsitsname -- taking center stage in the weaving narrative. The most original aspects of the novel are the incorporation of fantasy and supernatural. Saadawi cleverly manages to draw on the rich history of Arabic folklore familiarly known to Western readers from the 1001 Nights.

The novel opens with a sort of Iranian X Files division blandly called by the drab and bureaucratic name The Tracking and Pursuit Department, headed by an egotistical and nearly incompetent Brigadier Majid who is surrounded by muscular young male servants who trot out at a moment's whim to serve tea in his offices. Slowly we learn that the Tracking and Pursuit department is primarily in charge of preventing terrorist attacks by predicting possible violent plots and ending them before they ever occur. They employ not only soldiers but a complex network of astrologers, parapsychologists, mediums, soothsayers, and "people who can communicate with spirits and djinns." Mahmoud interviews the Brigadier about the department trying his best to understand why the army would call for help from what he thinks are a bunch of crackpots. Majid replies "It's work. You don't know how many weird stories we have to deal with. The aim is to get more control, to provide information about the sources of violence and incitement to hatred and to prevent a civil war." In one chapter the reader learns that even among these specialists in the occult there is a war for power. Several sorcerers manage to locate the creature known as the Whatsitsname and using their varied talents in spell casting are trying to control the creature in order to eliminate each other so each man can become the chief sorcerer. As the senior astrologer later says to Brigadier Majid: "What's the point of predicting where a crime is going to happen when you can wipe out the criminal before he becomes one?"

Ultimately, it is the creature itself with its multiple identities, its amassed experience and perceptions of the world "remembered" through each body part who "emerges from a daydream" to deliver the true horror of the relentless violence: "There are no innocents who are completely innocent or criminals who are completely criminal." He realizes the most telling aspect that will undermine his mission " [that] every criminal he had killed was also a victim." His rampage is pointless and he longs to be destroyed.  Yet even as the One Who Has No Name realizes his futility he becomes an omnipresent threat.  He is seen everywhere and becomes everything.  Fear spreads and the Whatitsname is called a Shiite extremist, an agent of foreign powers, an enemy of anyone who has an enemy. Even the Americans working to preserve peace blame the creature on an ingenious man trying to subvert their case. Such is the chaos of life in wartime and such is the power of fear.

As in Shelley's Frankenstein a resolution of sorts comes about only with an ironic punishment of the creature's inventor. Only when a face can be put on the creature rather than a name can the hunt end and a criminal be caught. But recalling the creature's observation we are forced to ask ourselves was the true guilty party found and captured? Saadawi offers us no pat answers here. There is no real peace either.  There is only resignation and surrender as the violence subsides temporarily only to make way for more.
Posted by J F Norris at 10:41 AM