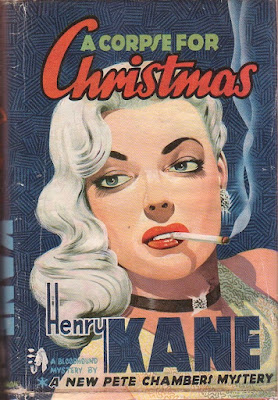 THE STORY: Peter Chambers is hired by Genie Tiny, a fellow private eye, to find Sheldon Talbot and Ok a deal she and her employer Barney Bernandino set up with Talbot. Chambers knows Talbot is a scientist who supposedly died in a truck accident a while ago. Genie assures him that Talbot is alive and waiting for her at a specific address. She can't go because she's in jail awaiting traffic court appearance on a DUI. It's all trumped up, she claims, but she's stuck until she can plead her case. Pete agrees to act as her proxy. When he arrives at the agreed upon location he finds Talbot dead and an 18 year old girl (who looks much older) standing over the body holding a gun. Three more women, all former wives of Talbot, figure into the murder case. And there will be more than one corpse at Christmas before Chambers gets to the bottom of the mess.

QUOTES: The only reason to read Henry Kane is for his unusual style. When anyone thinks of private eye books this is the kind of writing they expect. Quirky use of metaphor, wiseguy dialogue, and that kind of rambling narrative peppered with good ol' boy slang, a faint whiff of world weary misanthropy and a generous dose of chauvinism mixed with veiled misogyny. Next to Robert Leslie Bellem, another oddball stylist who seemed to be parodying the entire genre in his pulp stories, Kane was king of "private eye speak". Kane also has an unnerving hyper-real way of writing dialogue that makes him stand out from the rest of his private eye colleagues. Much of what I read in A Corpse at Christmas (1951) reminded me of David Mamet's terse, realistic dialogue in his early plays. Get an eyeful of this sample: 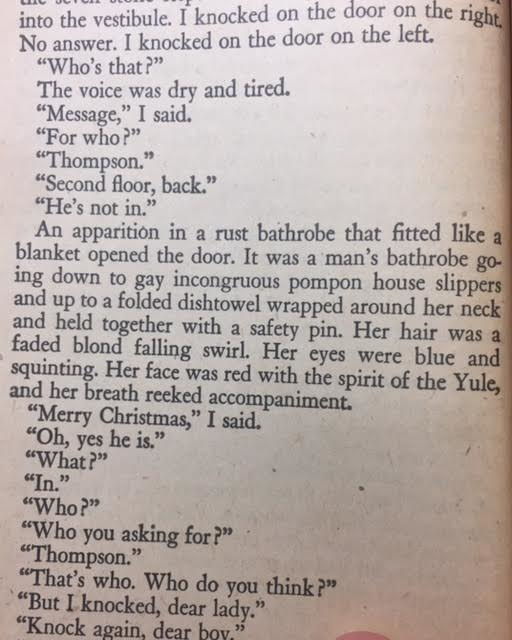 The book is filled with this kind of Q&A banter. And I like his frequent epigrammatic lines and metaphoric wordplay, too.

There is nothing to divest a party more quickly of its gay constituents than a dearth of the potables.

Have you ever seen a crematorium? It's a place that sort of sifts for itself. Or didn't you ash? Puns from the private eye, ear, nose and throat. That's what happens when you're scared.

She was built in luscious bunches, beautifully spaced, marvelously hyphenated.

His face looked like the top of lemon meringue flavored with jaundice.

Lorimar Boulevard was a boulevard strictly under the false license of poetic pretense. It was a narrow, rutty road with more bumps than a grind-girl going crazy in early morning burlesque. 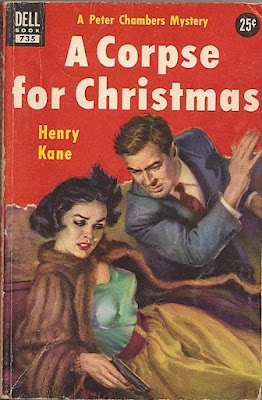 But this paragraph perfectly encapsulates the Pete Chambers books and Kane's worldview:

Somewhere along the stumble to maturity, I had picked up a prohibition against eighteen-year-olds. I am not saying how. Even a private Richard with literary leanings seals up certain sections of the book. Eighteen is delectable, unpredictable, modest, bawdy, constant, fickle, shy, bold--wrapped together and flung at you all at once: trouble. Eighteen is wonderful. I rear up at eighteen like a racehorse against a flying sheet of newspaper. I shy off.

THE AUTHOR: Henry Kane started out as a lawyer. He turned to writing for the pulps in mid-career in the 1940s, wrote a novel called A Halo For Nobody (1947) which introduced Pete Chambers to the world of private richards, and eventually churned out over 60 books. About half of his output features Chambers. He also created a woman private eye named Marla Trent and an ex-cop turned PI named MacGregor. If you want to learn more about Kane you can read a brief overview of his work and life at Thrilling Detective or a bio at Prologue Books, who have reprinted many of his books in digital editions. The most entertaining glimpse of Kane in his later life comes from the memory bank of Lawrence Block who wrote a fascinating piece about Kane for Mystery Scene magazine.

THINGS I LEARNED: There was a running gag about people greeting each other with "White Christmas" rather than saying Hi or Hello. The setting of Christmas adds nothing to the plot nor does the constant snowfall other than to allow Kane a chance to employ this odd way of having characters greet one another. "White Christmas" they say almost as an observation and sometimes Chambers says "Same to you" in reply. Strange.

EASY TO FIND? As mentioned above Prologue Books, a digital reprint outfit, has reissued several of Henry Kane's crime novels as eBooks. But for this book they used one of the two retitled editions and call their reprint Homicide at Yuletide. Apparently it was reissued in the 1966 with that title to help distinguish it from a book by Carter Brown also called A Corpse for Christmas. If you want one of the books with the original title you can also troll the bookselling websites of this shopping mall we call the internet or hunt for a copy in your local thrift store, used bookstore or flea market. There are plenty of copies out there I promise you. At least three paperback editions (one retitled Homicide at Yuletide, another published as A Deadly Doll) and two hardcover editions are out there for sale that I uncovered. As for me I'll be reading more of Kane in the coming months because he's one of the most entertaining "stylists" in the private eye genre I've ever been lucky enough to stumble upon. Stay tuned!
Posted by J F Norris at 11:09 AM