FFB: Within the Maze - Ellen Wood 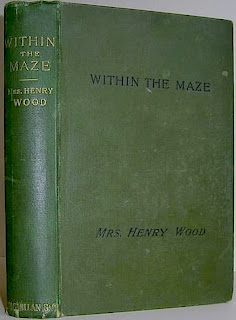 When the discussion of domestic suspense comes up no one ever thinks of Ellen Wood, or Mrs. Henry Wood as she was known back in her heyday as one of the most prolific and perhaps the leading Victorian bestseller writer. Why is that? Granted her books may be incredibly old-fashioned, but they are surprisingly readable. Any brave reader willing to dive into one of her massive tomes (most of them were released in three volumes during her lifetime) cannot fail to draw comparison to the modern work of Margaret Millar, Ursula Curtiss, Charlotte Armstrong, and Dorothy Salisbury Davis. Wood practically invented the subgenre. Instead of her books being seen as an offshoot of the more criminally minded Victorian sensation novels of Collins, Braddon and Charles Reade she gets clumped together with them. The majority of her novels have nothing to do with crime and are, in fact, domestic melodramas rich with scandalous incident. Victorian soap operas might be a unkind label, but sums them up rather nicely especially considering how soap operas have evolved into tales of passive aggressive schemers only happy when causing unhappiness to others. When Wood does turn her mind to criminal acts, they almost always result in unintentional cover-ups. Her men and women are determined to preserve family reputation and individual honor at all costs. There may a suspicious suicide, bigamy, theft, or even a murder or two, but the story is always centered on the aftermath of the crime teeming with misunderstanding, gossiping busybodies unnecessarily complicating otherwise innocuous events, stubborn refusal to speak without ambiguity, and characters suffering silently in their pain, guilt and shame while tenaciously clinging to what little dignity they have left and resolute in their stance not to expose their secrets.

Within the Maze (1872) is essentially the story of two brothers and their wives and the complex interweaving of family secrets that can be traced back to a single foolish and criminal act. The older brother Adam Andinnian has been sent to prison for shooting a man who was stalking and paying lecherous advances towards Rose Turner whom Adam is secretly married to. Karl Andinnian, the younger brother is engaged to marry Lucy Cleeves but the marriage is not forthcoming because Karl is not seen as suitable in the eyes of Lucy's snobbish parents. Mrs. Andinnian who has always favored Adam over Karl is heartbroken when Adam is sentenced to hard labor for life in a penal colony on a remote British island. She cannot allow him to suffer there, nor can she live without him by her side. And so Mrs. Andinnian schemes with her servant whose husband is a guard at the prison to allow an escape to take place. The prison escape fails miserably, however, and ends in a violent shootout. Adam, another prisoner, and the guard all perish. One of the bodies is never recovered and the man is presumed to have drowned when the boat was attacked by prison officials and police. With Adam now dead and buried Karl has inherited the family title as well as the Andinnian fortune left to them by their grandfather Sir Joseph. The marriage between Karl and Lucy can now take place. All of this happens within the first fifty pages. You think that's involved? I left out a lot of detail and only highlighted the basics. But there's more to come, of course, in this 425 page novel. Karl and Lucy are not going to have a very happy first year as newlyweds. 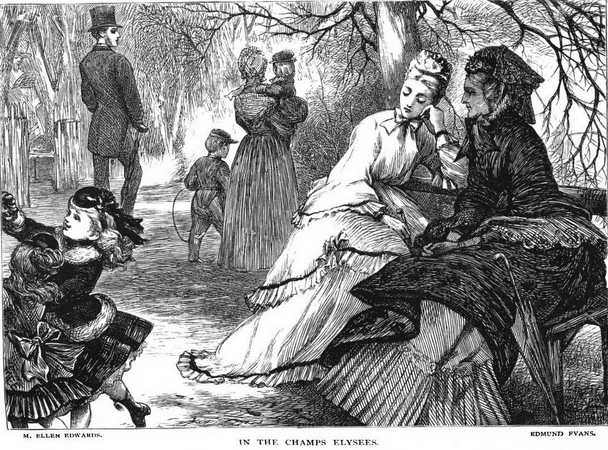 A religious zealot named Theresa Blake who has her nose in everyone's private affairs becomes a lodger in the home of Karl and Lucy. Miss Blake quickly develops a morbid interest in Sir Karl's frequent visits to a house known aptly as "The Maze" as it is sheltered by a hedge maze. The sole occupant of "The Maze" is the reclusive Mrs. Grey who according to rumor has a husband who lives and does business in London though he has never been seen and very rarely ever visits his wife. Miss Blake being a sanctimonious religious hypocrite obsessed with immorality immediately jumps to the conclusion that Karl and Mrs. Grey are engaged in an adulterous affair. And of course the first person she tells is Lucy. The remainder of the book consists in Karl and Lucy confronting each other about their secrets, a complete misunderstanding of what each other is talking about, and Lucy's descent into a private misery wavering in and out of deep love and devotion to and utter distrust of her husband. Miss Blake complicates matters by her constant eavesdropping, spying and coincidentally being in the same place as Karl at the most inopportune moments. Karl, on the other hand, believes that Lucy knows the true secret of the occupants of "The Maze" and cannot understand why she is making herself more and more depressed and physically ill over something that he is dealing with as best as he can.

This is in fact one of Wood's few genuine crime novels. Eventually, the police get involved when Karl and Mrs Grey inadvertently stumble upon the possibility of another escaped prisoner guilty of forgery and financial chicanery living in the quiet little village of Foxwood. The story then gets doubly complicated with the police misinterpreting Karl's interest in the forger and the appearance of a mysterious man who seems to have vanished in The Maze. Some of those who witnessed his appearance believe him to be a ghost. Detective Burtenshaw is assigned to watch the home. His persistent efforts uncover the presence of a man hiding in The Maze. He is convinced it is the escaped forger Philip Slater, but Karl thinks the police are after "Mr. Grey" and fears his life will fall apart if the identities of Mr. and Mrs. Grey are ever made public, especially by the police. Karl begins to visit The Maze more and more frequently employing clever subterfuge with the help of Mrs. Grey and her servant Ann Hopley to prevent the secret being known. Meanwhile, Miss Blake continues to interfere and gossip and Lucy continues to languish in fear, depression and misguided jealousy making herself more and more ill. Yet in the end all will turn out for the best with some stunning plot twists.

You may have guessed the secret of "The Maze" yourself. Remember that missing body that was never recovered after the failed prison break? Who do think it really was? An unrecovered body lost at sea (any missing dead body for that matter) nearly always signals someone is really alive as we all know from reading hundreds of mystery novels. And who do you think "Mrs. Grey" really is? If you aren't clever enough to have discerned the obvious, never fear. Ellen Wood tells you almost immediately in one of her many direct addresses as the omniscient narrator who sees all, knows all, and cannot help but tell all in a sometimes annoying patronizing tone.

The inability for people to communicate properly with one another and harboring their secrets is at the heart of this book very much about the mind and spirit. This theme is brought up as early as the first section when Karl attempts to get his mother to confess her involvement of the prison escape "[Mrs. Andinnian] had always been a strangely independent, secretive woman: and such women, given to act with the daring independence of man, but not possessing man's freedom, may at time drift into troubled seas." The words dishonor and disgrace occur throughout the novel. The characters are fearful of tarnished reputations, afraid of how they will be viewed by others if they ever open up with total candor. Clinging to these secrets not only leads to depression but it makes them physically ill. Lucy, Mrs. Grey, Adam, and Margaret Sumnor all succumb to what amount to psychosomatic ailments. Some of them are chronic, some of them prove fatal. All because no one is willing to speak the truth. 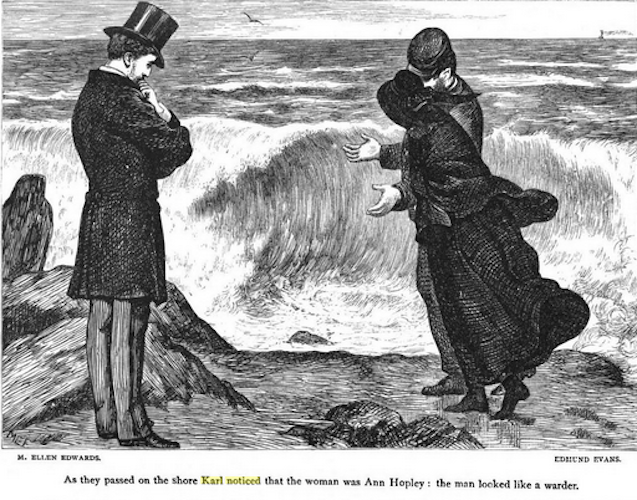 Wood employs the metaphor of the broken heart both figuratively and literally. Lucy more than any other character desires to make her heart whole again, but it is her stubborn refusal to discuss her real troubles and fears with her husband, who she supposedly unconditionally loves, that leads to her dangerous decline in mind and body. She wants to believe he is innocent of philandering, but Miss Blake's malicious gossip she takes as gospel truth. When Mrs. Grey gives birth to a child and Miss Blake delivers that awful blow Lucy nearly dies on the spot. But there is a patient spiritual masochism at play here as well. It is almost as if Lucy, so blithe and optimistic and deeply in love in the first portion of the book, truly wants to suffer and wants to be the wronged woman more than she wants her marriage repaired. When all seems lost Lucy in desperation turns to her well-meaning friend Margaret Sumnor. The words of wisdom Lucy receives are ill advised though they perfectly embody the Victorian mindset: "Whatever your cross may be, my dear -- and I cannot doubt that it is a very sharp and heavy one -- take it up as bravely as you can, and bear it. No cross, no crown." Knowing that she has no real cross to bear at all, that her marriage was never was in disrepair, makes her plight all the more bittersweet, if not maddening. What is unspoken and held close proves time and again to be detrimental to everyone. Secrets can indeed kill in the world Ellen Wood creates. What is more indicative of domestic suspense than these stories in which people will not confide in anyone or too late choose the wrong person as their confessors? Here are people so entrenched in misery of their own making and mired in their inability to "see clearly" so that they are not only at the mercy of interlopers and malicious exploiters but they become victims of their own fantasies.

Within the Maze, may be one of Wood's lesser known novels today, but it was the fourth most popular of her books in terms of sales with over 150,000 copies sold between 1872, when it first appeared as a serial in Argosy, and 1900, one of its many  reprint years. That's nowhere near the 520,000 copies sold in the same time range of her famous potboiler East Lynne, the popularity of which grew evermore with its several stage adaptations. Yet still Within the Maze is notable for having remained in print for thirty plus consecutive years and continuing to be reprinted long after the author had died. With that kind of decades long popularity surely it is time to take notice of why Ellen Wood's books have struck such a resonant chord with readers of all types throughout history. There are indeed many clunkers in her stupendously prolific career ranging from dreary diatribes on the evils of drink to ponderous sentimental tales of women dying slow and languorous deaths, but when she was writing a book like Within the Maze all her talent in suspenseful storytelling kicked into high gear. She is long overdue for being recognized for her contributions to a subgenre still popular today.
Posted by J F Norris at 11:14 AM