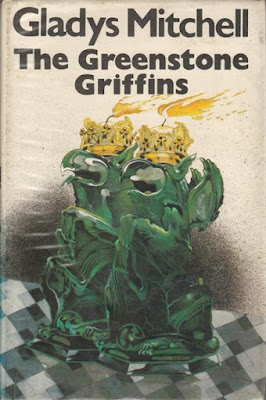 THE STORY: A pair of antique candle holders in the form of griffins become an obsession for Jessica Denefield, a young teacher living in rural Longwater Sedge. The Greenstone Griffins (1983), as they are known, carry with them an apparent curse; for anyone who owns them violence and destruction follow. The griffins have purportedly been responsible for an accidental fire in a summerhouse, a shooting death, and arson at an antique shop. In the final damning bit of proof that the objects are cursed one of the griffins is used as a blunt instrument in the murder of a mysterious fortune teller named Madame Setier. Jessica is compelled to discover the secret of the griffins and why so much violence is attached to their ownership. She literally stumbles upon the battered body of Madame Setier and becomes the prime suspect in her murder. When Mrs. Bradley happens to visit the town and meets Jessica in order to gain permission in interviewing the schoolchildren for her research into nomadic travelers she learns of the griffins, their sinister history, and the murder. A pattern of violence begins to emerge all of it tied to a crime in the past. Mrs. Bradley's determination to clear Jessica's name leads to the uncovering of family secrets, blackmail and murderous revenge.

THE CHARACTERS: I have a suspicion that this book was written earlier in Mitchell's career and was set aside. The atmosphere of the book is far removed from a modern 1983 and feels much more like the late 1950s. Jessica Denefield loses her teaching job merely because she stumbles upon a murder is the only witness and is subsequently paid close attention to by police. She eventually becomes the prime suspect because Jessica also made the foolish decision to walk into the house as the door was unlocked. To me this is just trespassing, but the police call it breaking and entering. In any case, the way she is treated by the school administration seems absurdly old-fashioned for the 1980s. However, it is set in rural England so it's very possible that this is a reflection of a countrified worldview where people in authority maintain deeply conservative opinions and shudder at any thought of the most minor scandal.

And yet... After Mrs. Bradley criticizes the Education Officer for the way he has treated Jessica he says "Ah, you are a feminist!" intending it as an insult. Never letting the meekest slight affect her the elderly psychiatrist snaps back: "If most of life's ironies and jests were directed against men, I would be on their side, but we must not waste your time and mine on fruitless discussion of Nature's ruthless disregard of the importance of the balance of powers between the sexes--at least as human beings are concerned. I believe the female spider is more fortunate." Later on she attacks a woman for holding antiquated ideas and rebukes her by stating her heartfelt opinion that men and woman have always been equal, that the inequality was an invention of men in power. Granted both Mitchell and her detective character have always been vocal about equality for men and women, but those few instances are the only time I felt like the book rang true for its publication date.

In other ways the book is a real throwback to Mitchell's mysteries of the early 1930s and 1940s.  All of the regulars appear in this book including her loyal servants Celestine, Henri and George her indefatigable chauffeur. George plays a prominent role in this book and even goes undercover to help Dame Beatrice get some inside dope from a scalawag who frequents the "Cow and Lasher," a local pub. There is a new secretary who is a replacement for Laura Menzies who left Mrs. Bradley, got married, and had several children sometime in the 1950s or 1960s. This new secretary I liked a lot. Her name is Miss Cummings and I've never encountered her in the Gladys Mitchell books prior to reading The Greenstone Griffins. She may be in other books, but since I've primarily read Mitchell's early to mid career books rather than her books published between 1970 and 1983 I can't tell you when Miss Cummings first pops up as one of the many employees at Stone House. She's full of wise words, has a passion for dropping literary allusions into everyday conversation, and is deeply concerned for Mrs. Bradley's safety. She thinks her boss takes too many risks for an elderly woman which delights and amuses ol' Mrs. Croc to no end.

QUOTES:  Education Officer: "Don't hit a man when he's down!"
Mrs. B: "I should not stoop to such a proceeding. When a Man is down, that is the time to kick his head in, don't you think? --and that action does not involve any stooping at all, as your committee appears to have realised in the case of Jessica Denefield."

"There are such things as wheels within wheels, Detective Superintendent,"
"You speak in riddles, ma'am."
"Maybe it is the fault of my profession. The Delphic Oracle, if you remember, suffered the same disability." 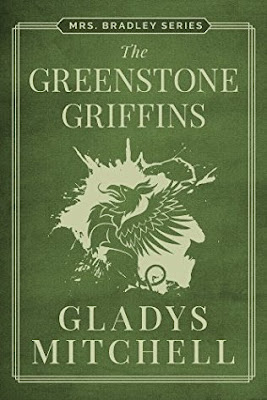 THINGS I LEARNED: Mitchell is a master at replicating the country dialects of her native land. This book comes alive with all sorts of rural slang amid the dialect heavy dialogue. Mumping is slang for begging. Apparently, it is also in use among police and the working class to mean selling used goods in lieu of begging. Bumby hole is one of the many alternative terms for an outhouse or a public toilet. I never heard that one! Not even in the thousands of British movies I've seen over the years.

EASY TO FIND? All of Gladys Mitchells books are available in digital versions from that giant e-tailer who created the Kindle. Knock yourselves out 21st century book fans! Those of use who like to turn real paper pages with our fingers rather than swiping a screen are less lucky. I found only five copies of The Greenstone Griffins for sale and all of them are priced ridiculously high and will probably stay on their shelves until each seller goes out of business. The book was never reprinted in paperback and exists only in the UK hardcover edition making it all the more scarce. If you happen to have a spare two grand in pocket change you can treat yourself to something unique in book collecting. Mitchell wrote all of her manuscripts out in longhand and sent them out to professional typists before submitting them to her publisher. There is a bookseller who managed to snag the original holograph of The Greenstone Griffins and wants nearly $2600 for it. Do you hear strains of "The Impossible Dream" playing in the background?
Posted by J F Norris at 11:35 AM