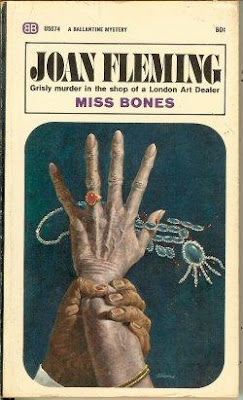 THE STORY: Thomas Melsonby accepts a job at Walpurgis, a curio shop specializing in antique paintings, where he will be their art restorer and picture framer. But he has the feeling that something fishy is going on at the antique shop. First indications are the furtive figures running in and out of the shop late at night, the less than reputable people who hang out around the store, and the fact that the owner is unwilling to sell certain paintings in the place. Mr. Walpurgis also enjoys telling Thomas odd anecdotes about his past life, including the story of why he assumed the name of the previous owner. It all makes for an unsettling business relationship especially since Thomas is living above the shop and can't escape the eccentric, demanding neighbor Lady Goole who has a few stories to tell about Walpurgis. When Mr. Walpurgis disappears one night without a word to anyone and does not return for several days Thomas turns amateur sleuth in an attempt to find out where the shop owner went and why. Stolen goods, false identities and murder all figure into this suspenseful and gruesome story.

THE CHARACTERS: Miss Bones (1959) grabs your attention from its snappy opening and never lets go thanks to the intriguing and often oddball characters Joan Fleming has created. Thomas makes for an affable leading man. When he is quickly suspected of doing in Mr. Walpurgis we never once suspect him of any wrong doing and want him to clear his name with almost as much desperation as he shows. There are several mysteries to solve about the strange people who frequent the store. There is the identity of young man who visits the shop late at night. He is often seen in company of an attractive young lady who Thomas first sees in a restaurant devouring a pork chop off the bone and gives her the nickname Miss Bones. As much as she interests Thomas this young lady is only a minor character. The nickname and title of the novel will eventually prove to belong more fittingly to someone completely different and much more dangerous. Walpurgis has a silent business partner named Wood-Bevington who is just as mysterious as the antique shop owner. Thomas tries to track down Wood-Bevington thinking that he might have something to do with Walpurgis' vanishing and never quite manages to find the actual man who proves to be as allusive as Lewis Carroll's mythical Snark.

The entire story has a surreal atmosphere to it in that no one ever seems to be who they say they are. Miss Bones, like many of these "wrong man" suspense novels, takes on a sinister paranoid air that infects all of the proceedings. Thomas begins to fear his neighbors, distrust most of the people he encounters and interviews. Even when he is arrested and thrown in jail for a crime he obviously did not commit he cannot help but wonder why he is visited by a Good Samaritan in the guise of Rodney Lurch, Q.C., a retired barrister who seems to mean well but may have an alternative agenda for freeing Thomas.

QUOTES: "A woman's jewels are as much a part of her wearing apparel, as say," Inspector Feenix had been about to say "panties" but changed it to "costumes."

Since he had stepped from the cab and stood outside the shop of Walpurgis, he seemed to have entered a world a good deal more fantastic than the world he had left; a state of robbery, forgery, murder and mystery where respectable solicitors absconded overnight, young ladies were dressed like whores of the twenties, bridge clubs hostesses were fuddled with drink and his great-grandmother was taking art lessons.

On the whole, Thomas thought as he drove away, we Anglo-Saxons are an astonishingly incurious nation. 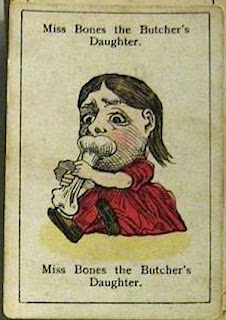 THINGS I LEARNED: The nickname Thomas gives the young lady previously mentioned comes from a card game called Happy Families. I'd never heard of it, and needed to understand what it all meant. After researching it on an antique board and card game website I learned that it's similar to the US children's game Old Maid. The original deck was illustrated by John Tenniel (known best for the drawings found in nearly every edition of Alice in Wonderland) who was commissioned by Jaques of London, the famed English game manufacturer who gave us Snakes and Ladders (aka Chutes and Ladders in the US), Snap and Tiddley-Winks. I found a photo of the original Miss Bones card in an antique deck (shown at right). You can see why she would come to mind when Thomas Melsonby saw the young lady eating her pork chop so ravenously.

The WW2 bombing of Sloane Square plays a major part in the denouement of this intriguing little murder mystery. I read about how eyewitnesses were horrified by what they saw. Fleming goes out of her way to drive home the horror of the London bombings by describing how body parts and people were found in the most outrageous places. I'll spare you any quotes of those grisly passages.

There was this line that also sent me a-Googling for answers: "With an arm around her ample waist, Thomas helped her up the stairs feeling like a Pickford's man, single-handed with a grand piano." I guessed Pickford's to be a moving company and I was right. They are one of the oldest moving, storage and removal companies in the UK. Their website traces their history back to the 17th century when in 1646 Thomas Pickford, one of the many road repair Pickfords, decided to make extra income by charging to take supplies back and forth on the roads they were working on. By the 19th century Pickfords was transporting goods via water as well as by road and had constructed their own canal system. More about their fascinating history on can be found on this page of the Pickfords website. 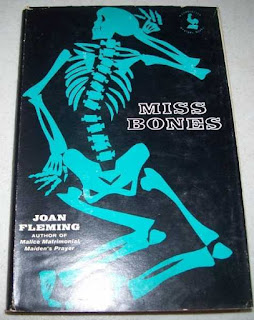 1959 CULTURE: There were some neat bits about 1959 culture throughout the book. The ugly shadow of WW2 hangs ominously over the story with the anecdotes of the Sloane Square bombing already mentioned. Several passages on clothing and dining out added to the verisimilitude. But the best section was when Thomas visits Coffin Joe's Coffee Bar when Fleming turns her satiric pen to describing the women and the general habits of the poseur clientele who frequent the café. "...customers drank coffee sitting at tales shaped like coffins and candle lit. The décor was designed for despair and the customers sat about as though taking an interval from keening. Some of the females astonished him but he had now become familiar with the new look in young women and had got over his initial feeling of revulsion." This is a reference to his earlier encounters with "Miss Bones" who favors heavy eye make-up, oddly pink dyed hair, and a haphazard wardrobe style that mixes glamor and penury.

Another section about how one character grew up in a family who made their living in the butcher trade is equally fascinating. It also provides the reader with some of the final clues in solving the mystery of who killed who.

EASY TO FIND? Miss Bones was published in both the US and UK and was reprinted in both countries several times. So you have quite a variety of editions to choose from in both hardcover and paperback. I found three US editions and four UK editions. In the US I run across Joan Fleming's books more often in the Ballantine paperback editions (shown at the top of this post) and they always tend to be priced very cheaply in used book stores and online. Most of Joan Fleming's books were reissued by The Murder Room, the vintage reprint arm of Orion Publishing. Miss Bones is one of the few Fleming books that was reissued in both paperback and digital editions. Both are apparently still available for purchase from the UK amazon site. The digital and paperback editions from The Murder Room can only be bought from the UK site because of the rights issues.
Posted by J F Norris at 11:07 AM