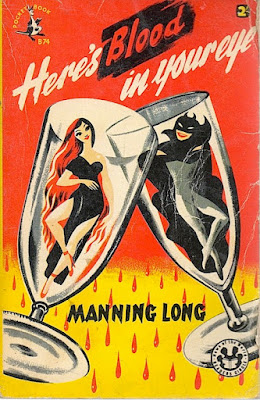 THE STORY: Louise "Liz" Boykin is an artist's model by choice. She's trying hard to become part of the artist community but lives on the fringes of acceptance. She's getting over the recent break up with her old fiance who dumped her and dealing with her uptight, ultra conservative, new fiance who is not much of an improvement. When she is invited to a swank artists' party at the home of married painters and her current employers, Flora and Whitfield Linton, she feels she is finally part of the in crowd. But when her ex-fiance Melchior Thews turns up violently murdered, circumstances continually point to Liz as the prime suspect. With the help of Gordon Parrott, investigator for the Manhattan DA's office, her name is cleared, but not before she is implicated in at least two more deaths.

THE CHARACTERS Here's Blood in Your Eye (1941) is the first of the Liz Parrott books. Knowing this ahead of time spoils a bit of the final chapter where Liz Boykin discovers she will become Liz Parrott. But not much of a spoiler really. Any reader well versed in detective novels jammed packed with romantic subplots and with a leading character who has left a trail of ex-fiances behind her knows that as soon as Liz meets Gordon she has found her third and final fiance-to-be. With this one reading Liz Parrott has become one of my favorite woman amateur sleuths of the 1940s. She's got a contemporary edge to her and she's got so many conflicts within herself she makes for a unique character. It helps that she's got a tough side to her and a wicked sense of humor in her narration. I could easily see these books made into movies with Barbara Stanwyck in the lead even if Liz is supposed to be more ravishingly beautiful. 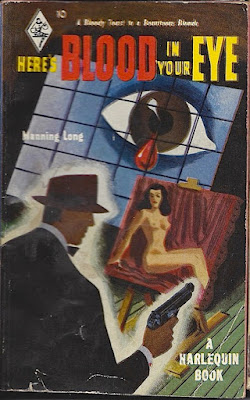 The rest of the cast is made up of equally brash and snobbish characters. They all sport the kinds of names that reek of the kind of urbane Manhattan sophisticates that turn up in mysteries set in NYC. In addition to the preposterously named victim we have Husted Breamer, Liz' laughably priggish current fiance; Clare Edmiston and Barry DuBois, an older woman engaged to an investment broker playboy; Grace Leigh a dangerously wronged woman with blackmail on her mind; Leonard Foxe-Macon who first sees Liz when her gun falls out of her purse in front of Melchior's apartment; and Marcella Payne, a wealthy art patron and one of the many ex-lovers of the murder victim. Even the cops have unusual names like Inspector Langmede who is convinced that Liz has a part in Melchior's death and all the violence that follows in its wake.

INNOVATIONS: The narrative voice of Liz Boykin (soon to be Parrott) is loaded with zingers and fine ironic writing that never descends into the jokey wiseacre stuff of this era. I could fill this entire post with great quotes but it's better to discover them within the context of the story. Her edgy voice has a purpose too because she's trying to find her way in life, sorting out what she wants and who she wants and most importantly of all trying to preserve her identity and personality without having to sacrifice her fiercely independent ways. Getting over her previous engagement which is tinged with a personal shame and a terrible incident that still haunts her provides some conflict to the story as Melchior exploits her past, writes it up in a letter and attempts to blackmail Liz and ruin her chances at marriage with Hue Breamer who disapproves of everything from her posing partially nude in a artist's studio to her owning a cat.

The plot, overflowing with letters used for blackmail purposes and a string of ex-fiances and ex-lovers in Melchior Thews' amorous past, is perhaps a bit too complicated for its own good. The large cast of characters, especially several women who appear to be clones of one another, is often a bit hard to keep track of. Nevertheless Long carries off the telling of this complex story with panache and verve. There are plenty of incidents to keep the plot moving, some decent fair play detection, and a handful of clues dropped early on in the story to point the reader to the somewhat surprising killer.

THE AUTHOR: All I could find out about Manning Long comes from a French Wikipedia article. She was born in Virginia, lived in Washington DC, New York and New Jersey and eventually settled on a farm back in Amherst, Virginia. She was married to Peter Williams, a ceramist and sculptor who created the bust of Edgar Allan Poe used for the MWA Edgar awards.

EASY TO FIND? This title is rather scarce, but later titles in the Liz Parrott series are comparatively common. None have been reprinted in contemporary editions nor did I find any eBooks out there. The first couple of books in the series were published in the US, UK, Canada, and France so finding a copy may be easy for an assiduous book hunter. Here's Blood in Your Eye is one of the earliest Harlequin titles dating back to the days when they published all sorts of genre fiction before turning exclusively to romance novels. Manning Long's first mystery novel is Harlequin #10 first published in a 1948 edition with the suitably lurid cover shown above.

This is late because I'm in Alaska and it took me an entire day to fix my phone so that it would work way up here. Sprint and roaming call headaches. I needed to download a software update that finally I managed to do when we were in a hotel with decent WiFi. Expect more delays over the next ten days.
Posted by J F Norris at 10:09 AM