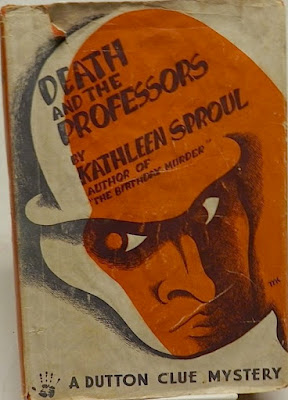 Two rival physics professors die within hours of one another after attending a faculty function at the home of the Dunster College's president in Death and the Professors (1933). Though one death appears to be from natural causes and the other a suicide, the circumstances surrounding each are bizarre and in the case of the suicide so violent that foul play is suspected. Visiting lecturer Richard Van Ryn Wilson, a criminologist and psychologist, is bothered by the uncharacteristic behavior of each professor prior to their deaths and he turns detective to ferret out the truth and expose a ghastly revenge plot.

Once again we find a college campus rife with overflowing passions, unhappy marriages and unrestrained sexuality. Unlike the last book I profiled (The May Day Mystery) for the Tuesday Night Bloggers' discussion of murder in academia this month, the bedhopping is not in the dormitories but in the faculty bedrooms. This is one more addition to the fictional proliferation of unhealthy marriages, jealous husbands, philandering wives and spurned lovers as played out in a university setting. Coincidentally, this is practically the mirror image of Octavus Roy Cohen's book, a sort of Through the Looking Glass tale in which the student and faculty roles are reversed while exactly the same plot devices are used including another secret marriage, another hateful cad and another murder by throat cutting.

The most innovative part of the book is the method by which Jeff Storm is done in. Sproul is one of the first of the American mystery writers of the Golden Age to employ this method, but not the first ever. The earliest instance I know of this particularly diabolical means to kill someone dates back to 1901 in a short story by L. T. Meade and Clifford Halifax that appears in the extremely rare collection Race with the Sun. By the late 1940s, however, it becomes a gimmicky murder method, especially in novels dealing with scientists, experimental labs, and hospitals. 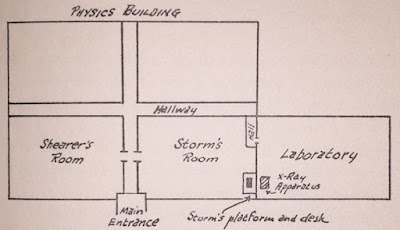 Richard Wilson is not exactly the most competent of detectives nor is the story very well constructed. The clues are discovered by other characters and brought to Wilson's attention whether actually hand delivered to him as in the case of a bloody monogrammed handkerchief found several blocks from the home of Professor Shearer who was thought to have killed himself by slitting his own throat, or through the various gossip mongers who eavesdrop and spy on their neighbors. Gossip plays a large part in the story and is Sproul's attempt to satirize the small-mindedness of a New England town. The portraits of the two old biddies who periodically come to Wilson's door with tales of what they saw and heard are done amusingly and show Sproul's flair for character dialogue. The abundance of  evidence gathered through eavesdropping, however, gets to be irritating by the last third of the book.

That Wilson does not actually discover much of the physical evidence himself is no real concern to Sproul. She has given him an innate talent as a truth seeker: "One of the qualities that had made him so successful as a detective was his remarkable ability to feel psychological subtleties--to feel a personal conviction, not often needing to be altered later, the truth of what he was hearing at any time." She seems to be reflecting a quality of early 20th century fictional detectives that shows the influence of Anthony Berkeley's ideas of what detective fiction ought to be about. The talent for observing human nature and seeing through deception and lies, and for "feeling" or sensing criminal behavior are traits more often found in women detectives like Mrs. Warrender created by the Coles, Maud Silver, and Solange Fontaine whose talent for sensing evil stems more from an undefined supernatural origin than a highly developed psychological insight. Wilson belongs more to the intuitive school of detectives and is more self-doubting than his male counterparts. His reliance on others to provide him with the results he ought to be finding on his own makes him less of a detective hero than his male counterparts in the genre.

The New England setting has its touches of archetypal characters and a bit of a Hawthorne touch in the person of the "village idiot" Gracien Lowell. Here is a woman who lost her son in a horrific accident that ended in a fatal explosion in the physics lab. She descends into a severe depression, leading eventually to madness and becomes a recluse, almost mute, hiding away and allowing her house to fall into disrepair serving as a metaphor for her ever disintegrating mental and emotional state. There was an opportunity here for some eerie touches of Gothic sensibility but Sproul instead chooses to have other characters talk about Gracien Lowell and we get third hand assessments of who she is. Wilson meets Gracien only once and the scene instead of being poignant is almost comic. She has some privileged information that she is reluctant to talk about for she can speak but chooses not to. But by the time she decides to speak up and seek out Wilson it is too late.

My experience with reading academic mystery novels has been almost exclusively with the type of detective novel that uses the milieu of an insular intellectual world to reflect selfishness, opportunism in one's career and the typical rivalries and jealousies that arise out of competing for tenure and positions of influence and power. Sproul explores all of these but with less grace or insight than most writers who choose to satirize ivory tower thinking. The faculty here are petty, spiteful and extremely juvenile. There are two characters who have an assured manner, speak in voices that reflect the kind of arrogance you would expect from academics who think police and outsiders have no understanding of the importance of their work. And it is those characters the reader is most likely to finger as the murderer. The rest of the cast exist as stereotypes of jealous lovers behaving more like horny teenagers as in the case of the woman cheating on her husband who meets her lover in the physics lab for a nightly sexual rendezvous. 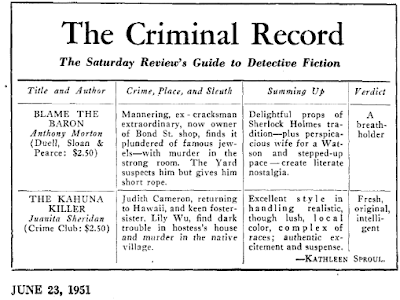 Kathleen Sproul had an interesting career as a writer. She wrote five detective novels in between 1932 and 1946 and then became a staff writer for The Saturday Review. Her book reviews  and nonfiction articles appeared regularly throughout the 1950s, many of her essays were cover stories. But her love for the detective novel never left her. For a brief time in 1951 she took over the duties of reviewing mystery and detective fiction for The Saturday Review's "The Criminal Record" monthly column. Most of her books are rather scarce and with the exception of this title were published only in the US. I know of no contemporary reprints or paperback editions of any of her books which makes the likelihood of finding any of them even more remote. Based on this one offering I doubt that I will be investigating any more of her mystery novels. Her insights as a mystery reviewer, however, are right on target. At least they match my tastes and I have found her snippet reviews in "The Criminal Record" columns to be an excellent guide in finding new writers and books for my own neverending hunger for the genre. 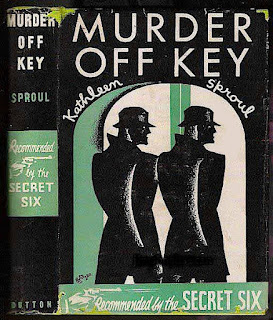