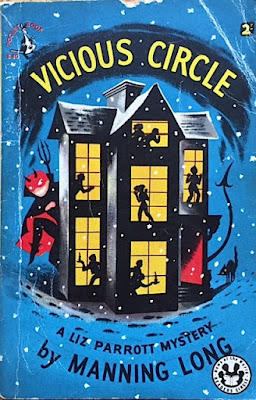 THE STORY: Gordon Parrott receives an urgent message from his Aunt Hester in upstate New York. She demands he come for a family gathering at Christmas, not just as her nephew but in "his official capacity." Parrot is an assistant district attorney in Manhattan an he has a feeling that something shady may be going on in the Allison household. At dinner two nights after they arrive an unexpected guest shows up -- Ruth Matlick. She claims to be married to Clifford Allison, Hester's son who is engaged to someone else. All hell breaks loose and later that night the woman is found dead in her room. Liz and Gordon turn detectives to find out who killed Ruth and why Aunt Hester wanted Gordon there in the first place.

THE CHARACTERS: Liz Parrott appears in her second mystery adventure but the first time as wife to Gordon who she met in Here's Blood in Your Eye. Liz is not a favorite of Aunt Hester's. Gordon asks her to be on her best behavior and downplay her life as an artist's model that so offends Gordon's haughty aunt. Instead Liz decides to play act and turn herself into the exact opposite of a glamorous artist's model. She does her hair up into a librarian's bun, shuns all use of make up, alters her fashionable form fitting dresses to appear frumpy and pretends to be a dishrag of an intellectual. She even drops Latin phrases into her speech to further annoy her husband. Gordon in retaliation flirts with Amy Thorne, Clifford's intended fiancee. When Ruth is poisoned and Liz was known to be the last person to see her alive the family points the finger at Liz as the primary suspect.  Never mind that several family members have much better reasons to have knocked off the unexpected guest. 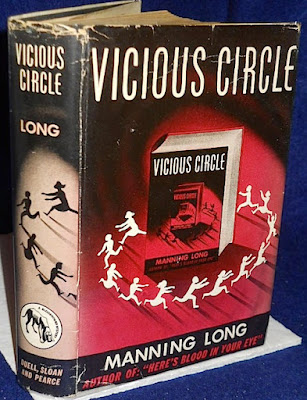 In addition to the problem of having a poisoner under their roof Liz is intrigued by the mystery of Clifford's book on Russian culture and politics, The Quality of Mercy, every copy of which has unaccountably disappeared from the house. There are whispered accusations of Clifford having plagiarized the manuscript. Three of his writer friends claim to have written the book themselves though Clifford managed to publish it under his own name. Added to this literary mystery is the puzzle of Clifford's possible near bigamous marriage to Amy. Liz is determined to get to the bottom of all the mysteries whether Gordon likes it or not.

The other supporting players include Aunt Mina, Hester's mannish sister always wearing "horse togs" and always seeming like a weak minded minion to the stronger willed matriarch; George Prentice, the handsome devil of the book, another writer friend of Clifford's who spent time in Russia with him and has his eye on Liz; Amy Thorne, Clifford's wife-to-be and the foil to Liz, spends much of the book toying with all the men and taunting Liz with outrageous theories of why she killed Ruth.

INNOVATIONS: Vicious Circle (1942) is divided into three sections. Part one, subtitled "Set 'Em Up", is basically an expository lead-in to the murder done as a screwball comedy. Much of the story in this section relies on Liz and her antics in disguise, her teasing Gordon, and the catty remarks exchanged between Amy and Liz. Part two, " Knock 'Em Down", introduces the murder mystery and Liz drops her disguise in order to turn detective. "Drag 'Em Out" is the final part in which another death occurs and the mystery centers around the true authorship of Quality of Mercy.  Liz spends a lot of time tracking down a MacGuffin she calls "the bulge" because she saw George hide something in his ski parka one day and secretly run off to hide it somewhere. The "bulge" will prove to have significance in the bibliomystery portion of the novel. 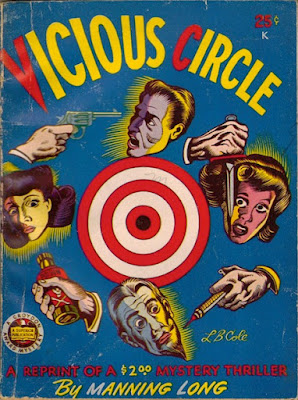 The more the book progresses the more I got a sense of the kind of household one finds in the work of Ross Macdonald. There are many family secrets Liz will uncover and a sense that someone was determined to keep all of them buried even if murder had to be the last resort.

THINGS I LEARNED: There are several scenes at a local saloon where Liz likes to play the jukebox. Though I like to compliment myself on a vast knowledge of WW2 era music (I was entranced by my parent's rare record collection) most of the songs I had never heard of including "I Give You My Word" and "Can I Forget You?" There's some singing in the book, too. While taking a bubble bath Liz lets loose with some lyrics from an innuendo filled tune called "She's Sellin' What She Used to Give Away", a 1938 tune written by Buster Jones and recorded by his brother Buddy. Gordon sings and his voice is compared to "a fine Kenny Baker tenor." Kenny Baker was a singer on Jack Benny's radio show in the 1930s and appeared in several movie musicals from 1938 to 1946 including Goldwyn Follies and The Harvey Girls.

Liz mentions "The Bride of the Mistletoe" several times in the last section of the book and it's also one of the chapter titles. Druid legends tell of a virgin sacrificed to Druid priests under mistletoe. From what I gather this is not human sacrifice, but the rape of a virgin performed for the satisfaction of a tree god. There is a 1908 novel that bears the same title written by Kentucky writer James Lane Allen that makes use of the legend as a metaphor for a wife's obedience to her husband. Nice. 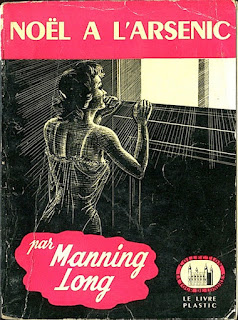 A pul-motor was an early device used in performing CPR. The police need to use one on Liz in the climactic scene that takes place in the Allison household attic.

EASY TO FIND? Pretty scarce this one. Currently there are seven copies available for sale in a variety of editions, paperback and hardcover, both US and UK. In my search for photos I uncovered a 1940s edition in a French translation. Apparently all of her books were translated into French. Remarkably, Manning Long's only detailed biographical information on the internet can be found in an article on the French version of Wikipedia. She obviously has her Gallic admirers.
Posted by J F Norris at 10:29 AM