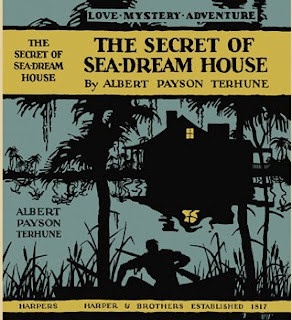 THE STORY: Saul Tevvis, wildly successful bestselling author, is plagued by fans and reporters and cannot start work on his second novel (Yes, the wild success follows after the publication of his first book.). When he receives a letter from his ex fiancee, a gold-digger of the worst sort, announcing her upcoming visit to New York implying a possible rekindling of their cold and dead romance he decides to escape. He arranges to rent Sea-Dream a house he remembers seeing in a remote portion of Florida the last time he was on a fishing trip. He uses an assumed name of Garry Keith and poses as a reclusive painter seeking inspiration in the subtropics. Safely away from Barbara, his rabid fans and the hounding press Tevvis hopes to flesh out his second novel and crank out a few chapters if not the entire first draft over a period of six months. But upon arrival at Sea-Dream he finds threatening letters warning him to leave, mysterious manifestations of "fire-branded phantoms", and several murder attempts from sharpshooters and knife throwing assailants. (Knife throwing again!) What exactly is going on? Is the place haunted? Are there criminals up to no good? Who will discover The Secret of Sea-Dream House (1929)? Tevvis does just that with the help of his trusty manservant and his brave collie Bunty.

THE CHARACTERS: The book is almost exclusively devoted to the exploits of Saul Tevvis. There are a handful of supporting roles but apart from Gedge, the British manservant, and Bunty there are only two other characters with any real parts to play. First is Wanda Reeve, daughter of the local reverend and the obvious object of Saul's libido. Terhune attempts to paint her as a woman of mystery with her mercurial temperament -- friendly at first, then inexplicably giving Saul the cold shoulder and dirty looks. She's almost an ornament serving no real purpose until she's called upon to fall in love with our rugged and manly hero in the final paragraphs.

The second supporting character of note is John King, a Seminole who is as far removed from the typical Indian as one can get. You have to give Terhune credit for working against cliches by making King an Oxford educated chemist experimenting with radium. This gives Terhune an opportunity to indulge in some didactic sequences about the wonders of radiation, managing to work in talk about meteorites and wristwatches with luminous dials.

ATMOSPHERE & TONE: I ought to mention that the book opens with a prologue written in such dense purple prose that just by turning the pages I was surprised my fingers weren't entirely stained. The prologue not only sets the mood with a lush style that recalls 18th century European adventure novels but also details the rich history of the setting of Sea-Dream House. We learn about the notorious pirate Don Lopez de Savedra who was so envious of a house he visited in Jamaica he stole nearly every ornament and piece of furniture, dismantled most of its architectural features, then rebuilt the house in Florida. Don de Savedra leaves behind him a bloody trail of murder and pillaging and inadvertently creates a house cursed from the moment the first brick is put in place. For over three centuries Sea-Dream remains in the hands of de Savedra's descendents and yet each owner dies a ghastly violent death within two years of taking ownership. That's one good thing for Saul Tevvis. When he decides to move in for a mere six months we know he'll survive. But he's sure to be in for a heck of a half a year.

INNOVATIONS: Now don't get me wrong. This was one helluva fun book. Last week I tore apart Berkeley Gray and his Norman Conquest thriller for being a potboiler out of step with the late 1950s and burgeoning swinging '60s. But this book from one of America's most prolific short story writers for the slicks of the early 20th century is definitely of its time. Pirates, a cursed house, underground chambers, bootleggers, knife throwing Indians, a magical talisman that seemingly disappears without a trace, a missing 17th manuscript by a world famous Spanish writer -- what doesn't this book have? It all sounds like a movie serial or an archetypal thriller, doesn't it? The originality arises from Terhune's unconventional treatment of familiar adventure story motifs and plot devices. He often makes fun of dime novels by turning them upside down and inside out as in the case of John King, the radium obsessed Seminole. There may be way too many secret passages but each one works in a way that you'd never expect and lead to places equally surprising. There may be a veritable army of unseen bootleggers and criminals literally hiding in the woodwork of Sea-Dream House, but Saul Tevvis is such a rugged athlete we believe he truly is capable of battling them all single-handedly. Sometimes he is aided by the daring leaps and jaw clamping teeth of his eagerly protective collie. Within the 340 pages the reader gets an abundance of derring do with fistfights, gun battles, one sword fight and a wrestling match. The book even has a nod to Sax Rohmer in its macabre finale complete with torture sequence and climactic conflagration.

THE AUTHOR: Albert Payson Terhune (1872-1942) had been writing stories for over 33 years when he created the characters and story in The Secret of Sea-Dream House. He had already written his most well known book Lad: A Dog (1919) and would go on to write many more dog stories and novels. I learned that in addition to his lucrative and prolific writing career Terhune was a breeder of collies. But what most people don't know is that he started out writing historical adventure stories with well over one hundred stories and serials under his belt before he ever wrote one about his beloved collies. Hubin's Crime Fiction lists a total of 13 crime novels, some of which are genuine detective novels. This one leans heavily towards the thriller subgenre though there is a smidgen of detective work.

THINGS I LEARNED: With such a colorful prose style it was practically guaranteed that I would resort to the dictionary at key moments. Here are a few of my vocabulary lessons gleaned from Terhune's novel.

sachem - A North American Indian chief, especially used among the Algonquins who lived way up in New York, New England and Canada. And yet Terhune uses it to describe the chiefs of the Seminoles.

conch - You may think this is simply a kind of shellfish with a sweet tasting meat and a shell that can be turned into a musical instrument. It was, however, also a derogatory term used to describe the Bahamian immigrants who settled in Florida. Within the context of the story it has an ugly connotation for non-whites with certain facial features: "...merely a ragged and sallow 'conch', lowest and most ignorant type of cracker, narrow of shoulder, dirty and stupid of face, an unworthy antagonist for any athlete." It was the only time I felt that Terhune was indulging in an inherent racism.

Terhune also refers to the Florida locals as crackers. I always thought this was a derogatory term for white people created by the blacks of the American South. While that is definitely true the word also happens to be used by Floridians almost as a badge of pride, especially among rural Floridians who reject urban sophistication. I learned that the term dates back to the 18th century because of plantation owners who would crack a whip in order to discipline their slaves.

EASY TO FIND? Not this time, my friends. Though it was published in both the US and the UK copies of The Secret of Sea-Dream House are few and far between. I found only five copies of the original hardcover. There are a few POD reprints but with prices ranging from $30 to $69 it's laughable that anyone would be desperate enough to want one of those shoddily produced copies usually taken from an illegal upload on the internet. I bought my copy back in 2010 and paid only $23. Luck, I think. As always when books are this scarce I suggest hunting around your local libraries.
Posted by J F Norris at 1:16 AM