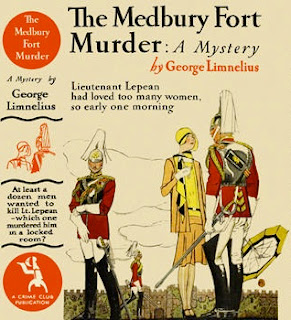 THE STORY: Loathsome Lt. Lepean is found with his throat cut and his head nearly severed from his body in a locked room at the isolated Medbury Fort situated on the Thames. Lepean was not at all admired among his fellow soldiers. The arrogant, sneering soldier was a known user of women and is revealed early on to be a ruthless blackmailer. There are at least four men who had very good reason to kill Lepean, two of them were being blackmailed. Was it one of them who slew the soldier or someone else?

THE CHARACTERS: At the start the story is told from the viewpoint of Major Hugh Preece who meets Lepean and faintly recognizes him from his good looks and his superior insinuating manner. A flashback occurs and we are taken to West Africa where Preece served alongside another soldier, Victor Wape, who also will end up at Medbury Fort fifteen years later. The West African flashback is one of the most enlightening pieces of writing I've read in a long time. I learned all sorts of arcane tidbits about African culture (circa 1914) and the British military presence there. But it is a courtroom scene with a horrifying conclusion that is the main reason for this flashback. That and the revelation of how Preece and Wape both knew Lepean in their past. We also learn how Preece met his wife Claire, his romantic fling with a stage actress named Prunella Lake, and a bit about Wape's personal life.

Lepean's murder is solved by three different policeman: a local constable who is not all that competent, Inspector Paton of Scotland Yard, and his superior officer Chief Inspector McMaster. All three do their part in uncovering key evidence in the unusual locked room murder which seems to have been inspired by a famous detective novel. This is told to us when Major Preece describes in detail how he plans to kill Lepean early in the book. When Lepean is found murdered exactly as Preece planned there is a strong suspicion that the major was the killer. But the story, of course, will turn out to be not all that simple.

Prunella also plays a primary part in the crime. We know that she urged Preece to eliminate Lepean who knew of a secret liaison between the two. It's not just because Prunella is now married to a prominent aristocrat that she fears exposure. There is something much more damaging to her reputation and her comfortable life. She writes a letter to Preece hinting at murder and instructing him to destroy the letter after he reads it. Claire will also enter the picture and will turn amateur sleuth in order to save her husband from the gallows when it appears that he is the primary suspect in the murder.

INNOVATIONS: This is one of the most unique novels I've read in early 20th century crime fiction because it is both an inverted detective novel and a true detective novel. It seems from the beginning that Limnelius was inspired by the books of Anthony Berkeley for we will follow Major Preece from his planning stage to the actual crime. But the book is told in third person and we get all sorts of viewpoints throughout the novel. On the night of the murder we are fairly certain that Preece did not follow through with his plans based on some events that happen prior to the discovery of the body. Yet there is an ambiguity about whether or not he did kill Lepean by the time he is discovered dead.

If you know the famous novel (which is mentioned twice over the course of this book) that Preece used as inspiration then you will also be looking for certain evidence and behaviors. There are a few specific incidents that make it possible for at least three different men to have killed the vile blackmailer, but odd clues and items keeps turning up that make the case very difficult to sort out. When one character asks Inspector Paton if he has any clues he says nothing. But we hear his thoughts: "Yes,...plenty of clues. Too many clues; but no evidence, and no motive." Paton is referring to the discovery of three different possible weapons -- a scalpel, an African machete found on the grounds, and a curved French bayonet hidden in a corner of the murder room. Other curious bits turn up like what was in the ashes of the fireplace in Lepean's room and what McMaster finds when he examines the broken down door. By the end of the book the revelations of what actually happened on the night of the murder uncover not only a surprise killer, but three other unexpected twists in the plot. The reviewer for The Bookman in the November 1929 issue called this a "...brilliant and well-written piece of detective fiction with a good plot." Nicely understated, I'd say.

QUOTES: "...this looked as if it were going to develop into one of the those "mystery" cases, so dear to the journalist, so repugnant to the best instincts of the professional detective."

"To discover the romantic sensual man it is unnecessary to probe very deep. Even a middle-class, plain, and respectably married detective is not entirely immune from the occasional indulgence in daydreams in which he pays the dashing and intensely amative hero."

"Then, fatally, for Prunella, he remembered her origin. She was not a genuine aristocrat. He might have married just such another as Prunella Lake himself. No! With hardly the slightest twinge of regret, he put the temptation from him. It was, in a sense, a triumph for the moral value of British snobbery."

THE AUTHOR: Lewis George Robinson used the pseudonym "George Limnelius" for two detective novels. Limnelius comes from his mother's maiden name Limnel. The Medbury Fort Murder is his first and most successful mystery novel. He based much of the plot on his personal experience as a medical officer in the Royal Army where he served during the first World War. though I found no proof of his being stationed in West Africa I am positive that he must've been there based on the concentrated detail of African geography and culture.

THINGS I LEARNED: I had a devil of a time trying to figure exactly in which African country Preece and company were stationed. Limnelius uses the outdated British names, circa the 1920s and some dating back to the 18th century, for all the towns and countries and regions. He names a river that either doesn't exist (Rene) or had its name changed. He refers to Mandingo as both a language and a region, the Mongola Valley (couldn't locate it) and a city called Sakene (another strike out). He mentions Senegalia (another passé name) but not Sierra Leone which was British occupied at the time. He talks of French Equatorial Africa which at the time took up about one third of the continent. I have a feeling the flashback in West Africa took place in what is now Sierra Leone, but it was very hard to pinpoint.

The term mammy palaver refers to both the gossip of African women and is a slang term the Brits used to talk euphemistically of sexual relations between white men and African women. Palaver apparently is not only an African term that means gossip but the act of sex itself. The Brits borrowed that slang term and mixed it with their own pejorative "mammy" for any African woman. There is a lot of race talk in the flashback sequence and much of it reveals some of the less attractive by-products of colonialism that began in the 17th century and still existed in the early 20th century.

The gruesome surprise that takes place during the climactic courtroom sequence in the flashback has a eerie resonance for what is going on in both Africa and the Middle East with the rise of brutal terrorists who look back to their ancestors in meting out gory retribution.

I also learned more than I ever cared to know about slaughter practices in a kosher butcher shop. The visit Chief Inspector McMaster makes there provides a major clue to the solution of the mystery.

EASY TO FIND? Only a handful appear for sale on the various bookselling websites. Copies start at a mere seven bucks and run upwards to $63. None of the copies I found came with the apparently very rare dust jacket. There are no paperback reprints that I know of, either in the US of the UK where it was originally published. There is only one US reprint in hardcover from Grosset & Dunlap. Of the two books Robinson wrote under his "George Limnelius" pen name The Medbury Fort Murder is the easier to find. There's even an eBook version at Hathi Digital Trust!  The Manuscript Murder (1933), his second and last mystery, is extremely scarce.

UPDATE, NOV. 2017:  Thanks to a reader in Spain (I think) I have just learned that George Limnelius wrote a third mystery -- Tell No Tales (1931, Bles).  There is only one English language edition  from the UK publisher and no US edition at all.  And apparently at least one Spanish translation as well (see comments below).  I would guess that this third book (which I had never heard of until today) must be the most difficult one to find a copy of these days.

This is the third of many 1929 books I am reading and writing up for the "Crime of the Century" month long celebration of mystery novels that were published in that year. Previously reviewed were The Secret of Sea-Dream House and The May Day Mystery. More 1929 book reviews are on the way!
Posted by J F Norris at 10:17 AM