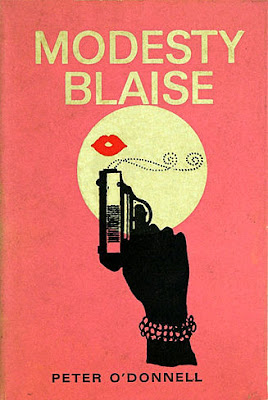 I don't think this really should be considered a forgotten book, but I'm going to write about it all the same. Surely the character cannot be totally forgotten. Peter O'Donnell created Modesty Blaise as a comic strip back in 1963 and the blurb on the back of my reprint edition tells me the strip ran for 38 year and was syndicated in over 40 countries. The first novel didn't appear until 1965 making this year her half century anniversary. And she still looks fabulous! Always will.

I've never read any of the books until a few days ago nor had I even seen the comic strip until I went trolling the internet looking for images to help illustrate this post. But for anyone well versed in spy fiction, adventure novels and, of course, comic strip history, Modesty Blaise will never be forgotten. Truly the first successful and extremely popular female super spy (though that is a very loose term as you will soon learn) Modesty served as the template for all other super heroines of her type. There have been plenty of Modesty Blaise knock-offs in genre fiction, but none come close to capturing the best of her qualities.

She seems to me to be the female equivalent of Simon Templar since she actually began her life as a thief, engaging in capers with her lieutenant Willie Garvin and together amassing a huge fortune that allowed them to live in luxury. Only when the British Secret Service learn of her enclave known as "the Network" does she become a spy of sorts. Sir Gerald Tennant becomes her liaison with the British government and she and Garvin are called upon to help foil a slew of sadistic and ruthless international criminals in a series of eleven novels and two collections of short stories, as well as the comic strip adventures. 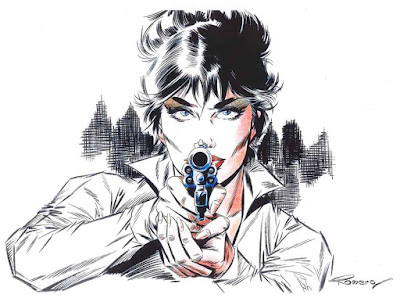 At the start of this introductory novel Garvin is in prison in an undisclosed South American country. Modesty infiltrates the compound, single handedly dispatches the guards and sets him free along with the rest of the prisoners. They join forces in Tennant's plan to prevent the theft of a multi-million British pound shipment of diamonds intended as payment for a Middle Eastern sheikh, one of the UK's most respected allies.

Garvin is the gadget expert of the books and he has invented several lethal weapons like an exploding tie tack and a lipstick that releases lethal nerve gas. The scene in which he puts the infernal device hidden in his diamond tie tack is one of the most gruesome in the book. I literally gasped and groaned at what happens to the poor vain sap who is given the tie as a gift. The action scenes are more graphic than I expected. Modesty and Willie are both very adept at martial arts and hand to hand combat. Neither will use a gun unless absolutely necessary. The book is nothing more than set piece after set piece as they do battle with the numerous thugs and villains. Revenge is the motivating factor in many of these violent sequences with the villains intent on killing either Modesty or Willie or both. Our heroine and hero suffer more than their fair share of cuts, stabbings and near broken bones, but the villains get what's coming to them...and then some! 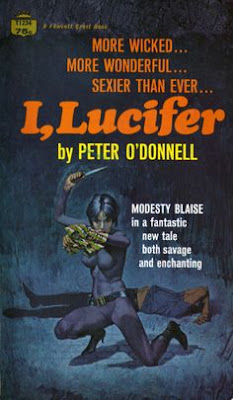 Modesty Blaise was turned into t what I think was a very dull parody of spy movie. Italian actress Monica Vitti wearing a ridiculous number of wigs played the lead impassively alongside Terence Stamp as Willie Garvin. Some excellent casting in his part at least. The book shows Modesty to be tough, smart, sexy and oddly compassionate in her battle against nefarious master criminals and their army of thugs. But you'd never know that from the movie where she comes off as nothing more than 60s pop culture fashion plate who kicks a lot. For a parody movie Vitti was thoroughly unhumorous in the role. No comedy chops whatsoever. Best stick to the books in order to get to know the real Modesty. I plan to go through the whole series in the coming months. And I'll do it in much more detail next time.
Posted by J F Norris at 10:14 AM