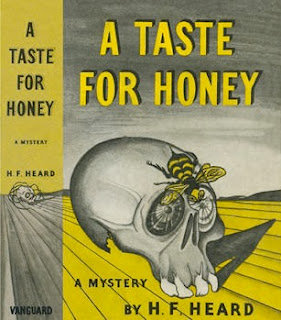 Now that Ian McKellan is entrancing moviegoers with his performance as the retired apiarist Sherlock Holmes all I can think of is bees. And Holmes. I also happen to be immersing myself in the crime fiction of two writers who were both avowed Holmes addicts -- Gerald Heard and Beverley Nichols. It's been difficult not to think of Holmes for the past couple of weeks. And then, of course, I have also read Mitch Cullin's beautiful novel A Slight Trick of the Mind on which the movie Mr. Holmes is based. I remember much of Cullin's delicate prose, the talk of bees and the education of the young boy at the hands of the aged Holmes. So today I thought I'd write about a book I think all mystery enthusiasts ought to not only be aware of but a book that should be essential reading.

A Taste for Honey (1941) by H. F. Heard is one of the earliest and most cleverly disguised Holmes pastiches in the genre. It's an unusual for book for many reasons: Heard's densely rich somewhat self-consciously ornamental prose; the mixture of elements from the traditional detective novel, the horror novel and the mad scientist genre; but most of all the manner in which he wraps the old man detective in a mystery then drapes him in a shroud of enigma (to paraphrase Churchill's famous quote about the Iron Curtain). Though the detective calls himself Mr. Mycroft we never know if this is meant to be his first name or last name. He confesses that it is "only one of my many family names". But who else has retired to the south of England to become a beekeeper? It's all a little too convenient. 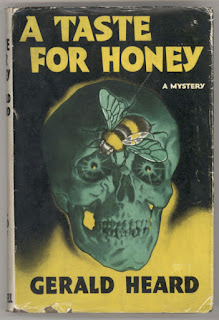 The story is not so much a true whodunit but there is much that is mysterious besides the identity of the detective. Sidney Silchester, the erudite, somewhat snobbish and slightly befogged narrator, apparently has never heard of Sherlock Holmes but he is more than eager to listen to the detective's colorful tale of the sinister next door neighbor from whom Silchester used to buy his honey. Seems Mrs. Heregrove, the neighbor's wife, has died from a bee sting and Mr. Mycroft is suspicious that it was not an accident but a gruesomely engineered murder.

And that is all I will reveal of the plot. You really need to read the book yourself to experience the full impact of story. What Heard does with this seemingly simple idea borders on genius. The writing is lush, a bit too fanciful for its own good, but Heard succeeds in transporting the reader to a world of unimaginable horror. The battle of wits between detective and murderer recalls the long gone days where heroic acts trumped villainy, where the unveiling of breathtaking adventures was the only reason for telling a tale of mystery. This is one forgotten book that should never be forgotten. I'd add that it never will be forgotten by anyone who reads it.

Luckily, A Taste for Honey was such a huge success in its time and became something of a cult phenomenon in mystery fiction that is has been reprinted multiple times since its original publication back in 1941. There are hundreds, perhaps thousands, of paperback copies of this little masterpiece offered for sale in the used book market. I'm sure there must be an electronic version by now, too. Go find one and read it...or else!
Posted by J F Norris at 7:46 AM