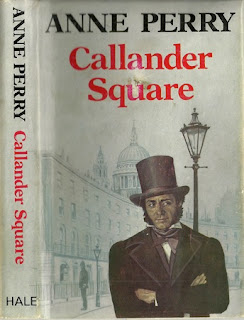 Anne Perry was at one time considered one of the finest novelists specializing in historical mysteries of the Victorian era. Until a few days ago I had never read any of her books.  I thought perhaps that because she has been so prolific in her nearly forty year career that they would be less than satisfying for some reason. But when Rich Westwood announced that 1980 would be the year for August's "Crime of the Century" meme I knew I could put off no longer sampling a book from her varied bibliography.  I was both impressed and disappointed.  Mostly, I came away with a deep respect for her love of the era and its literature. Based on this one book it is clear she is fully deserving of all her past and present accolades.

Callendar Square (1980) is the second novel in her long series featuring Inspector Thomas Pitt and his wife Charlotte. Pitt seems to be more of a supporting player in this second outing while his wife and her sister play at being amateur sleuths. Lady Emily, in fact, does most of the uncovering of shameful secrets (and there are closetfuls of them) and she rushes to Charlotte's home in order to dish the dirt with her sister.  Charlotte then divulges those secrets to her husband who embarrassingly must admit that the two women have a skill at getting people to spill the beans in a way he cannot.

There is no mistaking that Perry intended this as a crime novel with plenty of mystery. In the opening pages she delivers a grisly scene straight out of the page of Edgar Allan Poe when two gardeners accidentally unearth human bones while trying to plant some trees. The police are called in and the bones are soon identified as the remains of two babies. An investigation begins into who could've done such a horrendous thing as burying the bodies of infants in a public square. But almost immediately afterwards the novel takes on the air of a satiric novel of manners.  Social status and the contrast between aristocrats and their servants dominate the proceedings. The reader is constantly reminded that policeman were part of the working class and treated as servants. Pitt, however, does not behave as expected for a member of his class and is often rebuffed by both servants who are appalled that he uses the front door to call and the heads of the household who find his direct manner rude and his cultivated manner of speech as "putting on airs." 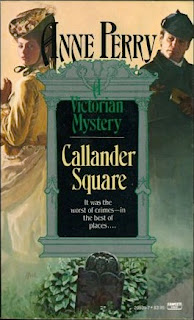 Detection is rather weak and limited to protracted interrogation scenes. However, these scenes are lively and fascinating for Perry is a master at Victorian syntax. Many of the dialogue sequences demand to be read aloud in order to fully appreciate the zing and the sting of her verbal dexterity.  Each encounter between Pitt and those he questions becomes a battle of wits with Pitt doing his best to impress the snobs and the hypocrites and show them that the police are not fools to be trifled with.  There are even scenes that call to mind the stratagems of Count Fosco or the desperate scheming of Lady Audley. A early sequence of wicked wordplay and one-upmanship between the imperious Lady Augusta Balantyne and her sinisterly handsome footman Max is one such highlight.

This book is very much fashioned after the mid Victorian era sensation novels.  It most reminded me of the work of Mary Elizabeth Braddon (best known for Lady Audley's Secret) with nearly every character plotting and scheming to protect or achieve their own interests.  Blackmail turns out to be a favorite pastime of many of the characters, some are exceedingly better at it than others. Detection takes a back seat, however. Perry is much more interested in the machinations of these characters to whom their social standing is of utmost importance.  She takes the plot formula of the old sensation novel and gives it a strangely contemporary twist cleverly inserting some subversive thoughts and modern worldviews into the storyline.  While some of her choices are unabashedly anachronistic (a male sex surrogate, for example) she somehow manages to make these concepts revolutionary 19th century beliefs, far removed from what should be shockingly amoral to anyone of this era.

There are some finely drawn moments of dramatic irony that show off Perry's talent in maintaining suspense and creating tension. The reader is privy to many events and secrets other characters are unaware of and we watch some of the best scenes play out with rigorous attention paid to how one character gains control over another. What this novel lacks in the way of fair play clueing related to Pitt's unravelling of the mystery of the babies' parentage and why they were buried it more than makes up for in a total immersion in Victorian mores, speech, fashion and history.  While the ending is rushed and sloppy with a motive pulled out of thin air and an overly melodramatic confession from the villain the trip getting there is engrossing, diverting and at times unexpectedly philosophical.
Posted by J F Norris at 5:48 PM