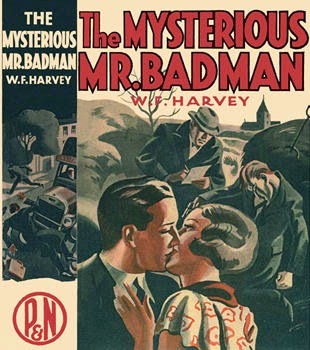 The opening sentence to The Mysterious Mr. Badman (1934) is a corker:

When at two o'clock on a sultry July afternoon Athelstan Digby undertook to keep an eye on the contents of the old bookshop in Keldstone High Street, he deliberately forgot to mind his own business.

Partly on holiday, partly to advise his nephew Jim Pickering on whether or not to take up a physician's locum tenens position nearby Mr. Digby has been minding Daniel Lavender's bookshop where he has been temporarily given a bedsit while visiting the town and his nephew. On his first day in charge Mr. Digby is visited by three successive customers all looking for the obscure work The Life and Death of Mr. Badman by John Bunyan, best known for his religious allegory The Pilgrim's Progress.  Mr. Digby is intrigued.  Even more so when not too coincidentally a copy is brought into the store by a young man selling a pile of old books.

Based on the title alone you have probably guessed that this is not a book about a "bad man" but rather a bibliomystery about the desire to own a book. But is the book all that valuable?  Turns out the book holds a rather incriminating letter with information that could be damaging to noted M.P. Sir Richard Mottram.  No sooner has Mr. Digby found this letter the shop is broken into and the book stolen.  Then one of the inquisitive customers is found propped up against a tree, a pistol in his hand, dead from an apparently self-inflicted gun shot.  Is his death related to the stolen book?  Or the letter inside the book?  Was it suicide or murder? The search is on for not only the book but for the other two men who were inquiring after the volume.

Mr. Digby is joined in his amateur sleuthing by his nephew Jim and Sir Richard's stepdaughter Diana Conyers who was the person who gave the books to the boy to sell in the first place.  Together the three of them uncover an extortion plot, some political machinations, and one of those familiar unctuous gentleman villains so popular in thrillers of this era. Harvey combines some excellent detection with the usual tropes of the pursuit thriller. Mr. Digby puzzles out the method and motive for the murder based on the hairs of a mountain goat, some wood shavings and a missing sleeping bag! How's that for some amateur detective work?  Jim and Diana engage in subterfuge, farcical impersonation and all sorts of wily Q & A style detective work in order to get to the bottom of the skulduggery. And with a cast of characters with names like Olaf Wake, Euphemia Upstart, Neville Monkbarns and Kitchener Lilywhite you know you in for a bit of whimsy along with the mayhem.

The Mysterious Mr. Badman was a delight from start to finish, the perfect book to end last year's indulgence of vintage mystery obscurities.  Quite a surprise to me also since I had known William Fryer Harvey, prior to finding this elusive book, only as the writer of excellent macabre and supernatural short stories that tend to be a lot more somber than this often lighthearted novel.  He is probably best known for his horror story about a possessed piano player that became the movie The Beast with Five Fingers. Harvey's creepy M. R. James influenced paranormal story "August Heat" is found in numerous anthologies devoted to the best of supernatural fiction.

A bit of research proved to me that Athelstan Digby previously appeared in an equally rare book of short stories in which he apparently first appeared as an amateur sleuth. Whether or not Jim Pickering also appears in The Misadventures of Athelstan Digby (Swathmore,  1920) I will never know.  I remember a copy of this genuinely rare book turned up for auction on eBay a while ago but I failed to win the book. It sold for over £200 if I remember correctly.

Currently there are four copies of ... Mr. Badman for sale online and they range from $70 to $115.  I paid £1 for mine back in 2005. Very lucky! Chances of finding one in a US library are slim unless you have access to the University of Arizona or UCLA libraries where two copies are held. As ...Mr. Badman was published only in the UK by Pawling & Ness, a very minor and short-lived publisher, I imagine that you might have better luck if you live in the UK or Canada and consult your local interlibrary loan services.

UPDATE:  Some fun news related to William Fryer Harvey's other detective stories. A reader of this blog sent me an email with a link to another blog where anyone interested can read the stories from The Misadventures of Athelstan Digby.  Just click here. 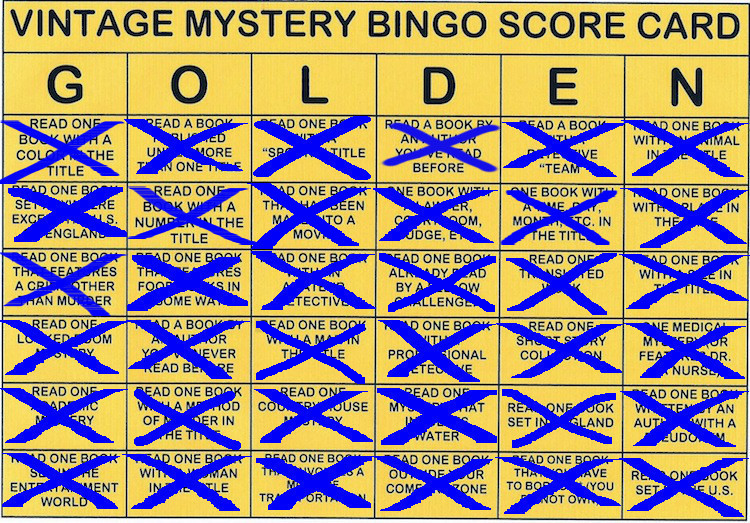 This was the very last book I read for the Vintage Mystery Golden Age Bingo Reading Challenge.  It filled in the card completely on space L4 "Book with a Man in the Title."  Thought I'd be done with 36 books a lot sooner.  I was reading until the stroke of midnight on December 31.  For those interested, all the books I read for both the Golden Age and Silver Age Bingo Cards are listed in this post.
Posted by J F Norris at 11:01 AM