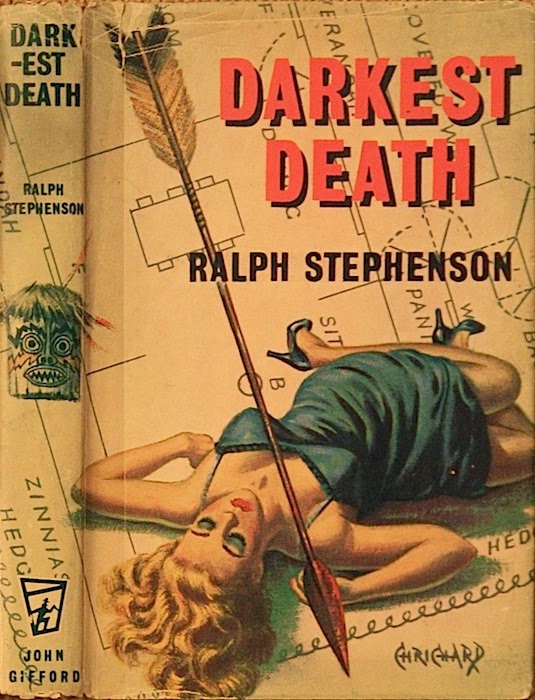 An unusual setting of West Africa in the 1950s, a locked room murder involving death by bow and arrow, evidence of tribal witchcraft rituals in the surrounding village, and a cast of characters whose names seem inspired by the board game Clue. There’s even a map of the scene of the crime. Sounds like a lot of fun, doesn’t it? So much opportunity for a send-up of the traditional detective novel or an intriguing homage to the works of John Dickson Carr. Why then is Darkest Death (1964) such a dreadful mess? It’s a greater mystery than the one Ralph Stephenson presents us in the pages of his alternately boring and quirky detective novel.

A group of British ex-pats have settled themselves into a cozy unnamed village outside of Accra in the Gold Coast colony of West Africa. Stephenson for some reason sets his story in an unspecified year in the 1950s, but it must be before 1957 when the colony became the independent nation of Ghana. Within the first couple of pages I knew I was probably in for trouble when I noticed that the characters’ names were taken from a box of crayons. Harry and Sally Gray, Jimmy and Heather Brown, Hetty and Tweeny (!) Green, Robert Gold, Dennis and Mona Silver, Mr. and Mrs. Blue... You get the picture. There’s Miss Scarlett, too! Yes, Ann Scarlett with two Ts who instantly made me think that Stephenson was trying to pull off a parody of Clue. Or for Stephenson, I guess, Cluedo is more accurate. No such luck. In fact not one person in the story ever comments on the ridiculousness of everyone having a rainbow array of surnames.

The story begins with a New Year’s Eve party with lots of drinking and dancing and transparent exposition clumsily handled. The cast of characters are introduced in dizzying (but colorful) succession. The women chit chat endlessly about clothes, gossip about characters we never meet, and indulge in other pointless banter. The men practically slap each other on the back while tossing off cocktails and speaking like the worst sort of British stereotypes. "The war" is mentioned repeatedly. I’m guessing they are all WW2 veterans, but no one is ever very specific about which war they are talking about. Only Dennis Silver’s entrance brings any kind of interest and mystery to these opening chapters when he begins an info dump monologue on African witchcraft. This seems to be taken verbatim from the two books Stephenson felt it necessary to acknowledge in the “Author’s Note” that precedes the first chapter. Those books are Sir James George Frazer’s seminal study on symbology, rites and rituals in religion The Golden Bough and Religion and Art in Ashanti by R. S. Rattray. In an offhand comment that concludes an early chapter (not cleverly hidden among the rest of the chit chat) we get the tantalizing tidbit that Sally Gray and Hetty Green look remarkably similar from the back in their striking black gowns. An alarm bell couldn’t have sounded any louder to signal an imminent mistaken identity murder.

Sure enough a day later Sally Gray is found murdered in the locked and barred sitting room of the Green’s jungle bungalow. Entry to the house is only via French windows serving as doors that line a veranda extending alongside the entire perimeter. The veranda is covered with a fine mesh of mosquito netting and all the windows and doors are faced in burglar bars. (see the map below) But the front door is locked from the inside as is the rear entry to the house. Summoned by terrifying screams three men run to the house and break down the door. But it’s too late. Sally has died from a fatal strike to the chest from a tribal bow and arrow. How on earth did the murder use the weapon and escape from a locked and barred house? No holes are found in the netting outside the veranda and the bow is nowhere to be found.

When the police arrive the story starts to become interesting. But I immediately noticed more funny business with the names: Supt. Stalky Heron, James Raven, and Charles Finch. Apparently having tired of his Crayola muse Stephenson resorted to a Peterson Field Guide for the rest of his characters' names. Only the local doctor escaped the bird dubbing. His name is MacGregor. No real relief though for MacGregor is saddled with a cartoon Scottish dialect. Six of one, half a dozen of the other as my mother used to carp.

Nothing is made of these names. To a mystery fan like me this was more than troubling. Such an obvious choice is rife for possibility in a detective novel and was completely ignored. Not even a joke mentioned in passing by any of the characters. Nothing! A writer like Ellery Queen for example would have made a choice like this and run with it planting red herrings all over the place related to the surnames, maybe even reserving an entire chapter to what seems like a coincidence but in fact a sinister design. Not so with Stephenson. It must’ve been a case of the writer chuckling privately to himself. I kept rolling my eyes.

The detective work leaves a lot to be desired. An obsession with fingerprints and police photography mixes with the usual endless parade of suspects being interrogated in Q&A sessions. In an effort to avoid revealing the dirty secrets among the many adulterous men who were keeping company with the trampy Hetty Green the Europeans accuse the African servants and obfuscate the police work with gossip of witchcraft. Silver, the anthropology expert, points out Green’s missing black cat is a sure sign of some local having kidnapped and slaughtered it for an essential ingredient used in an invisibility spell. Isn’t it possible Sally Gray’s murder actually involves supernatural methods? When Silver fails to convince the police the rest of the men (and a few women) offer more accusations against the African servants because, you know, they’re just plain shifty and some of them have filched spare change and food from their employers.

In one of the most patronizing parts of the book Finch (the primary detective) talks in Pidgin English to the servants. They also reply in pidgin English making it seem as if the book has been transplanted to the Limehouse district of a Sax Rohmer novel and the Africans transformed into the worst kind of Yellow Peril novel supporting cast. It doesn’t help that all of the Africans refer to all of the European characters as Master or Missy. Sometimes you just can’t overlook this kind of petty racism.

Darkest Death would’ve been a much better book with its promising plot and exotic setting in the hands of a much more talented writer. I can imagine how gasp inducing the finale would have been had this been a John Rhode book or one by Carr or Queen. In the hands of this mediocre writer the locked room mystery is a fizzle with a borderline preposterous solution, the revelation of the murderer comes with a lame forced confession, and the climactic pursuit of the villain on the run  leads to the beach and ends in a swimming race with half naked policemen trying their best to prevent a suicide by drowning. Stephenson tacks on a happy ending coda in which our detective heroes raise glasses in a champagne toast commending themselves on a job well done while simultaneously congratulating Stalky Heron for snagging Ann Scarlett as his wife to be.

Well gang, they can't all be winners. 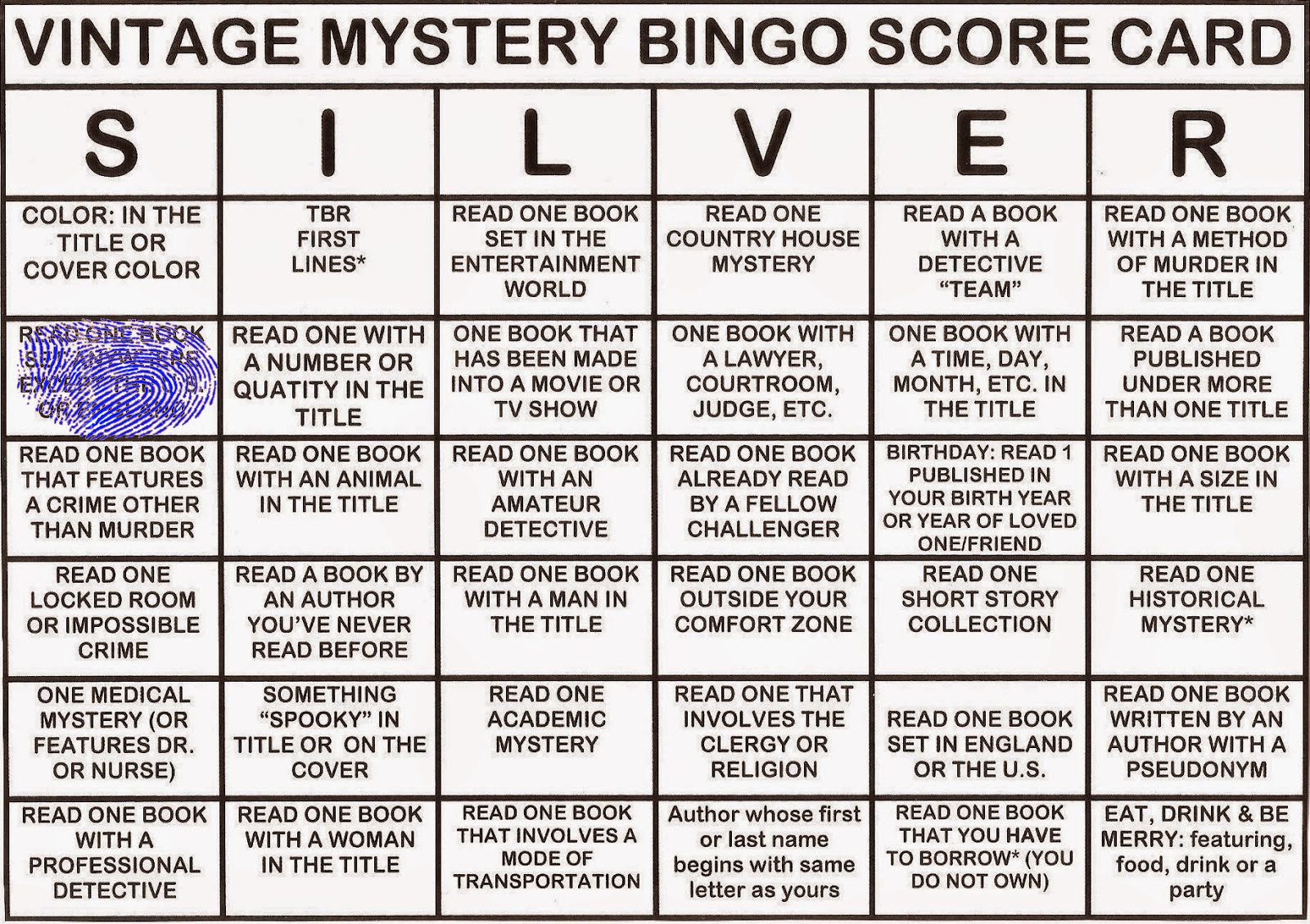 READING CHALLENGE update: My first book on the Silver Age bingo card. It covers S2 - "Book set anywhere except the US or England"
Posted by J F Norris at 12:50 AM