Blondes Are My Trouble - Martin Brett 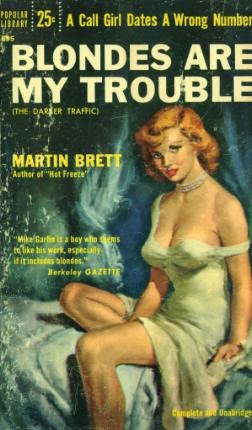 The residents on the lower floors of the Cressingham Apartments have no idea what's going on above them.  Catering to the needs of the exclusive, the reclusive and the unobtrusive this tower of an apartment building is known to be the home of some of Montreal's most wealthy snobs.  All night long men are seen entering the Cressingham in groups and sometimes paired up with attractive women in tailor made outfits.  They pass the doorman, the telephone operator and porter heading for the self service elevator that will take them to the upper floors for an evening of private entertainment.  It's one of the most well kept secrets in Montreal -- a privately run prostitution enterprise free from the control of mobsters or police graft. Mike Garfin's latest case in Blondes Are My Trouble (1954) lands him smack in the middle of a mess that leads to the busy bedrooms of this elite den of iniquity.

At the start of this second novel in a brief series featuring Montreal's tough guy private eye Mike has reluctantly accepted Trudi Hess as his client.  She's being followed by a mysterious well-dressed blond man and wants to know who he is. Garfin learns that Trudi is a dressmaker who had a shop catering to clients with refined tastes and is a recent immigrant from Germany. Currently she devotes her time at an employment agency specializing in finding jobs for immigrants. When pressed for more details Trudi clams up though she's more than willing to accept Garfin's advances when he grabs her in his arms and kisses her wildly.

This is not just a gratuitous pass or an example of the hero's uncontrollable libido you usually find in a private eye novel of this era.  Garfin doesn't take advantage of his attractive female clients.  He has a hunch about Trudi's real line of work from the way she poses, the way she talks, the extreme mood changes that flip on and off like hot and cold water faucets. So he makes a pass at her and her over eager reaction is a sure indicator that his hunch is right. This is Garfin's kind of detective work. A few chapters later he'll being doing some more detecting in Trudi's apartment in the Cressingham. 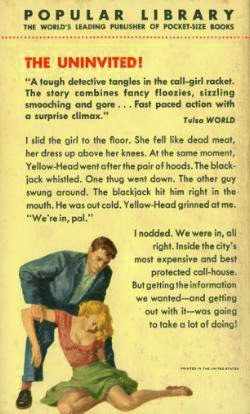 Prior to Trudi's arrival Garfin was preparing for a one night only job as security man at an elaborate birthday bash for one of Montreal's debutantes.  He's been hired by Mrs. Alverton, society matron who has her eyes on the father of the Elizabeth Endicott. She is using the party as an excuse to get her hands on the rich father.  Garfin is there to guard the treasure trove of expensive birthday gifts that Elizabeth is bound to receive when the posh guests arrive. He shows up in black tie and tails looking handsome and impressive, receives his instructions to mingle with the guests. Mrs. Alverton even encourages him to dance with any of the women if he feels so inclined. To Garfin it all seems a little too relaxed for a security gig.

As the party gets under way, the young women twirl their way across the dance floor Mike can't help but notice one particular girl whose clothing makes her stand out -- not in a good way -- from the rest of the girls in their gowns and finery.  This girl is trying to push away the pawing hands of an obese middle-aged man and isn't succeeding.  Mike steps in, gives the older guy a lecture and a shove or two and rescues the girl from a possible ravishing.  Once alone with Mike the girl pleads with him to take her away from the party and to the police.  He's puzzled and conflicted.  While he wants to help her and can't really abandon his job and risk losing his pay for the night. He has to leave her momentarily in trying to sort out his dilemma and when he returns he sees he being pushed into a sedan that speeds away. Thinking quickly he borrows a car rather forcefully from a guest and races after the sedan where it pulls into a truck stop cafe. It doesn't end well when the girl is found crushed beneath the tires of an eighteen-wheeler.

The two stories -- Garfin's pursuit of the mysterious stalker after Trudi Hess and the seeming accidental death of the girl at the truck stop -- eventually merge in the hallways of the Cressingham, a hotbed of vice and violence in Montreal.  Along the way we meet a few characters previously introduced in Hot Freeze.  There is the French Canadian Captain Masson who refuses to learn English and who has little patience for Garfin's habit of stumbling over dead bodies. More importantly we get to spend a lot more time getting to know the intimate relationship between Mike and his girlfriend Tess whose line of work comes in very handy during this seedy case.

Though Mike Garfin first appears to be your typical wise guy private eye as the reader delves further into this second adventure in Montreal's dark underbelly we see Garfin is far from your run-of the mill gumshoe, in fact he's something of an intellectual.  Once again we are reminded he would rather listen to classical records at home rather than rock and roll.  And he goes out of his way to show off his arcane knowledge of the Praguerie when one of the suspects claims he is visiting Montreal form his home base of Manhattan in order to finish a thesis on this aspect of medieval French history. I never heard of the Praguerie and I consider myself college educated.  It was kind of jaw dropping having a private eye lecture me on Charles VII, the Hundred years' War and the revolt of French nobility modeling themselves on Bohemian aristocrats.

Similarly there is an atypical emphasis on women's clothing and wardrobe throughout the story. Frequent references to the way women dress, their make up, and how clothes enhance their figures are not there solely for salacious appetites.  Garfin's keen eye for the way a lady looks helps him connect the dots in the case, or more accurately helps him connect Trudi Hess' past to the well dressed women in the Cressingham.  The reader would do well to pay close attention to Garfin anytime he starts talking about clothes.  One particular observation he makes early in the book could lead the read to discover a surprising connection, one of the biggest shocks in the twisty and incredibly violent finale.

For a story essentially about high priced hookers this is a bloody and brutal tale. The original title of the book is The Darker Traffic. Less appealing for a private eye novel but so much more fitting as an expression of Brett's visceral feelings about this seamy world. In one of the review blurbs on my paperback edition Brett is compared to Mickey Spillane and Garfin to his namesake Mike Hammer and rightly so. I don't recall Hot Freeze being such a free-for-all when it came to fistfights, beatings and bullets. The story is one of the earliest novels daring enough to expose the greed and corruption of the soulless people using and abusing women as commodities. The surprising villains of the piece stop at nothing when Garfin tries to upset their cushy business in the flesh trade. What begins as a formulaic lecture by Garfin accusing the bad guys of amorality turns into a literal explosion of revenge and last minute trigger pulling.  There is little empathy spared for those who have exploited women so miserably and cruelly. It's clear how Brett feels about what one time was thought of as a victimless crime.  Once you finish reading this depiction of the effects of prostitution on the women involved you may come to see how poor a euphemism and misnomer is the phrase "victimless crime." 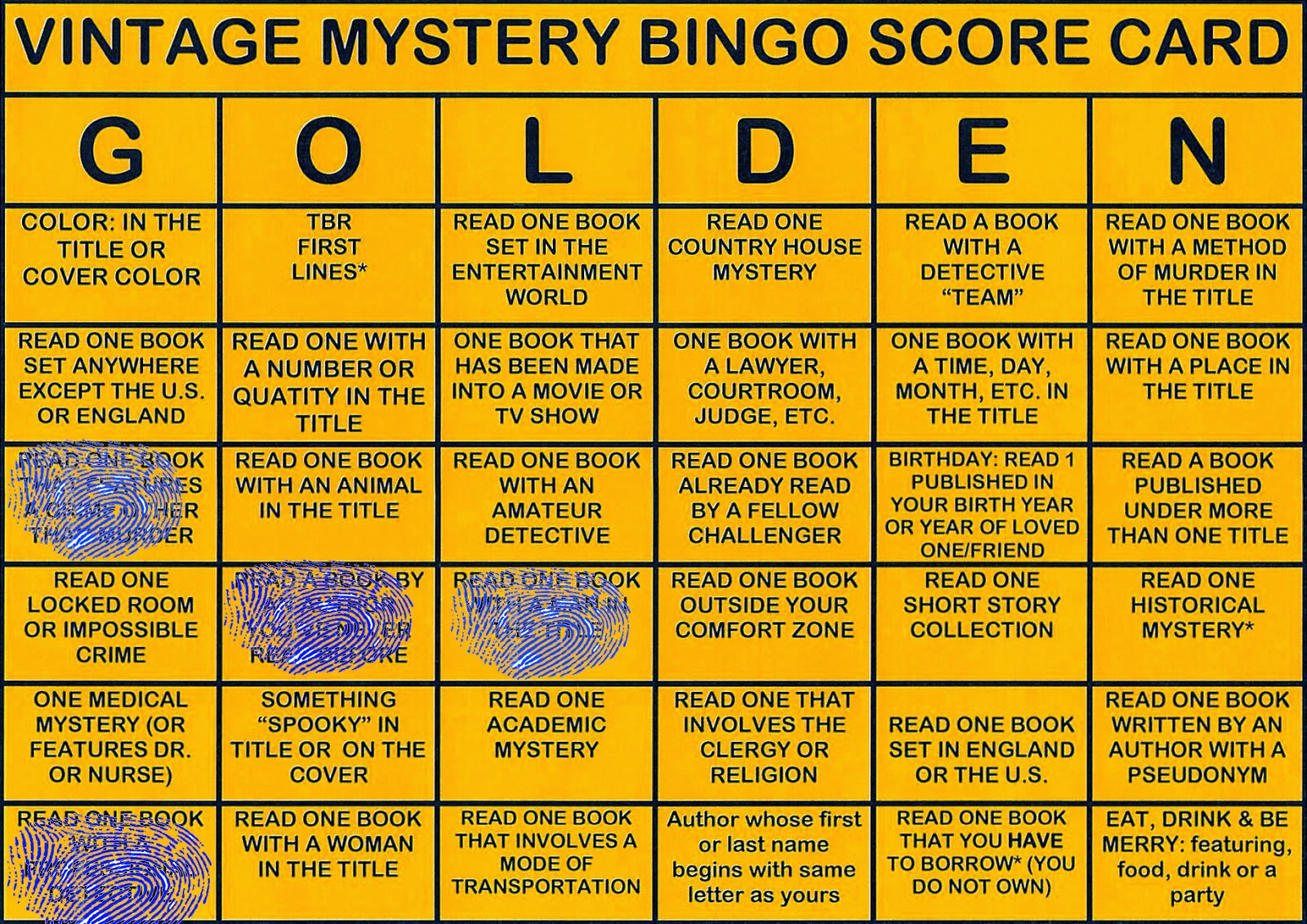 Reading Challenge update: G6 "Book with a professional detective" on the Golden Age card.
Posted by J F Norris at 1:30 AM