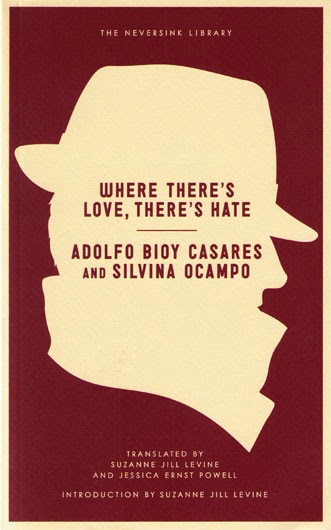 Los Que Aman, Odian (1946) was the only collaboration between Argentinian writers and husband and wife Adolfo Bioy Casares and Silvina Ocampo. It's both a love letter and a send-up to the detective novel. Translated by another collaborative team, Suzanne Jill Levine and Jessica Ernst Powell, this short novel showcases the two writers' fascination with surreal and fantastic events while simultaneously presenting a story of what Ocampo says encompasses her credo: "not to forget what is most important in the world: friendship and love, wisdom and art."

The story is narrated by pompous and smug physician Humberto Huberman who has traveled to a seaside resort called Bosque del Mar to work on a screenplay adaptation of Satryicon.  The egocentric doctor confesses not at all abashedly that he has been commissioned by a film company to write the script. He's a Renaissance man, we learn, but in the worst sense. Huberman is insufferable in the first few pages as he brags about his work, his numerous talents and his tastes in fine art and literature.  He makes allusions to obscure characters from Wilkie Collins, quotes Petronious, and peppers his speech with French. And he hates the detective novel craze with a passion.

It's all tongue in cheek and rather ingenious on the part of the writers to give us a narrator who loathes mystery novels and all the artifice. Dr. Huberman, you see, will become the amateur sleuth of the novel.  In effect his hubris and ego get the better of him. As much as he agrees with Petronious' criticism of a boyhood obsession with pirates and fantastical adventure stories creating a generation of "blockheads" who "neither see nor hear one single thing connected to the usual circumstances of everyday life" and draws analogies to the current fad of detective novels doing the same thing to adults of his own generation he will nevertheless succumb to the detective fever that got the better of Gabriel Betteredge in The Moonstone.

A lover's triangle between two sisters and one man, all guests at the same hotel where Huberman is staying, serves as the fuse setting off tumultuous displays of misplaced love and affection among the hotel's employees and guests. Impassioned arguments between the two sisters, clandestine trysts, amorous advances made in darkened stairwells -- the hotel is a hotbed of desire and sex and eventual murder. Mary Gutierrez, translator of British detective novels into Spanish, is found dead in her room apparently having poisoned herself after a heated argument with her sister Emilia.  Or was the strychnine found in her cup of hot chocolate put there by someone else?

Casares and Ocampo have a lot of fun with detective novel tropes. Characters in disguise, a couple of false solutions before the truth is revealed and an abundance of clues all play out in the fast-paced and compactly told story.  The detective novel itself becomes a focus of their story as two police inspectors in an effort to find clues begin to devour a pile of mystery novels found in Mary's room. The cleverest of these clues is the apparent suicide note written by Mary which turns out to be a passage lifted from one of the many books she was working on, a novel by Michael Innes no less! With a nod to Trent's Last Case there are also multiple complications when two characters protect one another believing each committed the murder. Evidence is manufactured and red herrings are strewn about the hotel like confetti at a carnival. Confusion rains down on all but the vainglorious Huberman who makes one insightful observation that leads to the truth and the murderer's identity.

Casares and Ocampo are no stranger to genre fiction. He and his wife were leading practitioners of fantasy, science fiction and magical realist short stories and novels. With his good friend Jorge Luis Borges as partner Casares created the fictional detective Don Isidro Parodi, a sort of parody of Poe's Dupin, who solved puzzling crimes from his jail cell. Casares' best known work is The Invention of Morel, a phantasmagorical novel of identity, illusion and love set in a surreal island paradise.  Ocampo's work is discussed in Levine's informative and teasing introduction. Living in the shadow of her better known and respected sister who founded and owned one of Argentina's most important literary magazines, Silvana wrote short stories that their intimate friend Borges said were imbued with "a strange taste for certain kind of innocent and oblique cruelty."  Levine says Ocampo's work is "more perverse" than her husband's and "surreal in the sense of inexplicable." Tantalizing descriptions to me and I'm eager to track down a volume of her stories now.

Where There's Love, There's Hate was reissued in English for the first time last year by Meville House Publishing, a Brooklyn based independent press, as part of their Neversink Library.  This imprint line revives a variety of eccentric novels and works of non-fiction from world literature.  Ranging form Charlie Chaplin's autobiography to a Russian novel about a life in a Gulag camp told from a guard dog's point of view (Faithful Ruslan by Georgi Vladimov) the series is one of the most impressive collections of overlooked yet pertinent literature to be assembled and reissued by any small press.  Check them out, but most especially make sure to check out this unusual satire of detective novels.

This counts as my translated book (space E3) in the Golden Age Mystery bingo card reading challenge.  Also, this is the book that inspired me to choose 1946 for Rich Westwood's continuing Reading Challenge in which we all read books published in a particular year.  His post of books read and reviewed will appear at Past Offences at the end of this month when the 1946 Challenge ends. 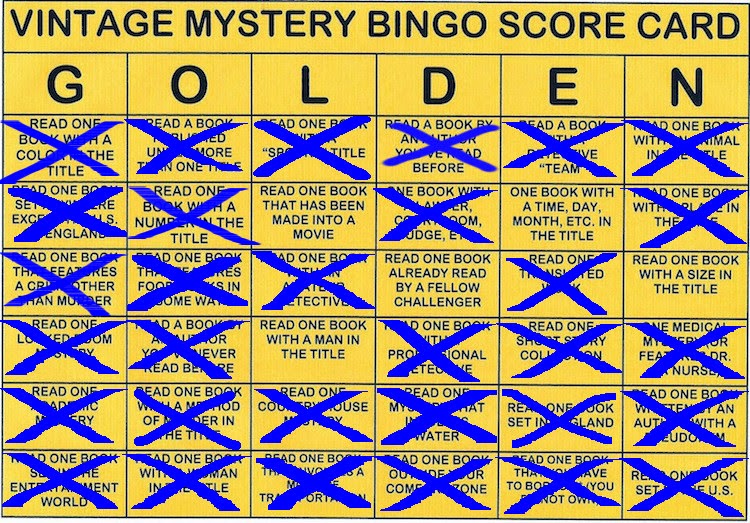