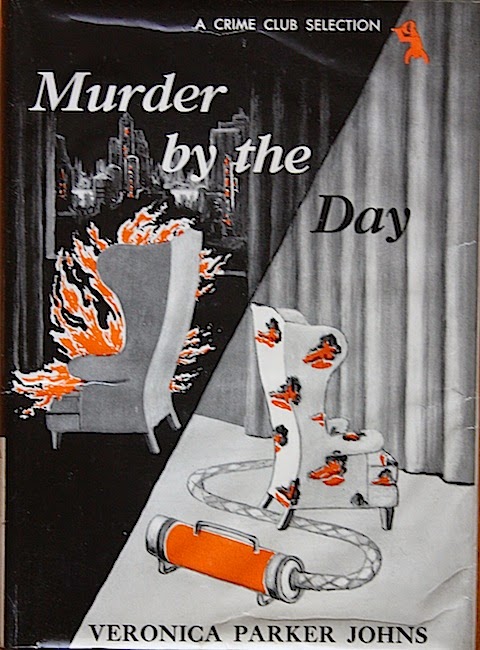 In the opening chapter of Murder by the Day (1953) we learn that Mortimer Rutherford, a millionaire with a morbid fear of dying in an inferno, has completely fireproofed his penthouse. How then was he found incinerated in his newly purchased designer armchair? A chair, that like the rest of his home, was most recently treated with a new fireproofing compound he helped develop with a chemist friend. Furthermore, Rutherford's interior designer, Althea Tamblyn (one of the more colorful characters in the book), had also purchased several of those chairs for other tenants in the building. Mysteriously, the chairs keep turning up in the oddest of places. Murder by the Day might well be subtitled The Case of the Flip-Flopped Furniture along the lines of an alliterative Perry Mason title. It's well suited for the Mason series for just like Gardner's obsession with switching guns and bullets in the Mason books Johns has her characters switching and moving those chairs around the Rutherford House apartment complex with the rapidity and deftness of a con man running a shell game.

But it isn't just the bizarre murder method that makes Murder by the Day worth your while. Webster Flagg, ex-performer whose talents on the stage took him from the vaudeville circuit to Shakespearean repertory, is the Rutherford's butler and housekeeper who also is employed by several other residents at Rutherford House. Flagg is the amateur sleuth of our piece, the only actor turned butler turned detective I know of in the genre. Oh, but he's also one of the earliest African American amateur detectives in the genre, too.

Beating out both Ed Lacy's private eye Toussaint Moore who first appeared in 1958 and Chester Himes' policemen who debuted in 1957 Webster Flagg is perhaps the first of the modern amateur black detectives. But unlike Lacy's and Himes' creations you'll find no tough guy demeanor here. Flagg (two G's, please, if you don't want to unduly upset him) is a sixtyish gentleman in every sense of the word, restraining himself with the suavity of Jeeves, reining in his temper and never resorting to harsh words when he's taunted by his mercurial clients. Drawing upon his acting talents and his clever insights into his client's personalities based solely on how messy or tidy they lead their lives he makes for a formidable detective. Johns' characterization of a black servant in a very rich and very white environment makes for some enlightening reading. She makes her point especially in a flashback when Webster has to deal with one of his employer's frequent fits of rage and his repeated use of the "N word". Johns' handling of the scene shows only one of the many reasons that Webster is one of the most dignified and sophisticated of black detectives in the history of crime fiction.

This is a detective novel with all the goods on display. Johns' has a lively writing style with a talent for turning a phrase and incorporating clever wordplay. Sometimes a bit self-consciously clever ("...slip covering herself in a kennel of blue poodles flaunting magenta ribbons") or awkward ("Her second Gibson laced her stays."), nonetheless, her writing is always vibrant and alive, never dull. At times tongue in cheek, but never silly; deadpan serious, but never preachy, as when dealing with the subtle and insidious racism that shows its ugly face at key moments. Her women characters are more colorful than the men ranging from the harried Priscilla Taylor, neglected wife who discovers the body, to the smug and haughty decorator Althea Tamblyn to the dumb blond hick Margie Peters whose naïve country ways are typical of the kind of comic character you get in a crime novel set in urbane Manhattan. Even the temperamental Black Angus, Rutherford's pet cat, gets to shine and provides more than a few clues to the solution of the murder. But this is no cat mystery. Angus has a few scenes of importance and never takes center stage, thank heaven.

Let me not overlook the essential ingredients of any good mystery novel -- the detective work and laying out of clues. There is an abundance of both. A stolen house key, the cat in the dumbwaiter incident, Rutherford's collection of valuable Impressionist and abstract paintings, an ingeniously painted copy of a Cezanne, reading glasses found in a recipe file, and the game of musical chairs in which the furniture moves around in dizzying circles rather than the people are among the numerous puzzling events and clues Webster will deal with as he sorts out fact from fiction in this literal case of in flagrante delicto.

Not much is known about Veronica Parker Johns other than her writing career. In addition to only five detective novels -- two with a spinster detective named Agatha Welch, one stand-alone mystery, and two with Webster Flagg -- she wrote a non-fiction work about her unusual hobby of collecting sea shells titled aptly enough She Sells Sea Shells. A number of her short stories appeared in Ellery Queen's Mystery Magazine and she is perhaps best known for her story "A Gentleman Caller" which was adapted for The Alfred Hitchcock Hour starring Roddy McDowall in the tile role. A review of the second and last Webster Flagg mystery Servant's Problem will be appearing here soon. Stay tuned.

Reading Challenge Update: Golden Age Vintage Mystery Bingo -- space E2, "Book with a time, day, month, etc. in the title". Another Bingo line! And only four more books left to fill the card.
Posted by J F Norris at 10:43 AM