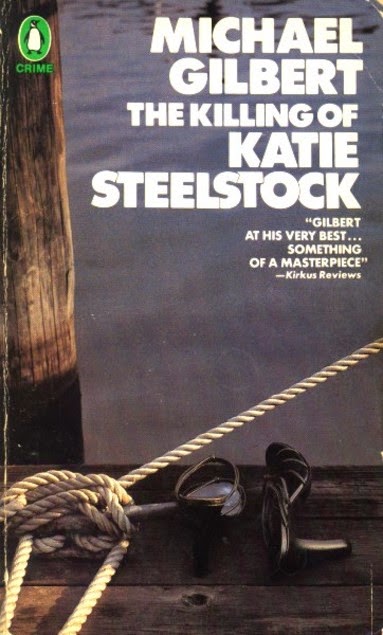 I'll have to restrain myself when writing this review.  I'd like to discuss just one aspect of this book at length. But if I did go into great detail then I would reveal one of its most devious parts. I noticed how Michael Gilbert turned his focus away from Superintendent Knott, who is meant to be the protagonist and lead detective, and suddenly spent a lot of time on a supporting character. I thought it a subtle but telling change in point of view. And it's doubly telling for his near genius method of misdirecting the reader while letting us follow this character's actions. Anyone who is looking for a top notch example of a thoroughly contemporary update of the traditional detective novel would do well to find a copy of The Killing of Katie Steelstock (1980), or as it is published in the UK Death of a Favourite Girl, a much better and suitably ironic title for the story. Gilbert didn't quite fool me, but he pulled off quite a few gasp inducing twists in the final chapters.

At first glance this novel seems to be a routine police procedural with a veritable army of coppers on the case. Scotland Yard, CID, local and area policeman are all enlisted to help solve the bludgeoning death of a local girl who has become sort of a reality TV star of the 1980s. She was well known for being a panelist on "The Seven O'Clock Show", a game show and had made several TV commercials as well. Another story of a local girl who "made it big" in the eyes of her hometown fans. On the surface Katie Steelstock is the "favourite girl." But her brutal death will lead to the truth of who she really was. The routine case becomes extremely involved and will uncover blackmail, suicide, sordid photographs and explode a houseful of skeletons in closets among the townspeople. Turns out the favorite girl was really rather a bad apple. And rotten to the core.

There are lots of crime novels that tell this story of a victim who appears to be good then turns out to be the opposite, but Gilbert makes his telling utterly fascinating from the get-go. We meet the entire town's population and learn of their relationships while they enjoy themselves at a dance. The young people pair up taking turns on the dance floor while the oldsters sit out on the sidelines watching and gossiping. Secret moonlight trysts take place, we listen in as old hens dish the dirt on the kids and their parents, and slowly realize that this town is seething with pettiness, jealousy and enmity. Something bad is bound to happen.

Lurking in the background is Jonathan Limbery, a volatile and outspoken young man who rants his opinions in a weekly newspaper. When he isn't mouthing off in print he is disrupting church services with his vehement accusations.  Limbery has amassed a following of young schoolboys who admire his rebellious nature and think he can do no wrong. They are eager to defend him when he becomes the prime suspect in the death of Katie. Seems he was not only outspoken in his political diatribes but was a jealous lover as well. The townspeople whisper their own accusations of what goes on in the boys' choir Limbery has organized with his coterie of young admirers.  And it isn't the choice of songs they're worried about.

My favorite parts of the book were the contrast between the rural police and the ultra urban but not so urbane Knott whose prejudicial views of country policemen are put to the test when they continue to outperform him during the investigation.  There are obvious biases from both side, but Knott is made to look a fool more than once.  Sgt. McCourt reads up on the use of plaster cast techniques so he can get the tire tracks and footprints at the scene of the crime just right but never lets Knott know.  Sgt. Shilling displays some surprising knowledge of women's cosmetics and deduces that the lipstick and eyeshadow in Katie's handbag can't be her own.  He even goes so far as to sample the shades on the back on his hand like a woman about to get a makeover.  Even quaint period giveaways like the use of a computer to ID a typewriter by its font and taking a matter of minutes rather than weeks got a few smiles from me. The book is filled with nifty touches like these.  Gilbert is constantly finding ways to subvert the reader's expectations and shake up the tired formulas of the standard whodunit.

Gilbert always finds moments of humor amid what turns out to be quite a sordid story of crime and base human indulgences.  Many of the characters have a sharp and biting wit and there are several zingers I could quote but they would fill up pages more on this post. Most surprising to me was a rare and compassionate depiction of a young gay teenager's secret desires and the tragic aftermath that follows a brazen declaration of love.  The Killing of Katie Steelstock is a rarity in crime novels. Satirically funny on one page, a few pages later shocking the reader with descriptions of seamy activities, further on it tugs at your heartstrings or elicits a pang of grief. Gilbert works his way through a gamut of raw human emotion in this very fine novel that works both as a mystery story and a mainstream literary work.  Highly recommended for those with discriminating taste.