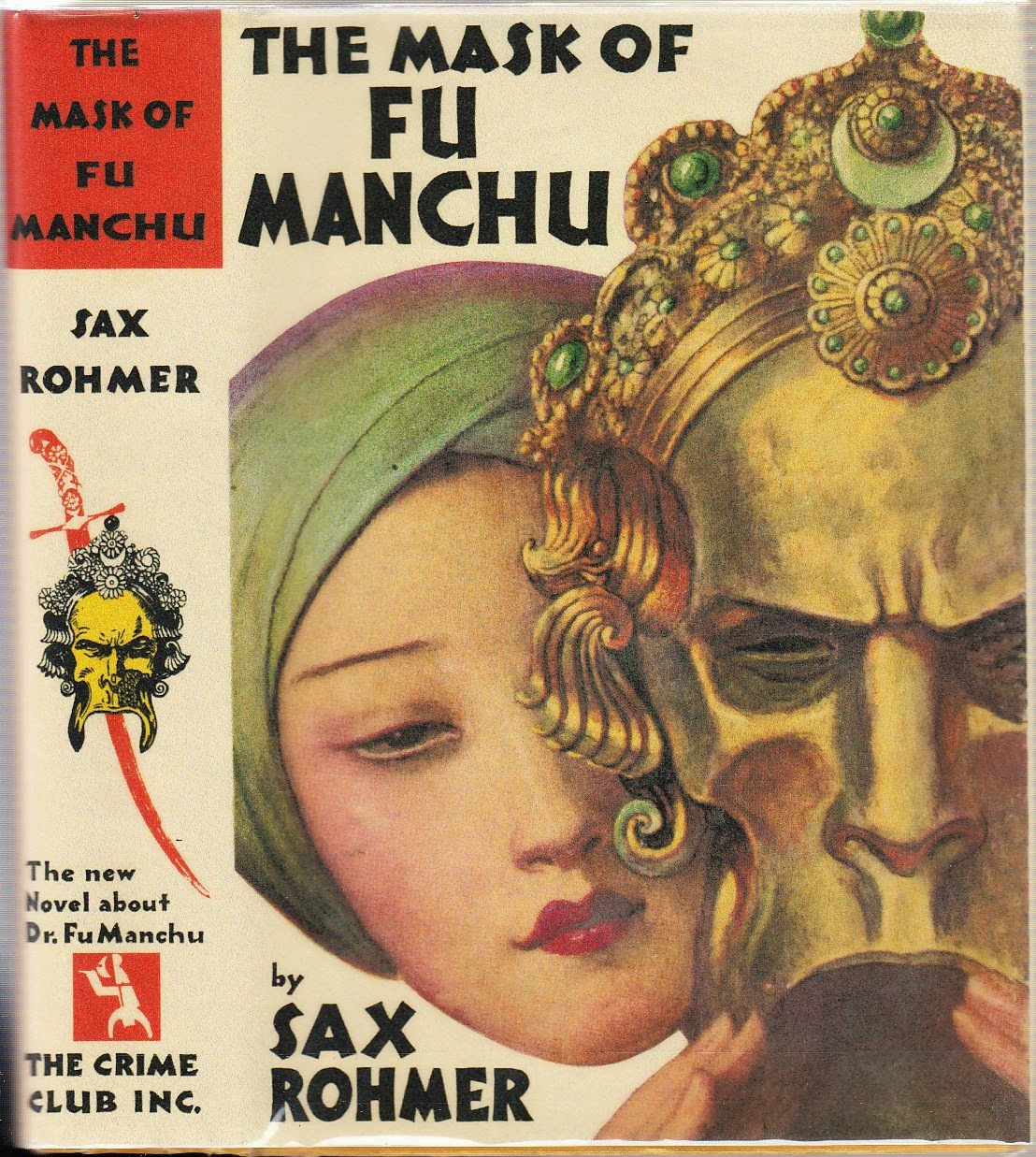 Sax Rohmer never ceases to amaze me. For a writer who arguably created fiction's most infamous master criminal and indulged in some of the most macabre aspects of sensation and pulp fiction (some have never surpassed him in my opinion) he also managed to use the thriller as his sounding board for his political views. Am I reading too much into this in light of the recent headline making news of the events in Syria, Iraq and Afghanistan? I don't think so. The Mask of Fu Manchu (1932) seems exceptionally pertinent now in light of recent world affairs. It gets my vote for one of the earliest thrillers dealing with religious fundamentalism as a platform for terrorist activity.

A British archeological expedition in Iran comes to a halt with the discovery of the murdered body of Dr. Van Berg. The only entrance to his hotel bedroom was the open window thirty feet above ground and yet no ladder could have been used to gain entry without any seen or heard it being done. Adding to the mystery of how the assailant entered the room so swiftly and silently is the aroma of mimosa that pervades the room. A strange nearly intoxicating scent that lingers in the air adding an exotic mystery to the murder scene so typical of Rohmer's books. 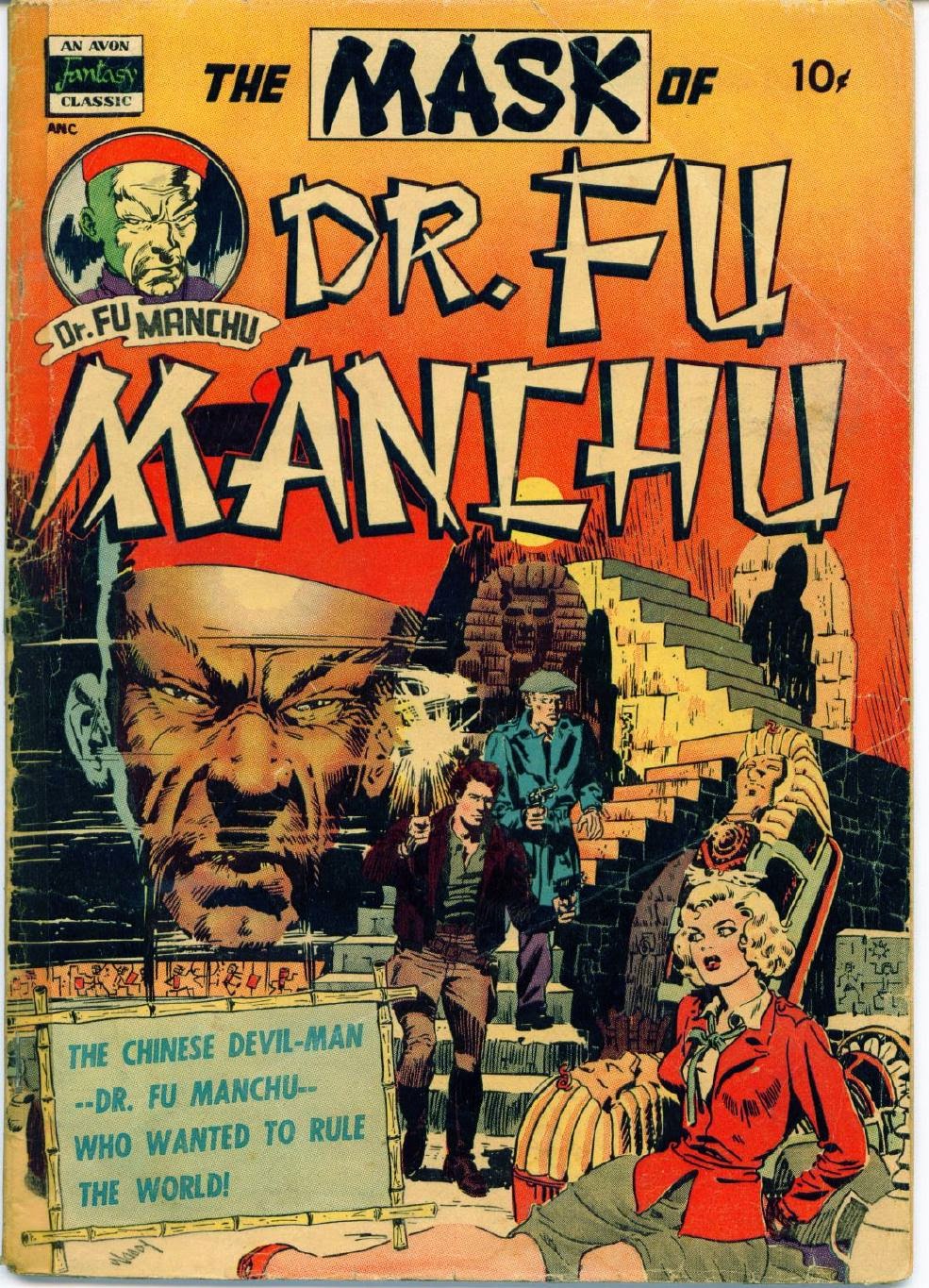 Local authorities get word that the expedition is honing in on the site of ancient artifacts belonging to the revered Muslim El Mokanna, known also as "The Veiled Prophet" though someone is quick to point out that this is a misnomer for El Mokanna actually wore a mask. It is the mask, sword and tablets purportedly carrying the text of the New Koran that are thought to be the reason for Van Berg's death.  His murder is viewed as a fatal warning to the crew to stop their digging and searching. Sir Lionel Barton, "the greatest living Orientalist in the Western world", will have none of it. He continues with his work and succeeds in finding those treasures. And then the trouble really begins.

Mask of Fu Manchu is narrated by Shan Greville, Barton's right hand man on the expedition. He is looking forward to ending this project so he and his fiancé can return to London and get married. Anyone who knows anything about books like this immediately knows this love affair will be targeted by the nefarious Fu Manchu and his minions. No sooner does Rima appear but she is threatened and eventually kidnapped. By her own husband to be! Greville himself is abducted when he is tricked into following a figure wearing what appears to be El Mokanna's mask. Turns out it's Fu Manchu's deadly and beautiful daughter Fah Lo Suee. Greville meets up with Fu Manchu, is restrained by some dangerous African servants, and drugged with one of Rohmer's ubiquitous mind controlling opiates. A drug distilled from the seeds of the mimosa pudica has been used to anesthetize Greville which he quickly associates with the botanical aroma back at the murder scene. We also learn that Fu Manchu has been preparing an elixir of life derived from a rare Burmese orchid. An essential oil created from the flower is the secret ingredient in the formula that has prolonged his life and bestowed an ageless appearance.

You can only marvel at the sheer excess of this story. Fu Manchu is once again aided by a veritable army of Asians, Africans and Muslims all with athletic agility and superhuman strength. In addition to an array of exotic poisons and mind controlling drugs there is a super strong cord created from spider silk that is used as a weapon, a restraint and as means of travelling between the balconies and rooftops of high-storied buildings. Did Stan Lee read these books, too? You can't help but think of Peter Parker's inventions when you get to this part.

Sir Denis Nayland Smith and Dr. Petrie, of course, make an appearance and are on hand to save the day as they do battle with their perennial nemesis. The story travels from Iran to Cairo to the interior of the Great Pyramid of Giza where another impossible event occurs. From Egypt our intrepid band travel via ocean liner back to London where the climax reveals Fu Manchu's real plans for world domination using his duped zealous followers of El Mokanna.


I haven't read a more breathtaking, high speed chase, action thriller like this in a long time. It's no wonder the wizards of Hollywood were continually drawn to these books as a source for the good ol' fashioned cliffhanger serials of the past. Oddly, the movie version of The Mask of Fu Manchu is even more over-the-top than the book. Gone is all of the religion and quasi-politics. The emphasis is not on zealotry, the dangers of blind faith, and how easily it is manipulated for ill purposes. Instead, the mask and tomb belong to Ghengis Khan and we get an abundance of pulp thriller trappings as indomitable Boris Karloff and ethereally gorgeous Myrna Loy, portraying the evil father and daughter, play havoc with our heroes' lives and threaten world peace. Rohmer's love of botanical poisons and drugs are not surprisingly replaced with an arsenal of venomous creatures. Too strange is the torture sequence in which we watch handsome and rugged Charles Starrett as Greville (renamed Terence Granville in the movie) stripped naked and strapped to a table while Karloff looking like an insane surgeon in his mask, gown, and gloves subjects his victim to injections taken from giant spiders and snakes. And Greville isn't the only victim. The entire band of archeologists is captured and restrained in a variety of old movie torture devices from spiked moving walls to a pit of alligators. 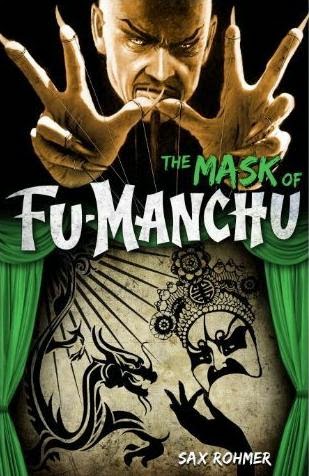 As of March 2014 Titan Books has now reprinted eleven of the thirteen Fu Manchu books. Luckily, The Mask of Fu Manchu is one they chose to include. It's available in paperback from most retailers in the UK and US. For those who prefer the older editions, you can find multiple copies of the many US and UK vintage paperbacks available through the used book market, usually for sale at $7 or less per copy. This book review serves as my contribution to the "1932 Vintage Mystery Reading Challenge" sponsored by Rich Westwood. Visit his blog Past Offences to read more posts on books others found of interest from this exceptional vintage year.
Posted by J F Norris at 11:10 AM