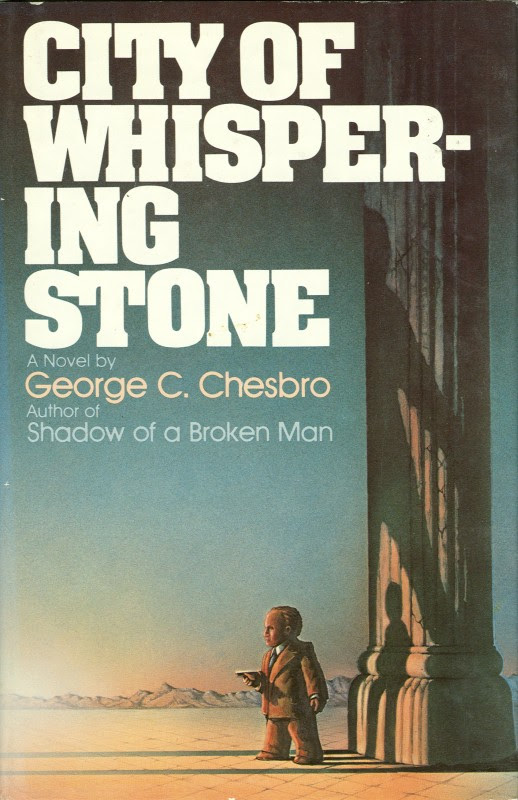 Robert "Mongo" Fredrickson is a criminology professor at a New York university who also dabbles in sideline work as a private eye. In his second adventure a missing persons case leads him to the drowning death of another private eye, the revelation of an underground of Iranian secret police living in the US and a rebel organization led by an outspoken Iranian college student living in the US. If this sounds more like a spy novel than a detective novel you get a gold star. It is. But it's an exciting and well told spy story uncovering the often misunderstood world of 1970s Iranian culture and politics.

The Mongo books are probably the most cultish of all contemporary crime novels from the late 1970s-mid 1980s era. Never really big sellers when first published they were nevertheless admired and read by an enduring fan base who appreciated the books for their fascinating blend of occult, supernatural and science fiction elements built around the structure of a traditional hardboiled private eye novel. Chesbro was the first to do this with a series character and his books continue to be more interesting and original than any of the crop of paranormal mysteries and "urban fantasy" we are now inundated with. I haven't mentioned the most intriguing aspect of Mongo himself because by now the you can read about him all over the internet. He even has his own tribute website called DangerousDwarf.com. You see Mongo the Magnificent, as he was once known, is a ex-acrobatic dwarf who performed in the internationally renowned Statler Circus.

City of Whispering Stone (1978) refers to Persepolis, the ancient capital of Persia, where amid the ruins of that former glorious city the climax of the book takes place. But we start first in New York when Mongo's former employer Phil Statler asks for the criminologist's help in locating the circus' missing strongman, Hassan Khordad. Mongo reluctantly takes on the case and then asks his brother Garth, a Manhattan cop, to check the files of missing persons. Garth in turn asks Mongo if he happens to know a private eye names John Simpson. Mongo denies knowing him but wonders why Garth mentions him at all. Turns out the other P.I. has turned up dead under mysterious circumstances. It may be murder.

Of course Mongo will soon learn that Simpson and Khordad are amazingly linked through a second disappearance -- that of Iranian student Mehdi Zahedi, a key figure in anti-Shah politics who is raising awareness on US soil of the corrupt police state in his native country. Mongo's search for Khordad becomes a search for Zahedi and when a violent near fatal confrontation in a Persian antique store lands Mongo in the hospital and leads to the death of an innocent friend he is determined to find the answers to what increasingly appears to be a worldwide conspiracy.

This espionage plot is atypical of the Mongo books and I was slightly disappointed that there was nary a hint of the weird and the eerie events that populate the other books in the series. No signs of psychic phenomena like telekinesis and telepathic healing as in Shadow of a Broken Man (1977), no grimoire or black magic addicted professor as in An Affair of Sorcerers (1979) . But this was after all the very first book written in the series, though it was the second to be published. Chesbro was still trying to find his way around the character and playing with unusual themes. The series doesn't really take off into the stratosphere of weird and outre until the fourth book Beasts of Valhalla (1985), often called the absolute best book in the series.

City of Whispering Stone seems to be a very personal book that Chesbro needed to write in order to move on and make Mongo the thoroughly original character beset with all manner of strange and weird. He dedicates to the book to Ori "who loves the land so much". I can only think that this book exists so that Chesbro could dispel the mythology and cut through all the propaganda about Iran that we were being fed via US news reports on an almost daily basis back in the late 1970s. Clearly he had some dear friends who were Iranian who helped him with the background.

Those interested in learning more about George C Chesbro, who sadly died back in 2008, ought to visit the excellent tribute website Dangerous Dwarf where you will find full bibliographies of all the Mongo books and other crime novels Chesbro wrote, a gallery of book covers, a page full of links leading to author interviews on the web, and other interesting tidbits about the writer and his work. There are stories on the internet reporting that Peter Dinklage will soon be appearing as Mongo in an HBO produced mini series. I can't imagine anyone more suited to play the part and I'm hoping that the movie will be made and aired soon.

Reading Challenge update:  This book fulfills space S5 "Academic mystery" (students and professors galore in this one) on the Silver Age Bingo card.
Posted by J F Norris at 10:36 AM