WARNING: This post is loaded with SPOILERS. Stop now if you know nothing about Laura, the book or the movie, and don't want its most unusual surprises given away.

Not such a forgotten book, I guess. The movie is definitely not forgotten. But can you believe that although I've seen the movie about seven times by now, and know it inside and out, I have never read the book until just this past week? It's true.

Reading the book was a revelation; so drastic are the differences. I felt like I was discovering Laura Hunt, Waldo Lydecker, Mark McPherson, Shelby Carpenter and Susan (not Ann ) Treadwell for the first time. I was taken aback by the major changes made in the classic film adaptation of Laura (1942). Changes that seem vital to Caspary's recurring themes of ideals of masculinity and femininity, the worship of beauty both in objects and people, and exploitation of character flaws and human weakness. I learned so much about this story, how it came into being, its origin as a doomed play that never saw a Broadway production and the perhaps by now famous argument Caspary had with Otto Preminger over one key scene in the film that she felt ruined her intent in writing the book in the first place. The biggest revelation to me is that Laura, the novel, is so much more than just a detective novel. Caspary uses the investigation of a horrible murder to explore complex human emotions and unusual psychology of obsessive love and does so with grace and artistry that is at times breathtaking.


First and foremost are the differences in the character of Waldo Lydecker, the highbrow newspaper columnist and cultural mentor of Laura Hunt. Clifton Webb captured so perfectly the essence of Waldo in the movie but in terms of look and physique he's all wrong. Waldo Lydecker would have been better played by Edward Arnold with a beard and spectacles. Caspary's Waldo is tall, obese and astigmatic. Much as she disavowed using celebrity columnist and radio personality Alexander Woollcott as a model for Waldo the similarities are hard to ignore. Apart from the amazing coincidence of their looks Lydecker and Woollcott are both interested in writing about true crime. The only contrast between the two is that Waldo Lydecker confesses in the very first chapter a complete distaste for detective novels and Woollcott was known to devour them. He even acted as mystery selections editor for the cheap reprint publisher White House during the 1940s.

Secondly, Shelby Carpenter is supposed to be blend of Nietzschean Superman and mythological Adonis. Vincent Price was a handsome and dapper fellow in the movie but not the kind of rugged and athletic Shelby that Caspary created. The words "gentleman" and "gallantry" are liberally used to describe Shelby, Laura's unfaithful fiancé, but as the story progresses we learn that he is as corrupt and exploitive as Waldo and in more insidious way. Unlike Waldo who uses artifice and banter as a mask for charm Shelby's charm is authentic yet he uses it deviously and dishonestly. He also wavers between self-delusion and cognizant disingenuousness as he tries to convince Laura that he really has her best interests at heart, that he is trying to protect her from a malicious cop out to convict her of a violent crime.

The novel's underlying strength, one that allows Caspary to delve deeply into each of her absorbingly complex characters, is the use of the multiple first person narratives. When Caspary was planning to turn her failed playscript into a novel she was given a bit of remarkable advice by one of her screenwriter friends in Hollywood who suggested she look to The Moonstone by Wilkie Collins as her framework. All those insightful analogies to Collin's pioneer detective novel are 100% accurate. She really did model her book on Collins'.

Caspary's language and the notable stylistic differences in the various points of view are the highlight of reading the book. Movie dialogue alone cannot begin to convey the richness we get when we hear the characters speak their thoughts in their individual manuscripts. We have the caustic wit, surface urbanity, and self-indulgent prose of Lydecker who lets us know that the only person he loves more than Laura is himself; McPherson's ordinary Joe section is peppered with American idioms and slang but absent of the high society vulgarity he disdains ("It takes a college education to teach a man that he can put on paper what he used to write on a fence."); and Laura Hunt's near neurotic ravings in diary format in which she confesses her love/hate relationship with all the men in her life, a tortured intelligent woman trying to reinvent herself as a career girl in a high paced advertising firm who is in conflict with her private self. A driven and focussed woman in the workplace she gets her job done with little distraction. But when left to her own thoughts she confesses "...my mind whirls like a merry-go-round" as she finds herself at the mercy of master manipulators who have designs on her soul, her body and her money.

At its core Laura is a study of the mystery of love in all its forms. Coming into play throughout all these narratives are varying viewpoints of idealized beauty (both male and female), authenticity of character, questioning gender stereotypes and ideals of manhood and femininity, and a incisive portrait of how weakness and character flaws can be the ruling emotions in the world of love. While there are examples of too obvious symbolism (Waldo's smashing of a glass vase in an antique store and the secret hiding place of the murder weapon -- completely different than the absurd object used in the movie -- being the most heavy-handed) Caspary still manages to tell her story with a wisdom and compassion and depth that can be movingly profound. To have seen the movie is not to know this story of Laura. I urge you to experience the mystery of Laura Hunt and her world by reading the novel. Laura is a rare instance of a book and a movie achieving classic status each in their own right.

**Many thanks to a couple of faithful readers who sent me text files from the cached versions of the original post. Just like the novel here is the resurrected Laura!  [Note to self: Back-up and save all posts in the future.]

And here are the original comments I managed to save from the December 5th cached version: 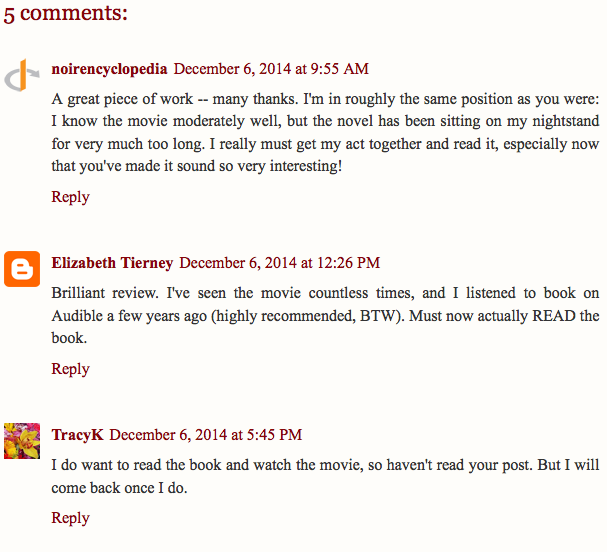 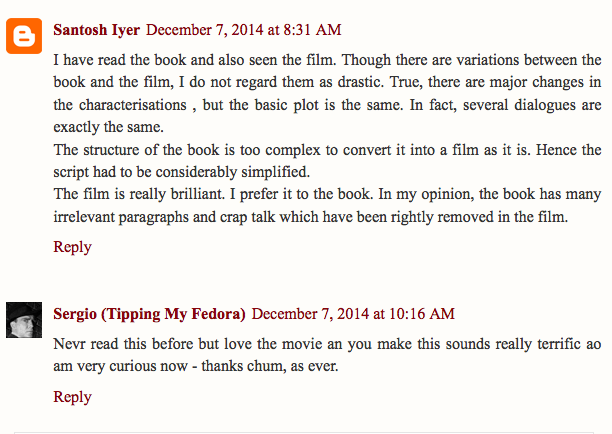