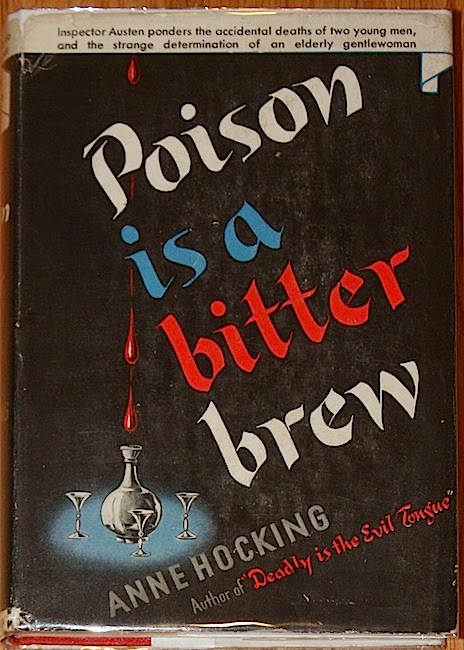 When Doubleday's Crime Club decided to market the books of British mystery writer Anne Hocking they chose to draw attention to her literary quality rather than the plot of her books. Her first book published in the US, Deadly Is the Evil Tongue, had this unusual disclaimer on the DJ front flap: "...if you want blood and thunder, guns roaring and daggers dripping gore, don't read this book." (The italics are theirs.) They went on to discuss what wasn't in the book rather than what was and that Hocking would appeal to the reader who is "truly discriminating...who prefers finesse to fury." The same might be said of her second book to be published in the US Poison Is a Bitter Brew (1941). Not only did Doubleday draw attention to Hocking's consummate finesse in storytelling they changed the original pedestrian, far from enticing title of Miss Milverton to one that would clue a prospective reader to the Borgia-like proceedings within.

Anne Hocking is another of the many second tier mystery writers who, when she put her mind to it, could concoct a murder tale populated with fascinating characters and perplexing events without a shred of fanciful gadgets, quirky antics from an eccentric detective or any other froth that tends to make a lot of people turn away from detective novels of the early 20th century. Poison is A Bitter Brew is one smart, calculating and thoroughly engrossing story.

All this came as a surprise to me because the plot sounded very run-of-the-mill. At the heart of the story you have your basic "Who killed the heirs?" tale and one in which money seems to be the underlying motive for a series of poisoning deaths. But which death is an accident and which is murder? And could one of them actually be a suicide? This is all left up to Chief Inspector William Austen to discover as he infiltrates the repressed household of Augusta Milverton and her odd group of relatives. There is a restrictive legacy attached to the Milverton estate and Augusta is forced to deal with its misogynistic instructions from her long dead, woman-hating father. The Milverton money can only be passed down through the male lineage as outlined in her father's will and Augusta, one of these familiar "spinster for life" women we encounter in detective fiction, is not happy with the group of nephews who are her immediate relatives nor how they line up in their chronology. Charles Temple, the youngest, least responsible yet the most appealing of the nephews is her favorite. She would like him to be the primary legatee but cannot change her will thanks to the legal entanglements created by her father. She is stuck with the philandering dullard George Hayle, the oldest and first in line to her fortune followed by the asexual and aloof Osbert Garstin. Neither earn much respect or affection from Augusta. 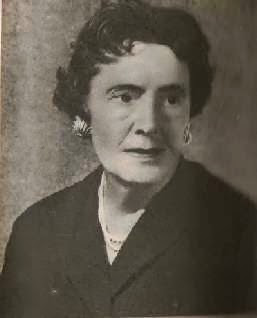 When the nephews start dying from mysterious causes, possibly poisoned, the immediate suspect is Charles Temple. But no one in the household nor the town can believe such a likable young man, so full of life and personality and good humor would ever contemplate murder. Augusta refuses to believe her favorite nephew would dare harm anyone. she reminds Inspector Austen that Charles is much too preoccupied with his current love affair with wealthy vivacious Anstice Castle whose father is making Charles' proposed marriage plans very difficult. He needs to come up with an income to match Anstice's exorbitant lifestyle before her father will consent to anyone marrying her. A watercolor artist with barely £500 per month to his name is hardly a desirable son-in-law. Mr. Castle sees Charles as nothing but a fortune hunter. And the police think this may not be too far from the truth.

It's all very familiar, isn't it? Hundreds of detective novels have been written revolving around this timeworn plot. But Hocking makes the story immensely readable. The characters are so well drawn from the usual garrulous and devoted servant Tamsin, who knows all and intuits more, to the central character of imperious Augusta Milverton. Even Austen has some traits that raise him out of the middle ground of second rate detectives. Hocking who comes from a literary family also has fun with literary allusions. The characters quote from poetry and literature, there are references to detective fiction with Poirot and Lord Peter Wimsey name-dropped at two key points. One notable highlight: Austen lectures his cohort Sergeant Pendarvis on the merits of reading detective fiction. He says the books remind him of what many policemen tend to forget is key to crime solving -- "the insistence on the importance of the human factor." Hocking believes this wholeheartedly as well. As the story progresses in Poison Is a Bitter Brew Hocking increasingly focusses on the complexity of the "murderer personality" as she has Austen call it. He comes to the astonishing conclusion based on evidence and circumstance that there are most likely two killers in the house, both of whom share a similar psychological make-up. Family devotion takes on a far serious note and characters flittering about in the shadows will advance to center stage in an eyebrow raising denouement that mixes justice with sorrow.

Anne Hocking's books were mostly published in the UK with a only a few titles receiving US editions. Of all her books Poison is A Bitter Brew seems to be the most easily found. It's the first book I've read of hers and according to her bibliography the third of her detective novels featuring Inspector Austen. Though on the surface it may appear to be a tale all too often told in Hocking's capable hands this story of money and love, greed and desire, is carried off with panache and grace.

I've knocked another title off my Golden Age Vintage Mystery Reading Challenge Bingo card. This one fits space O5 - "Method of murder in the title". Trying to get this card filled by October 15. Think I can do it?
Posted by J F Norris at 10:56 AM