Roger Pilgrim is in fear for his life. He has already barely escaped two near fatal accidents in his ancestral home of Pilgrim's Rest. The home seems to be plagued with accidents. His father recently died when his horse threw him to the ground in a strange fit. Roger thinks someone is trying to prevent the sale of Pilgrim's Rest and most likely taking advantage of a family curse that states all members of the Pilgrim family must remain in the house or face Death if they ever leave. Roger has asked Maud Silver to investigate the possibility of a devious murderer hiding among the residents of the home.

The plot of Pilgrim's Rest (1936) is rather involved. Unfolding simultaneously with the story of Miss Silver's investigation is the story of Judy Elliot who has been forced to take the position of housemaid at Pilgrim's Rest. And there is the story of the Pilgrims themselves -- sisters Columba and Janetta, their invalid brother Jerome -- along with the employees and servants, Jerome's ever watchful nurse Lona Day, butler Robbins and his wife the cook. Miss Silver does some legitimate detective work, but mostly uses intuition to get to the bottom of the deadly accidents and mysterious deaths that befall the Pilgrim family. She coughs repeatedly, alternately as an irritating sign to underscore her impressions or to interrupt when she disagrees with Inspector March. When she's not coughing she's sitting in her chair clacking away with her knitting needles making a sweater for a relative and taking in all that is said. Periodically, she will cough (once she does so "in a hortatory manner"!) then make an observation that no one the book ever thought of.

This was my introduction to Patricia Wentworth and her well loved spinster private detective. While I was impressed with the plot mechanics and the unusual way the story unfolds I have to say I didn't find Miss Silver all that endearing or even much of a real detective. She has an almost psychic ability to ferret out the truth. Frank Abbott, one of the policemen, goes so far as to liken her to a witch. But Inspector Marsh gives a more accurate assessment of her detective skills being linked to keen observations of human behavior and Maud's ability to become an "insider" rather than an outsider as policemen are viewed. March tells Abbot, "...by the time we come into [the investigation] everyone concerned is hard at work covering up. We don't see people being natural -- she does." Maud reminds me of the Coles' Mrs. Warrender, another elderly woman detective who has uncanny powers of observation who puts her policeman son to shame.

Things I found pretty darn good about this book:

1. The use of cannabis indica as a method of drugging one of the characters in order to control him. In effect, a form of marijuana poisoning.

2. The construction of the house, especially a glass enclosed walkway that leads from the house to the street, being integral to the solution of one murder. Reminded me of John Dickson Carr's obsession with architecture.

3. A subplot involving the story of the daughter of the butler and his wife that becomes the key to the entire book. It's cleverly introduced to the plot as background but it keeps intruding throughout Miss Silver's investigation. By the climax of the book this subplot actually becomes the main plot, an impressive narrative manipulation. Plus, there are some nicely done bits of misdirection in telling of the daughter's plight culminating in one huge surprise.

But in the end the detective novel aspect of the story gives way to a ridiculously melodramatic finale and the book turns into a kind of unintentional parody of a Sydney Horler thriller. The killer kidnaps Judy and at gunpoint forces her to drive them to a remote site in the countryside (see the illustration on the paperback at the right). For about four pages of Judy's driving the killer narrates the motives behind the crime and plans for Judy's eventual death now that "she knows too much." There is a spectacular car wreck, a pursuit on foot and a shoot out. Too much indeed! As if that isn't going overboard the killer escapes yet the unflappable Miss Silver does not admit defeat. She gives Inspector March a few instructions on how the police can identify the killer who she is sure will have adopted a specific disguise and is planning to leave the country. Maud Silver guesses and surmises too much for me. 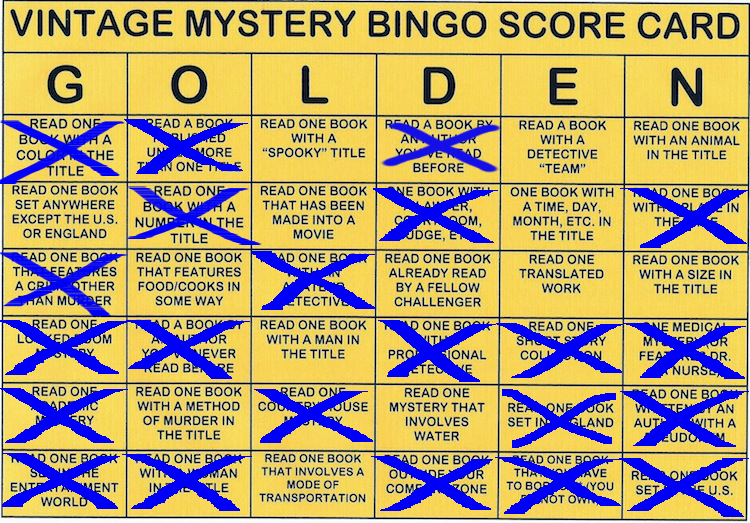