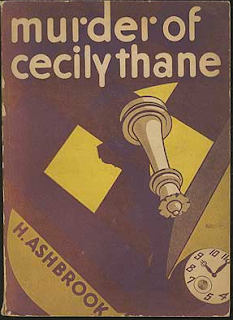 If it hadn't been for an unmentionable book by a writer known only by his initials Harriette Ashbrook might never have become a mystery writer. Just as Agatha Christie was inspired to pen her first novel by reading a poorly written detective novel Ashbrook in a newspaper interview done in 1933 confessed, "I owe it all to T.S. Fine literary style is discouraging to the beginner. It's better to read a terrible piece of tripe and get encouraged." Whatever that book and whoever T.S. might be we have to thank him for the creation of Ashbrook's ne'er-do-well amateur detective Philip "Spike" Tracy.

We first meet Spike Tracy in The Murder of Cecily Thane (1930) and he's a near twin of Philo Vance, who at the time had only appeared in five books. Tracy has got a playboy's philosophy of life, appears to be utterly hedonistic, has no job, and thinks becoming an amateur sleuth might be rather fun. The main difference between Ashbrook's detective and her obvious inspiration is while Vance loves to lecture ostentatiously on esoteric topics like Chinese pottery and ancient Egyptian burial rites Tracy is more down to earth, keenly observant but also a smart aleck. Tracy notices things the police overlook and enjoys pointing out their faults without ever appearing snobbish or patronizing as Vance often is.

Tracy has a brother who is the Manhattan District Attorney. R. Montgomery Tracy is his professional name as it is painted on his New York office door. The R stands for Richard and thankfully he doesn't go by Dick. As Vance has Markham and Sgt. Healy and Ellery Queen deals with a D.A. and his policeman father Tracy is paired with his brother and Inspector Henschmann.  For good measure Ashbrook supplies a medical examiner bored with his job who displays the requisite black humor when examining the many corpses that turn up in the series.

...Cecily Thane is fairly traditional compared to Ashbrooks' later novels featuring Spike Tracy. The victim is the unliked young wife of an older man who allowed her to go out regularly with a "dancer" named Tommy Spencer. Mrs. Thane is found shot in her bedroom with a safe open and robbed of jewels. Turns out another woman was robbed and killed earlier and she too was seen in the company of a dancing gigolo named William Preston. Is there a criminal gang of male escorts turned thieves and murderers?

There are some unusual aspects to the criminal investigation like the search for the murder weapon which was disposed of in an odd manner and turns up in a most unlikely place. Also, a blotting paper clue is reproduced in the book and allows the reader to hold it up to a mirror in order to read the message thus getting a feeling of joining Tracy in his sleuthing. But the cleverest part is that the entire crime hinges on an altered timepiece. Ashbrook's insightful observations about the difference between actual time and perceived time make for one of the more modern features of the story.

She followed her debut with The Murder of Steven Kester (1931) which fans of obscure B movies may know in its cinematic adaptation known as Green Eyes. The movie turns up all over the internet these days as it was released by one of the bargain basement video outfits that churned out hundreds of DVD cheapies of movies now in the public domain. A murder takes place during a masquerade party held at the Long Island mansion of the title character. Kester is dressed as Bottom (from A Midsummer Night’s Dream) complete with donkey's head. Tracy comes as a gladiator in an abbreviated costume consisting only of a tiger skin loincloth. When he goes in search of a safety pin in order to prevent an accidental charge of public indecency he stumbles upon the corpse. Ashbrook's offbeat sense of humor and her tendency to be a bit risqué is on flamboyant display in this book. Like many scenes added for comic effect in her books seemingly insignificant minutiae will take on greater importance when the crime is fully explained.

Her plotting is original but her execution is sometimes faulty. There are some great clues like the evidence of something having been destroyed in the furnace of the Kester home, a suspect's past life as an actress, and a pair of dice that turn up during a scene involving an ostensibly extraneous crap game -- yet another "big clue" disguised in a scene of minutiae that helps Tracy solve the murder. But while the reader is presented with all of this Tracy still withholds some important data. Too much offstage action in this story for my tastes, too many scenes when Tracy goes away and we have no idea what he does until pages later in the denouement. 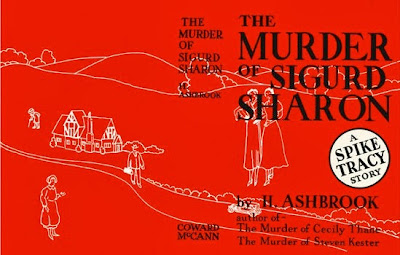 Ashbrook starts to experiment with unusual themes in her next two books. In one book she touches on abnormal psychology and uses some groundbreaking research in a rather daring surprise reveal while the other gives her a chance to discuss the lonely life of World War 1 veterans, their often tortured lives, and the private demons they must learn to deal with back home far from the brutality of the front.

The Murder of Sigurd Sharon (1933) shows considerable improvement from her first two detective novels. Tracy is on his own in this outing which takes him to the backcountry of Vermont. Ashbrook does an excellent job with misdirection and even manages to include an impossible disappearance. For the 1930s this was probably an astonishing mystery with a gasp inducing, surprise ending. It deals with twin sisters -- Mary, a bedridden invalid, and Jill, an extroverted, highly sexual young woman. Jill believes there is a plot to kill her. She enlists Tracy's aid to prevent her impending murder at the hands of her oppressive and odious guardian and his nurse, but the old man turns up dead first. And Jill is discovered standing over his body with the bloody weapon in her hand.

Though it may all become rather obvious to the 21st century reader Ashbrook must be commended for handling a topic rarely used in detective fiction of the 1930s. A rural Vermont sheriff mentions a well known Victorian novel in the final pages, perhaps the only familiar reference on the topic to a reader of Ashbrook's time. She handles the topic fairly well for a device that is now an overused trick in thriller and mystery fiction. I like ...Sigurd Sharon for its daring invention and its subversive depiction of a sexually free female character. 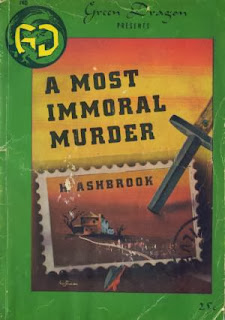 The theft of a valuable stamp collection, several murders and a handful of attempted murders are at the core of the elaborately constructed A Most Immoral Murder (1935). Tracy is back in Manhattan with the usual supporting characters from the police and D.A.'s office. He also makes frequent trips to New Jersey, notably the fictitious town of West Albion where a secret in the past is revealed to have a connection to the murders and the stamp collection theft. Ashbrook uses a murder investigation to draw comparison between wartime killing and murder in civilian life and has some very strong opinions about each and the effect killing has on soldiers. I found it to be her most mature work even if the plot gets a bit creaky with some old fashioned tropes involving adopted children that seem borrowed from Victorian sensation novels. The unfolding of events, however, is impressively done. The large cast of well drawn characters holds the reader's interest with the stamp expert being the most memorable of the lot.

Harriette Ashbrook wrote only seven novels using her real name then handful more under the pseudonym "Susannah Shane." The Shane novels are a blend of Mignon Eberhart style "women in peril" thrillers and all-out farcical comic crime novels like the work of Phoebe Atwood Taylor and Craig Rice. I prefer her work under her own name. 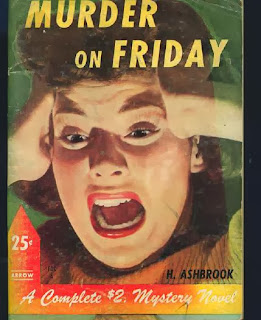 These days Spike Tracy is utterly forgotten. Sadly, so too is Harriette Ashbrook. I'd recommend tracking down any of her books -- they're entertaining, sometimes devious, and often very original for the time they were written. Spike Tracy was one of the better Vance impersonators but a lot more likable. As Ashbrook says of her own creation, "He's the kind of man I wish I could meet in real life."