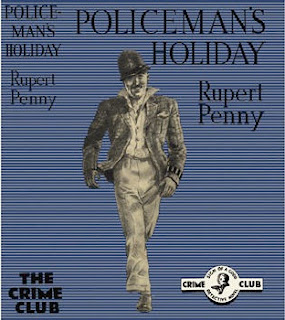 Though Rupert Penny only wrote a handful of books, all published by the esteemed Collins Crime Club, not a single one of his books was published in the United States during his lifetime. It took the ingenuity of Fender Tucker and Gavin O'Keefe, those very busy men over at Ramble House,  to resurrect these fiendishly clever, often preposterous, and genuinely baffling detective novels and allow American readers an opportunity decades overdue to read them.  Policeman's Holiday (1937) is the second of only eight novels featuirng the "talkative policeman" Inspector Beale and his Watson of sorts the financial reporter Tony Purdon. And it's one of the strangest detective novels I've read in a long while.

Rupert Penny is the adopted pseudonym of Ernest Basil Charles Thornett, a newspaper writer and cruciverbalist when he wasn't concocting incredibly complicated murder mystery plots. In Policeman's Holiday he decided to combine his two passions -- detective novels and crossword puzzles, or more accurately acrostics. The murder victim Bernard Pommery is a J.P., philanthropist, ex-publisher of novelty magazines and an acrostic enthusiast. His body is found hanging in Dillow Woods several miles from his home. In his pocket is an acrostic puzzle that has not one but two solutions (!) each of them providing the police with clues to the killer's motive and means. 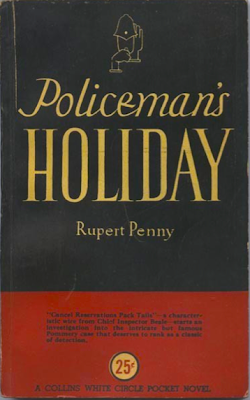 I'll forgo any attempt to summarize the intricate, multi-layered plot. Some readers may complain that this book is saturated in plot, that it's nothing but plot. I wouldn't quibble with that observation, but then there are an entire subset of detective novels that exist solely for the plot and the puzzle. Curt Evans has written about some of the better writers in his book Masters of the Humdrum Mystery. I'd class Rupert Penny with those "humdrums" as well. As a crossword puzzle constructor Thornett would naturally be drawn to writing detective novels in which puzzles and an abundance of enigmatic clues are integral to the story. His former life as a cryptographer in the British secret service no doubt also aided him in his puzzle-making abilities.

Policeman's Holiday is something of a tour de force in that regard. It's hard not to resist the pull of the puzzle from the moment the body is discovered hanging from the beech tree when all appearances say it must a suicide and all reason says it cannot possibly be so. And Thornett's storytelling pulls the reader just as an expert angler knows how to pick the perfect lure. The manner in which Inspector Beale approaches solving the crime is both entertaining and gripping. True to the style of most Golden Age detective novels Policeman's Holiday is also gussied up with maps and diagrams, including one that shows how nearly impossible it was for the victim to have committed suicide. 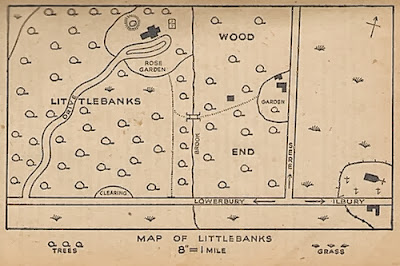 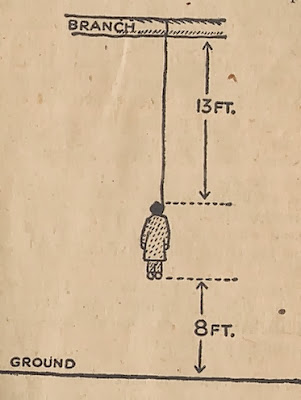 The pièce de résistance of Rupert Penny's detective novels is his gimmick of the "Interlude." Occurring a few chapters from the end these breaks in the narrative are similar to Ellery Queen's "Challenge to the Reader" in which the reader is asked to pause, mull over the story, sift through the clues and toss out the red herrings, and come up with his solution before turning the page and reading the actual revelation of the murderer. Just as with Queen a Penny "Interlude" is akin to a medieval knight tossing down his gauntlet. You're in for a real battle, albeit a battle of wits if you dare to take up the gauntlet and attempt to figure out the solution of a Rupert Penny mystery. I've failed three times so far. And as for that acrostic -- I managed to figure out one of the eight diabolically clued lights. I'd be willing to bet a wad of money that no one will be able to get both solutions to that particular puzzle.